A film that steps back from the frenetic pace of most modern blockbusters Blade Runner 2049 is both a satisfying sequel to a classic yet also a strong movie in its own right. I would caution that it’s probably not for those who find sci-fi films slow because its runtime of two hours 43 minutes will test the attention span of the uncommitted. However if you do go with it you’ll find it to be an absorbing and surprisingly human glimpse into an alternative future.
Spoilers beyond this point 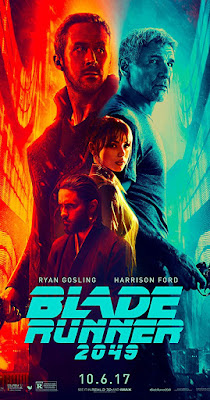 The issue with sequels is how they build on the foundation of the original convincingly and this is definitely a model for how to achieve that. We open with replicant detective K –a serious Ryan Gosling- whose routine call to a remote farm starts a trail that soon appears to have a personal connection. Along the way he starts to question the nature of his supposedly implanted memories and what that means. In other words he is having a bit of existential crisis something which is subtly woven through the narrative. There is a connection with Deckard of course and the search becomes both literal as well as mental. What impresses about the narrative is that the plot is fairly linear and straightforward with just a couple of turns you might not expect- or you may even have guessed – yet raises issues of identity and belonging with which anyone can associate. In such a hard, rainswept, polluted, mechanical world it is surprising that the film sometimes feels so human.
Of course we are now just a couple of years away from the year in which the original film is set and clearly –unless certain world leaders go truly rogue- the world won’t be looking as it does in the 1982 film. Pleasingly this sequel does not attempt to retro- fit any of this enjoying the same aesthetic as its predecessor street food, rain and all! This time round product placement is less in the advertising displays perhaps wary of the fact that some of the names in the first film are no longer around. 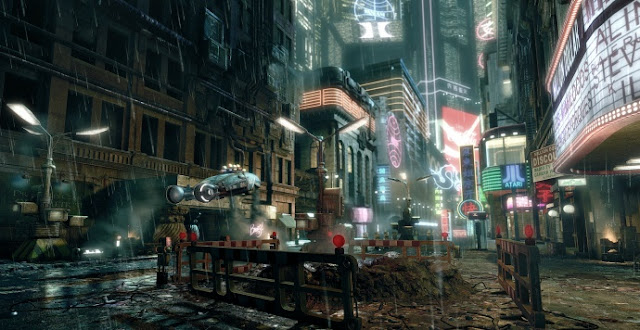 Punctuated by bursts of realistically painful looking scraps, crashes and explosions the overall tone is measured and accompanied my music that echoes the synthesiser heavy score of the first film. Of course there’s plenty of impressive cityscapes but pleasingly much of the smaller locales, crafts and devices are real looking. This lived in polluted world has become something of a cliché since Blade Runner itself but it’s presented here from new angles and perspectives. There's also incidental music that echo the synth heavy score of the first film but also adds odd bursts of weird noise rivalling Dunkirk for best incidental score this year I'd say.
Where this future does jar a bit- and which has been flagged up generally- is in the portrayal of women. It is very noticeable that all the holographic adverts depict often naked women and they don’t even balance this with similarly unclad males. This aspect coupled with K’s use of a female holographic surrogate partner in particular a scene where she inhabits an real woman does suggest a very male view of the world.  However there are two major femle characters cast in more recognisable roles as K’s hard bitten police boss and the chief antagonist’s henchwoman.
Having said that both actors nearly steal the film. Robin Wright is a fresh take on a role that has probably been done in every possible way. Here she is visibly tired yet fair, wanting to help K’s personal search yet contained by the rules. You feel there’s a very interesting story for her somewhere. Meanwhile Sylvia Hoeks is tremendous as antagonist Wallace’s enforcer Luv. Full of venom and a match for anyone, male or female, she comes across in combat she has the relentless drive of reminiscent of the T1000. 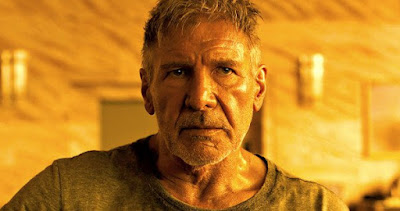 Jared Leto on the other hand may feel short changed again here after a lot of his work was edited from Suicide Squad. His Wallace gets two lengthy scenes but the character is an odd fit despite weird eyes and a rather interestingly decorated lair. Of the two main stars Ryan Gosling allows flickers of emotion to occasionally cloud his face in an otherwise controlled performance that sells the film well while Harrison Ford is as grizzled and stoic as you expect when he turns up later on. The film doesn’t though veer down any nostalgic avenue as Deckard is reconnected to events of the past, instead Ford’s grim countenance deals with it as matter of factly as a carpenter would. Perhaps this role is as close to the real actor as we’ll get.
You may start to feel an air of contrivance and coincidence as things progress but this is all explained later. Though the central mystery may seem slight it easily fills the running time.  The ending does what few big films manage these days and leaves the best axtion sequence till last ; its smallish in scale but far more exciting than cities being trashed. And the final scenes also leave a very wide space for a third film.
Blade Runner 2049 has already been hailed as the best ever sequel and a classic which is perhaps overstating it but it is certainly an excellent sci-fi movie with a strange heart and winning story.