Reviewed by Chris Arnsby. Mike Read: "Hello gang. Welcome to Top of the Pops. Terrific show lined up for you tonight, lots and lots of fab artists starting off with Dexy's Midnight Runners and Come On Eileen."
[2] Dexy's Midnight Runners: Come On Eileen. Where's Mike Read been? He last presented Top of the Pops in February. Why is Kevin Rowland the only person allowed to wear a shirt under his denim dungarees? How repulsed are the audience that Dexy's Midnight Runners are performing with no shoes and the raised stage places their stinking feet at face level? So many questions with no answer.
[3] Yazoo: Don't Go. An endearingly bonkers video in which Vince Clarke (and his stupid hair) makes a Frankenstein, and then dresses up as Dracula to menace Alison Moyet. The relevance of all this to song is tenuous but it looks like everyone is having a great time raiding the dressing-up box. 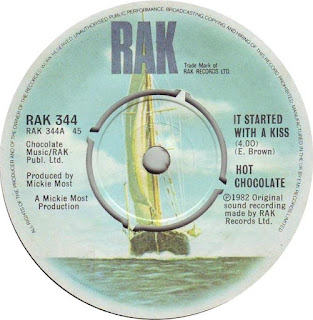 [7] Hot Chocolate: It Started With A Kiss. The studio lights are turned up a little higher this week, so it possible to get a glimpse of all the behind the scenes magic which makes Top of the Pops possible. There's a whole army of people standing behind the keyboard player, it's not clear what they're doing but they're not in the Top of the Pops studio to have fun. There's a nice shot from behind the band in which a camera crane is lead across the studio. And best of all, in the camera pull back at the end of the song there's a man at stage left who is using a desk fan to waft smoke in the general direction of Hot Chocolate.
(John- And it goes without saying- as Chris has obviously not said it- that this is one of the best pop songs ever created. If you listen to the lyrics and Errol Brown’s vocal it is heart breaking.)

[14] Cliff Richard: The Only Way Out. It's Mike Read's great mate Cliff Richard. Is this why Mike Read returned to the Top of the Pops studio? Sadly Cliff appears via a repeat performance from the 15/07/1982 edition and so the pair don't get to meet.
[33] Elkie Brooks: Nights In White Satin. Suddenly a lot of people in the audience are wearing t-shirts with pictures of Arthur Daley; all will be explained soon. First, here's Elkie Brooks to sing a song which I always assumed was called Knights In White Satin. I guess I never really thought about whether white satin would be a practical thing for knights to wear; also I guess I never really listened to the lyrics. During the instrumental Elkie Brooks turns to face the keyboard player and guitarist. It's not clear what's going on but the keyboard player keeps grinning, and the guitarist keeps smiling and shaking his head. (John- I thought it was `knights` too and we used to wonder what they did sit in?)
[28] The Firm: Arthur Daley (‘E’s Alright). Oh. It's another of those novelty songs I loved when I was -counts fingers back to 1982- ten. It's not terrible, but it's clearly not as good as I though back when I'd tune in weekly hoping it would be played. I am struggling to work out the appeal to ten year old me of this piece of sub-Chas n Dave chaff. How come I remember this and not The Brat with Chalk Dust especially as this is week two of a four week period starting 22/07/1982 when The Brat and The Firm alternate each week. I think it was the novelty of seeing a song which directly referred to another programme, and, even more extraordinary at the time, a programme on the other side; *clutches pearls* the commercial channel! That kind of cross-media melange (ooh-la-la, check out MarshallMcLuhan there) was much rarer. Irene Carr's Fame didn't count because that was just the theme song. And I liked Minder, so therefore I liked this song which directly referenced Minder. There's more opportunities to see the mechanics of Top of the Pops in action; at the start of the song keep an eye out for Mike Read sloping off from the back of the set, something which the host is normally careful to do when they're off camera; and a big round of applause for man with fan who is back wafting smoke across the stage for that authentic 1980's pub look. Unusually for a show normally recorded as live there's also a dirty cheat of an edit at the end of the song. Mike Read appears surrounded by adoring audience members when the previous end of song camera pull back showed he was absent.
Pop fact: this is the second single this year to have the name Arthur in the title. There was also Arthur's Theme by Christopher Cross which, appropriately enough was featured back in February on the last edition of Top of the Pops presented by Mike Read.
[20] Paul McCartney: Take It Away. Another chance to see this Paul McCartney video. If someone's fixing the fuses in the cupboard under the stairs at the start of the video then there's not much point in Paul's band using that electric guitar and microphone in the front room. [15] David Essex: Me And My Girl (Night-Clubbing). Another mannered performance from David Essex which gives the impression he thinks 90% of being a pop star is waving your arms in a memorable way. I quite like this song but I'm baffled by it's chart performance. Who was buying this? I can't believe it was filling the floor in discos.
[1] Irene Cara: Fame. The show closes with Gordon Elsbury's film of Irene Cara dancing around in New York. This week the film is allowed to run right to the end and we see that Irene Cara ends her routine with a salute to the camera and a round of applause from the crowd; aah! Meanwhile Gordon Elsbury is credited as Director. Michael Hurll must be off on holiday.