Sinbad and the Eye of the Tiger

How you respond to a film like Sinbad and the Eye of the Tiger depends on how you approach it. If you’re looking for flaws and things that just don’t match the sleek effects of today you’ll find plenty. If you’re willing to indulge the entertainment of another age then you may find yourself enjoying the ride. Forty years old this year, the movie comes alongside the other two big screen Sinbad outings (reviewed last month) in a well presented box set including both DVD and Blu-ray versions. 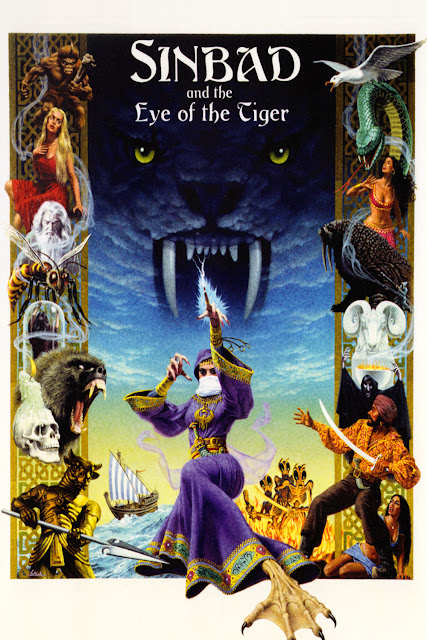 Crown Prince Kassim of Charak is having a bad day. Not only has he been turned into a baboon but unless he can be changed back “within seven moons” his evil stepmother Zenobia (who changed him in the first place) will take the throne. Worse still the longer the transformation goes on the more baboonesque the prince will become, a change we see happening as the film progresses. Early on he’s still playing chess, later he knocks the pieces onto the floor.  Luckily for him Sinbad and his crew are on hand to take him to the lost island (is there any other type?) of Casgar where the only person likely to know how to break the spell, a Greek alchemist called Melanthius is rumoured to dwell.


If you’ve seen the previous two films you’ll by now be noticing a lot of similarities – the plot is more or less both of them spliced together so instead of a shrunken princess there’s a prince turned into an ape. Instead of a villain who ages whenever he casts a spell, Zenobia ends up with a rather ridiculous looking webbed foot when she changes back from being a bad gull. There’s a one eyed giant again the twist being he’s friendly and not a Cyclops- nope he’s a Troglodyte. And when everyone reaches the final destination it is similar to the fountain of youth only it is the centre of the elements. There’s even some skeleton like creatures early on and a monster vs monster showdown to enjoy at the end.


The plot is more ambitiously ranging than the relatively confined ones of the previous films but it is this that creates problems with too much travelling padding out a flabby middle section. It also means creating a believable cold environment in the latter part of the film doesn’t really work. Superimposed snowflakes and stock footage of icebergs would probably suffice for a tv show but for the big screen and even on DVD it looks very cheap. Some of the model shots of ships work better and director Sam Wanamaker does his best to imbue everything with a sense of wonder including some innovative shots particularly early on. He also uses hand held camera for some moments, less common back in the 70s. Wanamaker seems to have an eye for the best shot- there are several excellent ones that would make great 70s album covers! 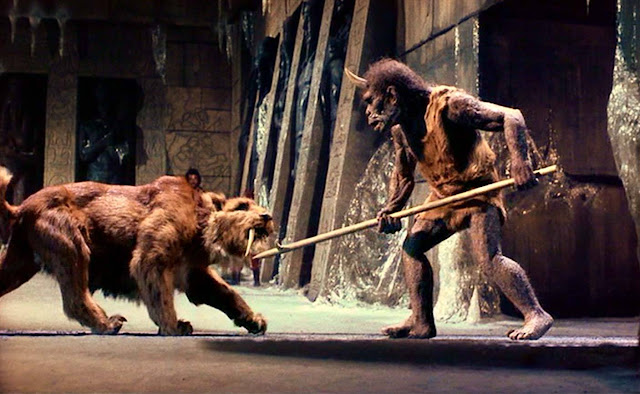 The production team apparently wanted to move away from the mythical creatures of previous Ray Harryhausen epics to focus on more recognisable prehistoric animals, a decision that yields mixed results. The problem with the giant wasp is that it is in a confined indoor space so it proves more difficult to show a seamless interaction with the humans it’s buzzing at. This is presumably why the classic Harryhausen moments occur in the middle distance where the differences between the stop motion and the human characters is easier to disguise. The choice of a giant walrus is rather random as it’s not an animal with much body movement hence it looks rather static. Mind you it does prove to be rather dangerous. The production is on firmer ground with the bronze Minoton though it never gets a fight scene and a Smilodon that appears near the end to battle the Troglodyte in the best staged effects sequence in the film.


Margaret Whiting has a good reputation as a stage actor and brings a very expansive performance to bear as Zenobia which you could only get away with in a film featuring a giant walrus! It does make you realise though how subtle by comparison Tom Baker was in Golden Voyage. Madge bellows in a peculiar accent that calls to mind Eastern Europe rather than the Far East. Combined with her gulls foot and somewhat dubious relationship with her son (just what is going on there?) she is an odd character indeed.Once again a Doctor Who alumnus carries the film. In this case Patrick Troughton who of course had form when it came to pretending to be awestruck by silly monsters and pitches his performance just about right as the excitable Melanthius complete with enormous beard that is half the size of that walrus.
As ever our other heroes are not especially interesting. After three attempts the conclusion must be that Sinbad is too dull a character for anyone to portray interestingly on film. He’s a cipher for the narrative and little more and, like his predecessors, Patrick Wayne does his best with the flimsiest of material. Both Carolyn Seymour and Taryn Power acquit themselves better though it seems a little crowded with both of them trailing around looking frightened and I found out afterwards that the latter was added at the last minute. Even so they are only there to look glamorous, scream and play chess with a baboon which I suppose shows how 70s culture had a way to go when it came to women’s roles. It is difficult to credit that Alien’s Ripley was only a couple of years away.


When Sinbad and the Eye of the Tiger is good it’s entertaining enough but lacks the vigour of the first two films whose signatures it tends to repeat with creatures not quite as interesting this time round. By the sound of it the proposed but unmade fourth film Sinbad Goes to Mars might have been a better idea.