Reviewed by Chris Arnsby. Peter Powell: " Hi! Welcome to the party! Another edition of Top of the Pops! On the show tonight we've got David Essex, Cliff Richard, we've got Visage, Japan, Dexy's and many others but for starters Hot Chocolate with ..!
[12] Hot Chocolate: It Started With A Kiss. A slightly slower tempo song than is normally used for the first performance, but it's great so who cares.
[30] Paul McCartney: Take It Away. Ooh look Ringo's in this slightly self-aggrandising Paul McCartney video. And John Hurt. On this occasion an alien doesn't burst out of John Hurt's chest.
[35] Cliff Richard: The Only Way Out. Ugh, it's Cliff and he's wearing nasty leather trousers. Apparently this song is about God, which explains why Cliff Richard keeps pointing up on the line "and it's yooooo."
[24] Yazoo: Don't Go. I am turning into my nan. I find myself annoyed by Vince Clarke's fringe. Could the real reason why he left Depeche Mode be because Dave Gahan wouldn't let him grow stupid, floppy hair at the front of his head? 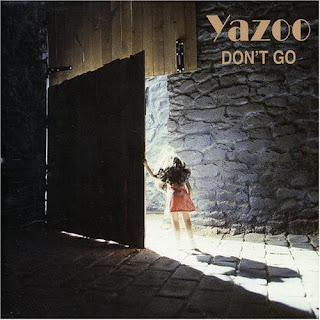 [28] David Essex: Me And My Girl (Night-Clubbing). "He's got a hit TV show!" enthuses Peter Powell as he introduces David Essex. Mr Powell is referring to David Essex's Showcase. Saturdays on BBC1 (there's a coincidence) in the coveted just after 6pm slot. "From the Harrogate centre," reveals BBC Genome. In fact BBC Genome also reveals that the show was such a hit that the BBC didn't dare bring it back for fear of ruining the audience for all their other programmes. Fans of diabolical scheduling might like to check out Saturday 17th July 1982 when David Essex was wedged awkwardly between the film Captain Nemo And The Underwater City (written by Pip and Jane Baker, Doctor Who fans will recoil at those names) and The Little And Large Show ("special guest appearance Kevin Keegan"). What's on the commercial channel?
[20] Japan: I Second That Emotion. "Now the public demand was so much for Japan's er release I Second That Emotion... that it's been proved and in the chart at twenty." Come again? Japan are on video. They have better fringes than Vince Clarke. 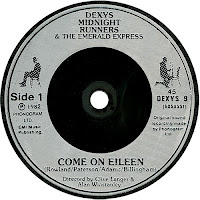 [31] Dexys Midnight Runners: Come On Eileen. This has been a bit of a low energy show so far (Hot Chocolate and Yazoo excepted) and then as Peter Powell babbles away about something Come On Elieen's violin introduction kicks in. It's a real Proustian rush and one of those moments where the Top of the Pops repeats really pay off because it's a chance to see an iconic song in its natural context. Here's Come On Eileen removed from all it's history and baggage and expectations (and over-exposure at weddings) and at a point where it hasn't even nuzzled into the top 30. The audience response gives some clue that this is going to be massive.
[23] Leo Sayer: Heart (Stop Beating In Time). A repeat from the 24/06/1982 edition presented by D*v* L** Tr*v*s. It's probably unfair to pick on Leo Sayer because frankly most songs would suffer coming after Come On Eileen but this is just bland. Cliff Richard and Leo Sayer could have swapped songs and no one would have noticed. The most notable thing about this clip is the set design -which hasn't recurred in any of the repeated shows- and some unusually flat lighting.
[14] Visage: Night Train. Two weeks ago Visage came into the Top of the Pops studio for the first time. Evidentially Steve Strange didn't much like it because here's the video for Night Train. It's fine except that among all the stock footage of pistons, etc, we see Visage driving around first on a motorbike and sidecar combination, and then in a car (and then finally in what appears to be a glass fronted lift with a lit firework dangerously attached to the underside). The song's called Night Train. Was it too hard to get down to the Nene Valley Railway? 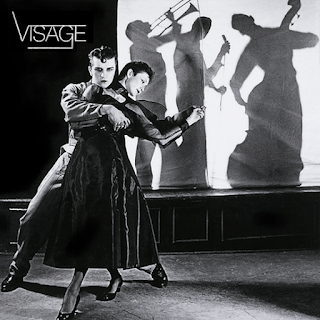 [1] Irene Cara: Fame. Gordon Elsbury continues his yo-yo BBC career by this week being credited as Film Director; he's previously been Director and Production Manager. His final salary pension will be a nightmare to calculate. This week he was in Hollywood for some reason where he filmed a grainy and poorly rehearsed message from the cast of Fame who weren't needed on set. Apparently this film was sent back from America hooked to the wheel of a passing 747. The state of it. It's faded, and covered in dirt and scratches, and the picture jumps at each edit. It's a shock to cut to Irene Cara also on film but properly lit and standing in a world of colour and non-muffled sound. After nicely thanking the BBC audience for buying her song she launches into a specially shot promo film. The film is wonderful because it's filmed around New York and its citizens react in various ways; most crowd round and stare at Irene Cara without recognition making the assumption that if a camera is pointing at her then something interesting must be happening; some stare blankly into the camera; some walk through the shot with grim determination; others mill around threateningly and follow Irene Cara like the prelude to a mugging. Irene Cara rises above all this and dances unselfconsciously for the camera. What a trooper.
[26] Dollar: Videotheque. The show closes as the audience dance to Dollar. Right at the back of the set is a woman who appears to have balanced an electric blue coloured model of the Tyrell Building from Blade Runner on her head.