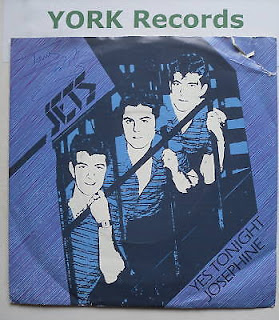 The Jets: Yes Tonight Josephine [25]. The 1981 Rockabilly revival cannot be stopped. It has the momentum of lava flow. Unfortunately for The Jets this performance is better known for featuring a pre-Culture Club Boy George bogling away to the rhythm of the Double Bass. Take note of Boy George's stagecraft. He's barely visible in the opening wide shot of the stage (at the far right of shot, he's effectively obscured by the glare of a spotlight on smoke), but he's carefully positioned to be front and centre of the screen when the camera cuts to a side shot of the audience. Although this does mean leaning forwards to avoid being blocked by another audience member. A girl who's dancing with her back to camera. (The poor dear doesn't have the faintest idea of how to be in the Top of the Pops audience. Where is she today? Nowhere). Everything else just seems to be a matter of chutzpah. Gradually he edges forwards- without ever being seen to do something as gauche as stepping into shot- and suddenly he's in the background of every shot of the lead singer; trespassing onto the forbidden dancing area reserved for the professionals of Zoo. Meanwhile at the front of the stage the lead singer of The Jets does something complicated involving playing the Double Bass while laying flat on the floor. Nobody cares. When the song is over Boy George grins, waves his hands in the air, and then turns to move back into the audience before the Floor Manager (Annie Ogden) can shout at him. And that boys and girls is how you get to be a Pop Star.


Earth, Wind & Fire: Let's Groove [3]. An incredibly bad for the eyes video. All star filters and over-saturated glare. It looks like holiday photos from Earth, Wind & Fire's trip through the Star Gate.
Toyah: Good Morning Universe [23]. Speaking of taste and understatement here's Toyah. Is this the point Toyah tripped over into a parody of herself. The orange fright wig is bigger than ever. The voice keeps going UP and DOWN to greater extremes. The dancing is all floaty gestures and waving arms. If you asked The Two Ronnies to do a Toyah spoof this is how they'd get Ronnie Corbett to look.
Cliff Richard: Daddy's Home [15]. Where's Boy George? There he is standing close to Mike Read during the introduction for Cliff's new single Daddy's Home. The video is dreadful. Cliff mooches around inside a bizarre eighties style sleazy fifties pool hall. The ennui is overpowering as he dials his bad boy charisma up to the max (translation, the make-up artist has given him some stubble). If you've ever sat through a bad school version of Grease then this will give you post-traumatic flashbacks. "Don't forget Cliff's series on BBC2 every Monday night. Part two's coming up next Monday." Mike Read reminds viewers at the end of the video. According to BBC Genome this would be Cliff!, 20.10 Monday 30th November. "2: Why Should the Devil Have All the Good Music? What do Kenny Everett Dave Lee Travis , Adam Faith Olivia Newton John , Mike Read and Pat Boone have in common? They all appear in tonight's programme, taking a closer look at the Gospel side of Cliff. With special concert coverage from his recent British tour, a barrage of questions from students in Manchester and footage of Cliff's visit to a foot-stomping Black Gospel Church in the States, this programme explores a side of Cliff rarely seen on British television." A side of Cliff rarely seen on British television? From memory you couldn't stop him banging on about his religion. Pass. But I will tune in earlier at 17.40 for The Five Faces of Doctor Who repeat of Logopolis part one, followed by The Adventure Game (John Craven , Bill Green and Kirsty Miller try to rescue Leslie Judd).
LP Chart: "Right now for the first time on the Top of the Pops it's the LP chart," says Mike Read. Oooh a new feature. (What about Jonathan King's monthly US Chart Rundown? Shh! BBC4 has been quietly ignoring that and I think they've got away with it.) This is exactly what you'd expect. The Top Ten LPs. Will Michaell Hurll continue with this feature? We'll find out next week.
Imagination: Flashback [28]. Halfway through the song Imagination give up all pretence of playing instruments and just dance along at the front of the stage. Vision Mixer Hilary West uses the Quantel's strobe button to good effect, and there's an interesting sequence of fast cuts when Leee John sings "flashback." It must have been pre-programmed. It's too fast to be done manually. Where's Boy George? Update. There he is. Exiled to the left hand side of the Imagination stage.
Ultravox: The Voice [18]. The latest promo film from Ultravox. Midge Ure is put on trial for crimes against symbolism. Captions occasionally float on screen; wireless; the press; the people; the law; command; etc. The captions reading bloated, self-indulgent, and sophomoric must have been lost in the post. (John- Harsh. I recall we all raved about this at the time)
Kim Wilde: Cambodia [24]. The presentation for this song is odd. Kim Wilde starts alone on one stage, and then walks via catwalk to other side of the studio. She finishes the song on a different stage accompanied by three members of Zoo doing robot dancing. It probably made more sense in rehearsal.
Kool & The Gang: Steppin' Out [14]. Kool (& The Gang) look smart in matching shirts, waistcoats, and trousers. But where's Boy George? Is he "steppin' out" of the Top of the Pops studio?
Number One: Queen & David Bowie, Under Pressure. "Well we've had lots and lots of letters about the Queen and Bowie video but they haven't done one. So as soon as they either do, or maybe they'd like to come on live, we'd love to see them. They've had a number one independently of each other, and now they've got a number one together. Queen and Bowie, Under Pressure." And with that convoluted introduction Top of the Pops launches into a collection of stock footage clips for all of 45 seconds. The small mystery here is that these few clips mostly match the ones at the start of the "official"video with some minor differences. Did the BBC get an early edit, or did the video producer like the way this looked and sourced the same clips? Who knows. We quickly cut back to the studio for audience dancing and credits, and a chance to see that Mike Read dances like George McFly at the Enchantment Under the Sea dance in Back To The Future. Boy George is AWOL.
Performance of the week: Kool & The Gang: Steppin' Out.