Bad Manners: Buona Sera [34]. What's Buster Bloodvessel wearing this week. A bomber jacket and tracksuit bottoms. That's disappointingly mundane. To compensate the stage has been decorated with old chairs, bicycle wheels, and a suitcase. Also the drummer has been set up on the grand piano and there's a man pushing a stuffed badger in a pram. All in a day's work for Bad Manners. The suitcase and bicycle wheels look like trip hazards. I hope the stage has been subject to a risk assessment.

Soft Cell: Bedsitter [4]. Marc Almond and the other one have been lured into the studio so we miss another chance to gawp at the video's footage of old London. The stage is done up like a padded cell. Why? No reason that I can spot. Recent political developments have left me humming this song to myself as "and now I'm all alone in Brexit land."


Status Quo:  Rock ‘N’ Roll [27]. David Kid Jensen dutifully informs us that, "Status Quo are at number 27 in this week's 30 with something very different from them..." Yeah right. I'll bet this is another song that goes DUN-DUNUN-DUNUN-DUNUN-DANUN-DUNUN-DUNUN-DUNUN. Oh, no it doesn't. Still I'll bet this is another video of them performing as live on an empty stage in front of a wall of amps. Oh. No it isn't. They're in the Top of the Pops studio. How about that. They're really ringing the changes. Except, they've brought the wall of Marshall Amps with them to provide emotional support for anyone who can't cope with this crazy new look Status Quo.


Duran Duran: My Own Way [26]. Towards the end of the song as the camera pulls back there's a bloke standing in profile who is right in the middle of the screen and absent-mindedly scratching his chin. He suddenly turns and stares into the camera lens. In the low studio light he's a dead ringer for Mr Spooner from Are You Being Served, played by Mike Berry. It might even be him. Mike Berry had appeared on Top of the Pops in 1980 singing The Sunshine of Your Smile (August 1980, fact fans). Maybe he was in TV Centre to record the 1981 Are You Being Served Christmas Special. Regardless, all this is more interesting that the rest of the Duran Duran performance.


J-n-th-n K-ng: US chart rundown: Unsurprisingly this has been edited out and we cut straight to...


Diana Ross: Why Do Fools Fall In Love? [5] Here's a better question. Why would Top of the Pops spend money and time replacing Legs & Co with Zoo, only to make members of Zoo duplicate the same tired old routines that were the cause of Legs & Co being replaced? Admittedly, this question makes for a less catchy song. Count the tired Legs & Co tropes. Love= hand on heart. Rain= descending wobbly fingers gesture. Why= exaggerated shrug. I= point to self. Etc. Etc. Ad nauseam.


Godley & Crème: Wedding Bells [21]. Talking of heavy handed symbolism here's the Godley &  Crème video for Wedding Bells. Look! The ring is handcuffs! Do you see! The bride is wearing a dress with chains! Get it! T'ch birds eh! They're only interested in one thing.


Fun Boy Three:  The Lunatics (Have Taken Over The Asylum [20]. Check out Neville Staple's disdainful glance to camera after the line "I see a clinic full of cynics." He's been working on that look in the mirror. Designer Barbara Gosnold has been hitting the Christmas eggnog early that's the only possible explanation for some of the set design in this edition. Fun Boy Three's stage is decked out like a jungle (possibly because of the weird backing track which sounds like chirping insects?) Still this does give Dorinda Rea, Costume, the chance to get a bit of a paramilitary theme going. 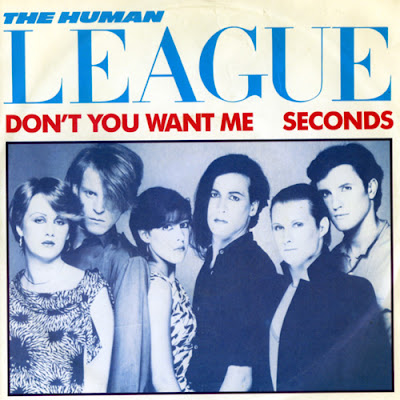 The Human League: Don't You Want Me [9]. Who? The Hoomun Leege? You'll never have heard of them before if you've only been watching the BBC4 repeats. A weird quirk of fate means they have exclusively appeared on redacted BBC4 episodes this year and so to all intents and purposes they've suddenly risen without a trace. Yes, The Sound of the Crowd, Love Action, and Open Your Heart all skipped. Although viewers with longer memories might remember their version of Rock And Roll which played once on the 08/05/1980 show presented by Peter Powell.


Number One: Julio Iglesias, Begin The Beguine. Who looks the most bored in Julio Iglesias' backing band? Is it the three dancers who disinterestedly sway their hips? Or the guy playing the guitar who seems to be repeating the same riff again and again? No! It's the grumpy looking bloke at the back of the stage who is standing behind an impressive array of percussive equipment but is only allowed to shake some sort of rattle.