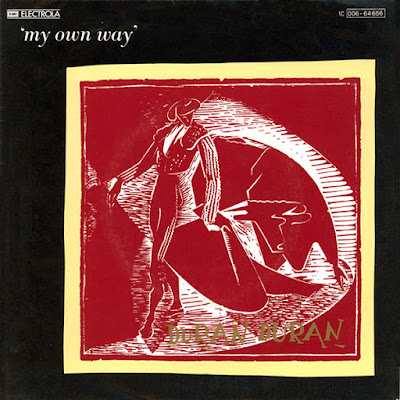 Cliff Richard: Daddy's Home [2]. Cliff's on video this week but it's not the video Top of the Pops showed on the 26/11/1981 edition (the one set in the bad-school-version-of-Grease pool hall). How many videos does one terrible song need? This time Cliff Richard is live in concert. Couples slow dance on stage behind him. At the end of the song a woman waves her partner goodbye and walks over and hugs Cliff as he croons "daddy's hoooooome to staaay." Is he supposed to be her dad? This nonsense is intercut with shots of the Top of the Pops audience dancing together. 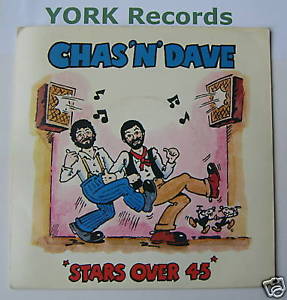 Chas & Dave: Stars Over 45 [36]. When Chas & Dave start satirising the medley craze you know it's gone too far. Ironically this may be the best medley ever (and what a back-handed compliment that is). Assorted members of Zoo are pressed into action as cheeky window cleaners, cheeky cockneys, and rabbits whose cheekiness has yet to be calculated. No members of Zoo are permitted to be the laughing policeman (harsh Equity rules, probably) and so a rouged up extra is permitted to enter the Top of the Pops studio. The laughing policeman is considerably older than the normal Top of the Pops performers and no doubt some terrible Logan's Run style incident occurred later while the cameras were focused elsewhere.
Godley & Crème: Wedding Bells [8]. Director Gorden Elsbury (who's been promoted up again from Production Manager. What is going on with his career? Does he get an improved credited whenever Michael Hurll takes a holiday?) gets Godley & Crème to walk down through the audience. Confetti is flung at the pair, while (erm) Crème (probably) constantly works through a bit of business he's developed where he pretends to check his pockets for the ring. Watching the crowd doing the "wedding bells" dance puts the popularity of this song into context. I'll bet they were all doing it in the discos. Two questions. Where the hell does that saxophonist pop-up from? He seems to materialise out of thin air behind Godley (probably)'s shoulder. And what's going on with that nasty edit towards the end of the song?
Brown Sauce: I Wanna Be A Winner [64]. Oooh. This could be ugly. I loved Swap Shop as a kid. I have fond memories of this song and I used to cross my fingers and hope weekly that it would be featured on Top of the Pops. Is this going to be yet another reverse-Proustian rush? Not quite. It's not a great song (it was produced in an environment containing B. A. Robertson) but it's got a couple of nice lyrics and I've some fondness for the Goodies-like line about "a box of OBEs." Having said that, the single is languishing at number 64. I call shenanigans. Top of the Pops is clearly trying to give it's BBC chums a leg-up. And on licence fee payers cash (© The Daily Mail). For shame Top of the Pops.
Rod Stewart: The Young Turks [23]. Gangs of dancers terrorise down-town Los Angeles on film.
The Snowmen: Hokey Cokey [40]. A gang of snowmen terrorise the Top of the Pops studio. Seriously, those snowmen are scary.
Jon & Vangelis: I’ll Find My Way Home [26]. "Susie is going to dance it for you," Simon Bates informs us. And she does. It's like a last hurrah for Legs & Co.
Status Quo: Rock 'N' Roll [12]. A repeat from the 03/12/1981 edition.
Number One: The Human League, Don't You Want Me. I'm not sure there's much left to be said about this song. It's brilliant. And I'm a big fan of the moody video (especially the shot where the camera pulls back to reveal its track and the edges of the set). On the chance that you are the last person not to have heard about the cocktail bar remix, then search Youtube for "working as a waitress in a cocktail bar". It's a version in which almost every line has been replaced with "you were working as a waitress in a cocktail bar." Warning. It will be inside your skull for days..
Closing Titles: Altered Images, I Could Be Happy.
Performance of the week: I'm not a fan of any of the studio performances this week. I'm playing my joker. No one wins.
24 December 1981
Christmas Eve and sandwiched between Little & Large and Are You Being Served is the last proper Top of the Pops of 1981 (both the Christmas Day and New Years Eve shows are compilations).
David Kid Jensen: "Coming at you live from the BBC Television Centre in London. Welcome to our Christmas Eve Top of the Pops and our first number is really something very festive, Wizzard I Wish It Could Be Christmas Everyday."
Wizzard: I Wish It Could Be Christmas Everyday [41]. The 1981 re-issue (obviously), which reached the dizzy chart heights of 41. Wizzard appear with a slightly stunned looking set of children who mostly remember to sing along. Oh-ho! There's a cake on the table. Could it be due to go in someone's face? Not quite. In best pantomime tradition Roy Wood does get it in the face but it's a different cake (two cakes, typical BBC waste). Keep an eye on the boy in the red shirt (who does the caking) towards the end of the song. The seriousness of his duty is weighing heavily on his mind. He turns round several times, waiting for his cue and checking Roy Woods' positioning. And then -oh no!- the moment goes to plan, but it's done on a slow zoom back across the studio so it's lost on screen. For shame, Vision Mixer Hilary West. You should have cut to a close-up. 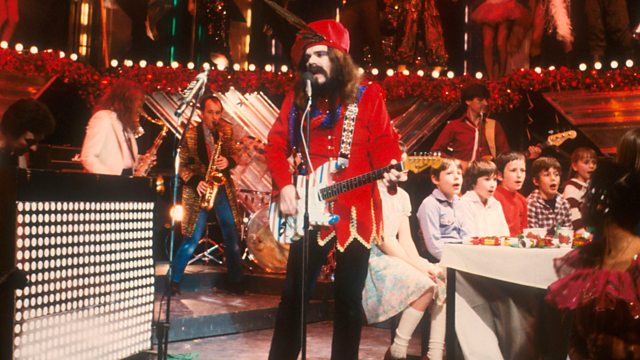 Adam & The Ants: Ant Rap [4]. After Imagination's Christmas message ("we'd like to thank everybody for making this an Imagination year!" wise words) we cut to Adam & the Ants on video. A chance for everybody in the studio to catch their breath and get ready for the next act.
Elvis Costello & The Attractions: Sweet Dreams [45]. Ooh two songs outside of the top 30. Top of the Pops is really spoiling us on Christmas Eve. "Live here in the studio live," as David Kid Jensen reminds us. Don't forget to tell the viewers its' live David. Live.
Bucks Fizz: The Land Of Make Believe [5]. We're ping-ponging from one end of the chart to the other. 41, to 4, to 45, and now up to 5. And here's the first live glitch of the evening as one of the two people credited with Lighting plunges David Kid Jensen into darkness by fading down the lights halfway through his Bucks Fizz introduction; before quickly fading the lights back up, and down, again. Take a bow Ron Bristow and Clive Gulliver. Live glitch number two: keep an eye on Cheryl Baker. During the musical break after the first chorus she keeps picking at her mouth. It looks like she's nearly inhaled some fake snow.
The Police: Spirits In The Material World [12]. David Kid Jensen, could you remind me if this show is pre-recorded or live I've forgotten? The presenter links into an as-live performance from The Police which is actually a sneaky repeat from the 10/12/1981 edition.
Kool & The Gang: Get Down On It [26]. Zoo capers away. They've mostly ditched the Mad Max post-apocalyptic leather gear for a more refined chucking-out-time-at-the-wine-bar look. The wide shots of the studio give a chance to study the audience in more detail. It's a smaller group than normal and the demographic looks a little older. Almost as if no one trusted the usual Top of the Pops surly teenagers to behave on Christmas Eve on BBC1.
Abba: One Of Us [3]. On video. Watch out for the alarming transition between a shot of Björn Ulvaeus and Agnetha Fältskog. The resulting brief image of Björn's face and beard with Agnetha's blonde hair and dress looks like Bill Oddie in drag.
Altered Images: I Could Be Happy [20]. Silly string wars break out halfway through the song. Someone in the audience gives the band a good spraying, but one of the guitarists has also pulled a can from somewhere and gives as good as he gets in return. It's not the worst silly string incident which will occur tonight...
Dollar: Mirror Mirror (Mon Amour) [9]: Poor David Kid Jensen is trapped on the catwalk behind Dollar. Unable to do the standard presenter disappearing trick (because the show's LIVE, David, LIVE) he's struck and forced to dance for the duration of the song. He does a reasonable job of it -he always was one of the cooler Radio 1 DJs- and emerges with some street cred left. "My mirror always echoes," sings David Van Day. That's weird. Mine only reflects.
Number One: The Human League, Don't You Want Me.  David Kid Jensen is slightly breathless and sweaty from his enforced bogling but he launches into the festive Top 10. Hooray The Human League are still at number one. Kudos to them for keeping Cliff Richard's dire Daddy's Home off the Christmas Number 1 slot. But what's this? Some diabolical fiend splurges Phil Oakey and Joanne Catherall with more silly string. He catches the pair right in the middle of a "don't you want me baby," and everyone, but particularly Joanne, does well to make it through to the end of the song.
Closing Titles: Philip Lynott: Yellow Pearl [47]. The show closed with the audience dancing to the new(ish) Top of the Pops theme music. The crowd are starting to get a bit rowdy and I suspect it was a relief when BBC1 could cut away to Are You Being Served. The plug for the Top of the Pops Christmas Party is played out by BBC4. This is a little surprising. Partly because that show is redacted due to the presence of certain people, and partly for the boring literal reason that it isn't on tomorrow -and the BBC doesn't like to broadcast anything which might confuse the viewer. Although admittedly this repeat did go out on 17th June and it's possible BBC4 realised that even the dimmest viewer wouldn't expect the day after to be Christmas.
Performance of the week:  The Human League, Don't You Want Me