Peter Powell: "Hi folks! Welcome to the party! There is a Caribbean atmosphere and nine live acts for you to enjoy.! This is Top of the Pops and everybody salsa with Modern Romance!"
Modern Romance: Everybody Salsa [16]. The studio is insane this week. It's as if Michael Hurll looked at the Japanese/Latin themed Conga line that ended last week's show and challenged himself to go further. Legs & Co are dressed as playing cards. Two people are running around dressed as jesters -or could they be Jokers for the card set? Streamers are being waved. And there is a baffling selection of hats; fez; shiny party hats; crowns; and some bloke at the back wearing a white chef's hat.
John Foxx: Europe (After The Rain) [40]. Europe After The Rain features a piano so Designer John Coles has planned the stage with a right classy look; big white grand piano, some greenery, and classical busts. Shepherds Bush as Athens reborn. Alas, the grand piano is too massive to fit on the stage and has to be left at the awkwardly on the floor at the front where the audience keep leaning on it like philistines. Also, where's John Foxx's drummer gone? (John- Maybe he’s inside the piano?)Unless that statue is playing them?


UB40: One In Ten [7]. A repeat from the 20/08/81 edition hosted by D*v* L** Tr*v*s. "We caught 'em before they went off on tour!" Peter Powell informs us. I don't recall Top of the Pops ever highlighting repeat performances before. Evidentially something happened to them between 20th August and 3rd September which meant viewers would know this was not recent footage. Peter Powell is so frantic to ensure that the home audience know the footage was recorded before UB40 were devoured by Nyarlathotep/taken hostage by ottomans/had a life changing encounter with a barnacle goose [delete as applicable] that he mentions it again at the end of the song. "That's UB40 and the Top of the Pops cameras managed to get hold of them just before they went off on tour." What happened on that tour?
Bucks Fizz: One Of Those Nights [32]. Bucks Fizz have decided to slow things down after Making Your Mind Up. Julian Cope will be up next singing Passionate Friend so over to his autobiography Head On [background information Julian Cope has spent the day taking naughty substances].
"A group called Buck's Fizz were doing their thing on the other side of the studio. They were a two-boy, two-girl, fun group with cutesy expressions and dance routines. We were to follow them. I watched fascinated. Then as time moved slowly on I felt sucked into their scene. God, they were brilliant. I wanted to be in Buck's Fizz. I rushed over to Gary and hit him with the idea. The two of us should join. Imagine an acid-soaked dance group with showbiz routines, it would be incredible."
The Teardrop Explodes: Passionate Friend [33]. Sadly the proposed Bucks Fizz/Teardrop Explodes team-up never took place. We'll just have to make do with Julian Cope wearing an orange top, leather trousers, and standing barefoot on John Foxx's piano while trying his best not to freak out.
"The finish of the piano was unbelievable. I waded in its high gloss black syrup, my bare feet sinking deeper and deeper into the surface like hot wet tar on a newly completed road. It was all I could think about. 'Don't jump around too much, Copey. It'll cost us a fortune if you wreck that thing'. Oh, thanks a lot, Batesy. Thanks fucking loads. That's just what I want to hear when I'm tripping on live TV."
Gary Numan: She's Got Claws [6]. On video. "She's got claws!" says Peter Powell camply scratching at the air by way of an introduction. Two moments stand out in this video. The first when Gary Numan is outside wearing his leather coat and he looks like dead ringer for Herr Flick from 'Allo 'Allo. The second is when Gary sits staring bored (in other words his usual shtick) as three women caper around dressed as cats. It looks like the worlds worst private performance of Macavity the Mystery Cat. 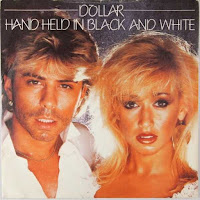 Dollar: Hand Held In Black And White [31]. Miss Torquay, and also Miss Radio 1 Roadshow 1981, better known as Jill, stands awkwardly next to Peter Powell as he once again scratches at the air, the universal symbol for claws. Jill was introduced properly between Bucks Fizz and The Teardrop Explodes and then escaped while Peter Powell was introducing Gary Numan. Now she's been recaptured and given a balloon. There's some small irony in Bucks Fizz and Dollar being on the same edition of Top of the Pops given what later happened between Bobby G and David Van Day -have a look on Youtube for an edition of  BBC series Trouble at the Top called Making Your Mind Up. It's common for the host to disappear off set while the bands are playing but a wide shot of the studio reveals Peter Powell and Jill both dancing away; they're big fans of Dollar. But then... what's this? A later wide shot reveals Peter Powell all by himself. Orange alert! Miss Torquay has escaped again.
The Pointer Sisters: Slow Hand [29]. Legs & Co are performing on a record shaped stage and about twenty members of the audience have been kettled in the hole in the middle. It looks crowded and uncomfortable. 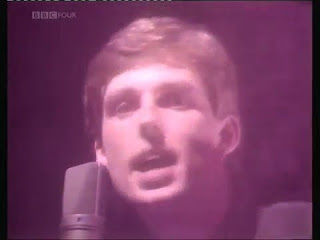 OMD: Souvenir [23]. Orchestral Manoeuvres in the Dark is too long a name to fit in the new look charts, so they're starting to be referred to as OMD. Eric Wallis has lit the stage in lurid shades of purple and red; with copious amounts of dry ice it looks fantastic and really matches the mood of the song. Towards the end of the song there's a cross-fade to what looks like the Top of the Pops slow dancing championship, and there's Jill NOT dancing with Peter Powell. He'll be furious when he finds out.
Number One: Soft Cell, Tainted Love. Marc Almond has really got the hang of this pop star lark. Much of this performance is a medium close-up of Marc, with the poor keyboard player only getting an occasional glimpse on screen.
Closing Titles: Funkapolitan, As Time Goes By [47]. Suddenly Gary Numan is in the studio, and he looks quite cheerful. He's got his arm wrapped round a female audience member but because he's on a podium and she's not it looks like he is attempting the Vulcan Neck Grip. The show closes with massed dancing to Funkapolitan and the set wobbles alarmingly in the background; but I'm sure its all been checked by BBC Health and Safety Mandarins.
Performance of the week: The Teardrop Explodes, Passionate Friend