The Eighties and it's music faithfully recreated in John Carney's delightful latest film.
It’s good to know that there are still smaller more personal films that are not depressing or cheap horror still being made and Sing Street, just released to buy, is a little gem. Telling that age old but still engaging coming of age story it is also suffused with the 1980s in which it is set. It’s odd to consider that such an era is now `historical drama` because I remember it well! As it seems does director/ writer John Carney (who also brought us Once) because he has assembled a movie that mirrors the moves of many an Eighties teen film yet relocated the narrative to a Dublin that is a long way removed from the middle class settings of Pretty in Pink and company. It works a treat and as a bonus you also get a clutch of sings cheekily inspired by period hits yet still sounding fresh.


In 1985 teenager Conor Lalor's family is in financial and emotional turmoil. His parents are constantly rowing and now times are hard he is moved from a cosy public school to a strict institution run by the Christian brothers. His own brother languishes at home inspiring him to new listening experiences yet not participating in much at all except smoking pot. Conor soon finds the school is a brutish authoritarian place where not having black shoes is considered an act of cardinal rebellion. As if all this weren’t enough he’s spotted ultra- cool girl Raphina whom he is instantly attracted too. “I think she’s this amazing human being” he declares. He informs her he wants her to appear in the video his band are making. Course there is no video or even a band so he sets about creating them! 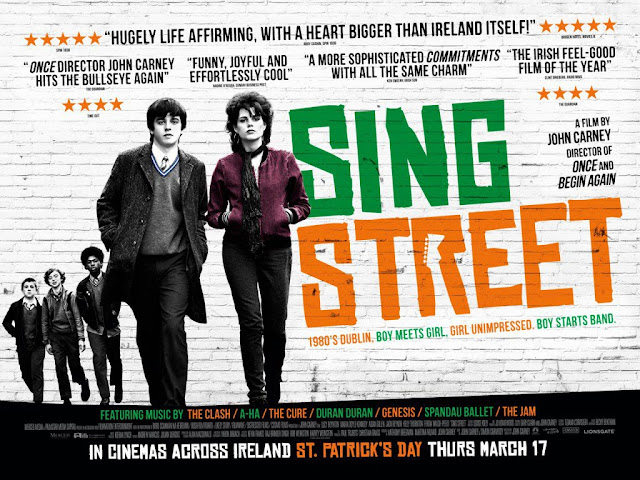 The resulting developments are a delight. Eschewing the usual people joining and leaving and rehearsal rows, Carney illustrates a more harmonious outfit where song writing is conducted between Conor and multi- instrumentalist Eamon. Amusingly whenever Conor sees or hears a song he is inspired to write something similar. And he goes from being “a futurist” to being “Happysad” while hile the songs the band – christened Sing Street in a play on the school’s name - perform are catchy yet oddly familiar. So the group’s eclectic repertoire includes songs that sound very like Duran Duran, Depeche Mode and Hall and Oates. While the film’s roots may lie in one decade it also celebrates the timeless idea of getting a band together and communicating through music. Gradually Raphina’s frosty exterior thaws and there is a growing mutual attraction between her and Conor though she remains enigmatic and prone to random behaviour.
Conor makes an interesting central character; again bucking the trend to make him some put upon wallflower Carney soon has him standing up for his individuality whether against bullies or teachers while sporting an increasingly bizarre image. If this was an 80s film he would have been played by Jon Cryer; though he is actually played by Ferdia Walsh-Peelo, a young musician for whom this is his first acting role something you would never know. The character grows in confidence throughout leading to a glorious re-creating of one of those 80s high school dance sequences when the band perform at the end of term. 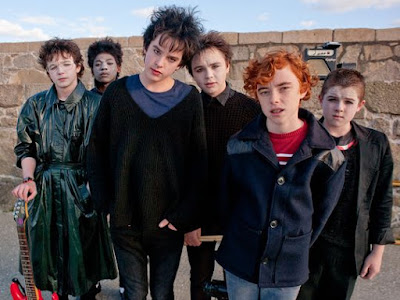 Mark McKenna too is amusing as the deadpan Eamon and there’s a great performance from Jack Reynor as layabout brother Brendan who is more important to the action than you first think. He is both an inspiration and a frustration to Conor but also to himself and near the end there is a bittersweet moment which sums up the character brilliantly. Lucy Boynton is perfect as Raphina conveying that untouchability yet gradually becoming more vulnerable; the scenes between her and Conor are beautifully judged as their relationship evolves.
The film is slightly less successful in introducing staff abuse into the equation which feels like it comes from another place though is well payed off during the final minutes. Plus you can’t complain about a the ending which involves a reckless escape that somehow seems as joyous as it should whatever the peril. This is a film you might think you know from a synopsis but it is filled with little bursting balloons of fun and nuggets of truth that make it a sheer delight. 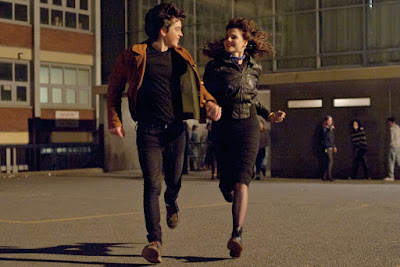 The Best of This Way Up Volume One includes features and reviews on The Ghosts of Motley Hall, Watch with Mother, The Feathered Serpent, Sky, Tom Grattan’s War, Richard Carpenter, Strange, Firefly, Out of this World, Handmade Films, Jaws, Nigel Kneale,  Second Coming, Phillip Saville, The Comic Strip Presents, Adverts, War Horse, Pluto, The end of record shops and much much more! Available now from Amazon in print or Kindle ebook format. Buy The Best of This Way Up Vol One