There is something holding Midnight Special back from fully realising its potential. An enigmatic sci-fi slowburn with some superbly visual moments and a streak of realism ingrained in even the most unexpected development Jeff Nichols' film draws particularly from two classic sci-fi movies. Yet lacking the warmth of ET or the sheer sense of wonder that Close Encounters of the Third Kind evokes it just doesn’t reach the same level. Part of that may be because of the times; would we now be so entranced by a film that is not about alien invaders or battles but simply a survival story? Perhaps to compensate for modern day cynicism the presentation is mostly grim and hard edged occasionally interrupted by flashes of special effects. The plot is straightforward in an age when we perhaps expect surprises and spoilers. To say that there are really none makes the film sound dull, which is isn’t, but by the time of the big visual reveal the viewer may well have settled too far into the everyday to accept such a sight. 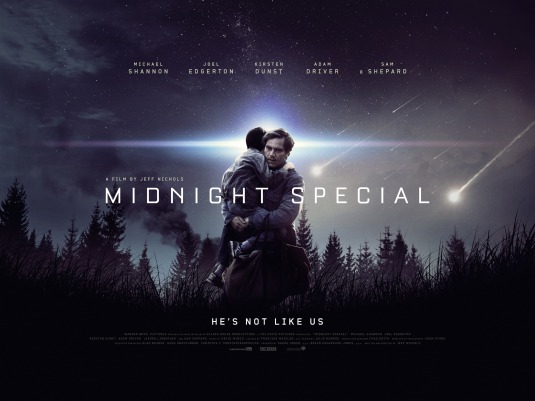 We open in the aftermath of apparent kidnap of a young boy called Alton Meyer by a man who turns out to be his natural father. This part is revealed via news bulletins as Roy Tomblin together with bodyguard Lucas travel at night time. While this is partly to avoid attention you wonder why the kid is constantly wearing googles and reading comic books. The opening third of the film is intriguing enough; it is revealed that Roy has taken his son back from a religious cult who are subsequently arrested and questioned by the FBI. Turns out young Alton has been spouting what the cult believe are incantations which they have interpreted as their scriptures. The FBI on the other hand know that these are actually pieces of top secret information gleaned from a US satellite.
It is suggested Alton’s mother abandoned him but there is precious little information as to how the scenario developed or where his father has been. The idea of the cult’s motivations is also brushed over rather too easily.  As the FBI and members of the cult close in, Roy takes Alton to the boy’s mother reuniting the family for an important journey.


There are certainly some excellently staged sequences especially when we first see Alton’s glowing eyes and a sequence in which pieces of a satellite crash to Earth. The effects are exemplary throughout contrasting with the grainy realism that otherwise prevails. Yet in the end it is the latter aspect that causes Midnight Special to fall short of expectations. An earnestness and general tone of self -importance ultimately deprives the movie of emotion which is even more surprising when you consider Nichols wrote the film after almost losing his own son to illness.


Outside of Kirsten Dunst’s concerned mother Sarah Tomlin none of the characters are shaped to inspire our empathy. Michael Shannon as Roy is saddled with monosyllabic dialogue that never allows us enough of a glimpse into what the character is thinking. Adam Driver’s nerdy but instinctive agent Paul Sevier is a promising wild card who seems to have some rapport with Alton but he is edged out before the end.  What is missing is a wider context, an explanation or even theory as to how we got here. At times it feels like watching a sequel without having seen a first film. Nichols never breaks out of his downplayed style as the action escalates meaning that the final reveal which should be a jaw dropping sequence seems strangely unmoving both to the viewer and many of the characters.


Even so there is no doubt that Midnight Special is often a superb watch. The predominantly night time filming is dazzlingly interrupted by the light inspired powers of the boy and the brightly lit interrogation rooms. The sci-fi sequences that punctuate the drama are staged and filmed with expertise. However straight forward the plot is, you still remain interested whatever the character shortcomings. Midnight Special is not too far from being a really memorable film- some warmer characters and a little more context would add a huge amount to what is otherwise a spectacle to be admired but not treasured.


The Best of This Way Up Volume One includes features and reviews on The Ghosts of Motley Hall, Watch with Mother, The Feathered Serpent, Sky, Tom Grattan’s War, Richard Carpenter, Strange, Firefly, Out of this World, Handmade Films, Jaws, Nigel Kneale,  Second Coming, Phillip Saville, The Comic Strip Presents, Adverts, War Horse, Pluto, The end of record shops and much much more! Available now from Amazon in print or Kindle ebook format.  Buy The Best of This Way Up Vol One