It’s amazing to think three decades have passed since Absolute Beginners was first released yet I’d never seen it till now. This despite the soaring title song being one of my favourite David Bowie singles. My knowledge of the film has been wholly rooted in the promo video for that Bowie single to the point where I was half expecting the man himself to be wandering around London at night as proceedings open. More than that though the way the video is edited suggested a look that, obviously, is different when it comes to watching the film itself. Then there’s the bad reputation Julian Temple’s movie had had over those decades being panned and flopping having cost over £8m to make and earning only £1.8m. It’s reputation sank so low that it’s been unavailable to buy for years.  Now though it is back in a 30th anniversary edition so time for me to reconcile those fleeting clips slotted into Bowie’s promo with the full film itself. Will I absolutely love it or will I lay down the hard lines? 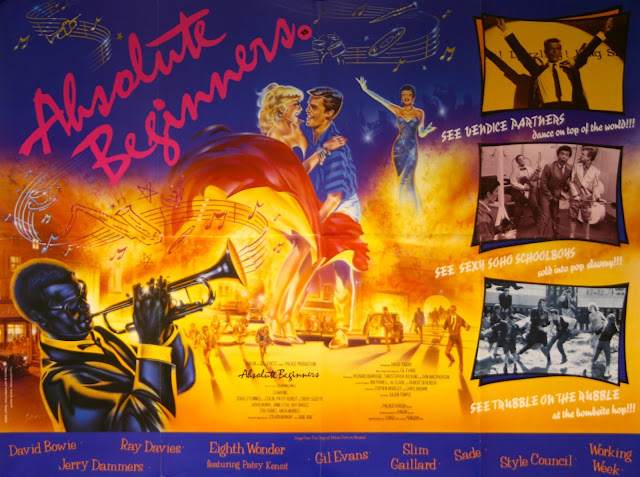 Part of the problem was the way Absolute Beginners was built up at the time as part of some sort of revival of the British film industry. In the accompanying documentary on this re-release one of the producers admits they deliberately allowed if not fanned the hype thus creating expectations which the film could never meet. Yet the weaknesses it has owe far more to the sleight narrative which seems unable to engage with what is initially presented as an intriguing cultural and social melting pot and some peculiar editing choices that suck a lot of the life out.


A dazzling opening sequence which appears to be one long Steadicam shot introduces us to a vibrant part of London finally escaping from the grey post war years into something more promising. It’s 1958 and the concept of the teenager is being born in the streets of the capital. We’re taken round a set packed with pastel colours and neon lit activity- it is a stylised Soho yet visually spot on in evoking the excitement of the city. Our narrator, an amateur photographer, introduces us to an array of interesting sounding characters, each of whom could have enough mileage for a story for a story of their own. However this is the photographer’s story and while other characters have exotic names like Cool or Wizard, his name is, er, Colin which will turn out to be symbolic of one of the film’s main flaws. 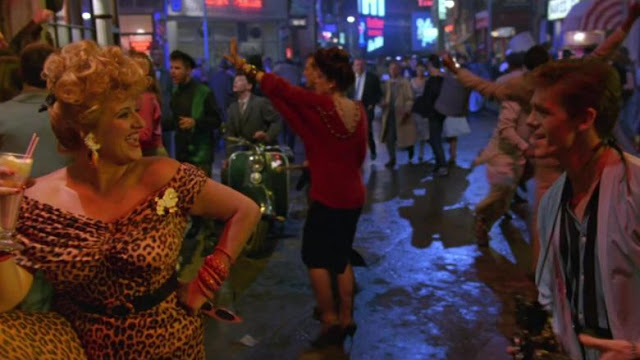 Somehow- and it seems unlikely from the start- his girlfriend is the rather more wonderfully monikered Crepe Suzette a model who is soon whisked from Colin’s side into a world of fashion shows and high society. She wants to `have it all` though seems to have neglected to mention this to Colin who is dumped in a sultry candle lit café number. Yet after a few moments brooding in the sunset he doesn’t seem that bothered; indeed there is a lack of passion about the two from the moment we meet them.


The unevenness of the narrative is already showing at this point especially as you wonder how genuinely Fifties some developments are. Suzette’s riotous sabotage of a posh catwalk show seems to be behaviour from the mid Sixties rather than the late fifties and some odd musical choices take us out of the decade.  Were miniskirts invented in the Fifties? What is a Style Council song doing on the soundtrack? Even Bowie’s imperial title song seems a tad out of place with its Eighties production though is only used on the opening and closing credits. Better are the jazz infused interludes in the Chez Nobody club and a couple of big production songs that sit between the old and new style of film musical.
There are also some salient vignettes showing how adults were soon working out how to best exploit the new `teenage` phenomena (there’s a 14 year old pop star called Baby Boom!) and misrepresent it to the mass public. However there is little structure to the script as we hop from one set piece to another while Colin’s rise to fame is even less convincing than Suzette’s. Julien Temple’s background in pop videos mean the results never look less than impressive yet there is little dramatic heft behind proceedings for much of the running time.  While Temple creates vivid moving tableaux and successful nods to the colour and vibrancy of old MGM musicals whenever the film has to home in on actual story it falters. He says in the documentary that the material was drawn from his own formative years so perhaps he was too emotionally close to not recognise its dramatic flaws? There are also editing issues with some odd jumps suggesting the running time was cut; Temple spoke last year about the film ending up with three editors for the different portions of the film and this really does show. 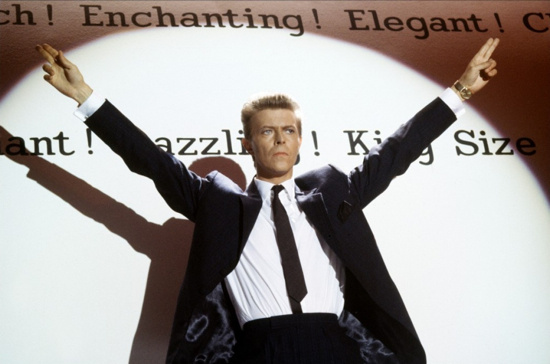 Suffering most are the two supposedly main characters who are given very little focus, particularly Suzette who vanishes for a while mid way and only turns up at the end to look upset and run about. Patsy kensit doesn’t really get much opportunity to act and when she does has to deliver some appalling dialogue. Eddie O’Connell fares better though Colin is not a partcicualrly well drawn character and seems a little clean cut to be living in such an area. The couple’s lengthy separation is never given enough attention; can you imagine if Romeo went off and did something else rather than remain obsessed with Juliet, it’s a bit like that.
The film is elevated by some juicy cameos, not least David Bowie who lifts the standard despite an odd accent. His showpiece song `That’s Motivation` sees him straddling a giant typewriter and eventually the world but he does it with such panache that you wish there was more of him. Likewise Ray Davies whose even shorter appearance includes a whimsical song called `Quiet Life` staged in a cutaway house and one dialogue scene as Colin’s father which is filled with promise about generational attitudes.  Even the unexpected likes of Lionel Blair and Alan Freeman make the most of their brief appearances.


Its’ a surprise when the final twenty minutes darkens the mood considerably abandoning the frippery to show the racial tensions in the area while brewing up a choreographic storm. A West Side Story inspired sequence depicts the potentially awkward scenario of racial violence in a perfect balance of movement and drama. The film finally shows some metal, framing this nastiness and brutality with enough force to put across particularly in some close up action. Even this section however cannot quite bring anything approaching reality from its leading couple who remain for the most part fleeing victims of the carnage.
Somewhere in here is a great film struggling to get out. The travails of Colin and Suzette seem to be in the way of that and if you are after a film that really does capture something of the early teenage pop boom then the excellent Telstar is the one. Absolute Beginners is a bold try let down by a narrative that doesn’t properly engage us with its central couple or connect with what was in every respect an incendiary moment in social history.


Had the film matched the video for David Bowie’s song things might have been different. Also directed by Julien Temple, the eight minute clip is inspired by a Fifties advert for Strand cigarettes and their slogan “You’re never alone with a Strand” which Bowie’s character references in the film. The song’s musicians include Rick Wakeman who was also on `Space Oddity and tracks on the `Hunky Dory` album though his piano runs were added much later. The co-vocalist on the chorus is Janet Armstrong who was herself an absolute beginner, this being her first major session. While produced by Clive Langer and Alan Winstanley who did all the music from the film, they have admitted there was little work to do on Bowie’s demo. 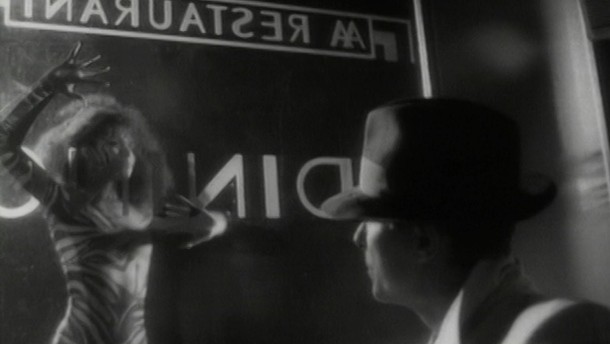 The video’s purpose is to promote the film but it does so subtly, adding glimpses and heavily edited brief clips. Yet the main focus is Bowie himself as he becomes increasingly beguiled by a woman dressed in a leonine leotard whose touch leaves a colour wash on any surface. The video ends by the river as this mysterious spirit vanishes under the water. This remains the only single I ever bought a 12 inch version of because unlike most such things in the Eighties, the additional running time was used for a different introduction. I2 inch singles normally consisted simply of repetition of the song itself. What I didn’t realise till I saw the film is that this introduction incorporates parts of `That’s Motivation`, the song Bowie performs in the film.

The Best of This Way Up Volume One includes features and reviews on The Ghosts of Motley Hall, Watch with Mother, The Feathered Serpent, Sky, Tom Grattan’s War, Richard Carpenter, Strange, Firefly, Out of this World, Handmade Films, Jaws, Nigel Kneale,  Second Coming, Phillip Saville, The Comic Strip Presents, Adverts, War Horse, Pluto, The end of record shops and much much more! Available now from Amazon in print or Kindle ebook format.
Tomorrow Is Now - The Best of This Way Up Vol 1