Words: Chris Arnsby
Mike Read: "Good evening. Welcome to Top of the Pops. On the programme tonight Phil Collins, The Who, Motorhead, and Adam and the Ants. And spinning like an apple just outside the top forty Duran Duran." 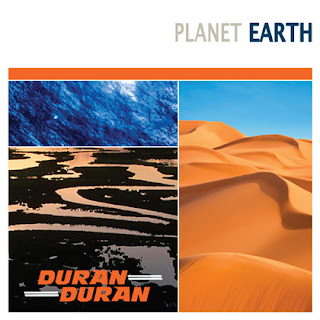 Duran Duran: Planet Earth [47]. Duran Duran's performance is augmented by a model of the Earth, brought along from the BBC Visual Effects Department by Mike Kelt who gets a Visual Effects credit for the second week in a row. It's a nice model of the Earth, although there's a nasty scratch running across the Bay of Bengal. So where's the model from? I'm pretty sure it's not from Blake's 7 or The Hitch-Hikers Guide To The Galaxy so I'm going to stick my neck out and guess The Comet is Coming! BBC2's odd tribute to Halley's Comet broadcast in May 1981.

Talking Heads: Once In A Lifetime [14]. David Byrne's Jazzercise workout video. It's the most exhausting thing I've seen on Top of the Pops since Coast To Coast's performance of (Do) The Hucklebuck. 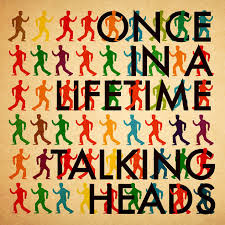 Adam & The Ants: Kings Of The Wild Frontier [6]. A repeat from the 19/02/1981 edition, but that was presented by D*v* L** Tr*v*s so it went unseen on BBC4. Adam & The Ants are surrounded by the audience on all sides; and sensibly the audience are all made to stand so no one is lounging or looking bored. Every possible camera angle has a backdrop of dancing teenagers, and the result is a classic Top of the Pops performance.
Toyah: It's a Mystery [16]. Toyah is also repeated from the 19/02/1981 edition. Unusually we cut directly from one repeat performance to the other with just a voice-over from Mike Read instead of the standard in-vision link. Toyah's performance starts with a giant close-up of her eye, and as the camera pulls out the lens seems to have been smeared with vaseline to soften the image. The colour levels have also been boosted and the resulting picture has a very odd ethereal quality. 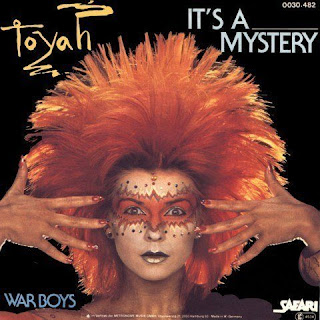 Shakin' Stevens: This Ole House [29]. We have reached peak Shakey. He's dancing away in the audience pit like Adam & the Ants, but this time the audience is seated. To stop them looking bored they have been given a basic routine to follow; wave arms left, wave arms right, wave arms up, pat your knees. Watch out for the bored proto-Goth directly behind Shakey. She hasn't come here to have fun. Still even she can't resist the full blast of Shakin' Steven's performance and by halfway through she's giggling with her friend. It probably helps that she's also seated next to the most enthusiastic person in the audience; a bloke wearing an odd black top with a white diagonal flash which looks like it fell out of the Blake's 7 dressing up box. Leg's & Co have also been stuck in the audience and are dancing away, check out the second bored proto-Goth stuck between Lulu and, err, Lulu. She's far enough away from Shakey that she never warms up, and at the end her glower can be seen from the other side of the studio.
Headgirl (Motorhead & Girlschool): Please Don’t Touch [5]. A third repeat from the 19/02/1981 show. That was a great edition, look at the line up; The Teardrop Explodes: Reward; Rainbow: I Surrender; Fred Wedlock: The Oldest Swinger In Town; Headgirl (Motorhead & Girlschool): Please Don’t Touch; Toyah: It’s A Mystery; Stray Cats: Rock This Town; Talking Heads: Once In A Lifetime; Visage: Fade To Grey; Adam & The Ants: Kings Of The Wild Frontier; Joe Dolce Music Theatre: Shaddap You Face. It's only really Rainbow who disappoint. Tonight's edition has that one beat, not a duff performance so far but wait...
Phil Collins: I Missed Again [45]. The open pot of paint is back. This time it's on a grand piano. Unfortunately the paint has also brought Phil Collins along. Can't the pot of paint ditch that loser and team up with someone more charismatic?
Kool & The Gang: Jones Vs Jones [31]. Legs & Co dance to Kool & The Gang's tribute to divorce. Half the troupe are dressed as brides (sexy brides obviously, this is Legs & Co we're talking about) while the other half are done up as grooms (sexy grooms obviously, etc,etc). Right at the back of shot a couple of skinheads lark around, at one point they seem to start mock slow dancing together before breaking up in laughter. Obviously they are less than impressed by Flick Colby's interpretation of the song.
The Teardrop Explodes: Reward [25]. Julian Cope looks remarkably like Ace Rimmer with his leather jacket and floppy gurly hair. The Teardrop Explodes have filmed this promo in what popular consensus  thinks is the pre-renovation Albert Dock complex in Liverpool; although a minority of people think they are over the river in Birkenhead. If only there was some way to answer this vexing question. 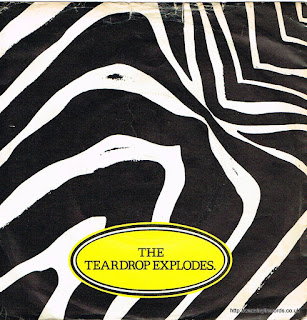 The Who: You Better You Bet [35]. The Who graciously come into the Top of the Pops studio to play their latest single. A few people bop up and down but the majority of the audience just gaze bored at the dinosaurs.
Top Ten Countdown: This week there's a spinning Top Ten logo in the Top of the Pops font, but it disappears halfway in the transition from 7 to 6. This is the point where the editor drops in a clip from the earlier performance of Kings of the Wild Frontier. The editing process must have somehow broken the spinning logo effect. There's also a number which slides across the screen from left to right to show the chart position.
Number One: Joe Dolce Music Theatre, Shaddap You Face. Joe Dolce can't make it in to the studio again so a repeat of his 05/02/1981 performance is recycled.
Closing Titles: Last week the closing titles played out over Joe Dolce, and Peter Powell said goodbye before even starting the Top Ten countdown. Michael Hurll obviously feels that doesn't provide a satisfactory end to the programme, so this week he experiments with a return to the days of the Top of the Pops disco. We close with the audience, and Mike Read, dancing with different degrees of enthusiasm to (Do) The Hucklebuck by Coast To Coast [7].
Performance of the week: Shakin' Stevens: This Ole House, although it was a close run choice between this or Planet Earth.