Richard Skinner: "You're right it's Top of the Pops. And, some great music tonight. We've got The Pretenders to start the show with a Message Of Love. YES!"


Pretenders: Message of Love [28]. Poor Richard Skinner gets lost in a crowd of waving and overexcited teenagers. As the camera crash zooms on his startled face he's forced to start leaping to stay in shot, which might explain why his final "YES" registers a six on the Peter Powell scale. What happens next is unclear because we cut to another camera but it looks as if Richard Skinner looses his balance and takes a tumble, bringing a couple of audience members down with him. Hilary West is on Vision Mixing duties tonight and decides to go old school at one point with a colour replacing effect that was big in the 1970s. 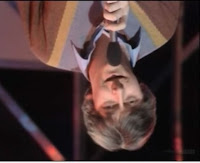 Ultravox: Vienna [2]. Richard Skinner's next link is accompanied by a low angled shot which makes it look like he's retreated up to escape from the audience. Who's that at number 2? Why it's Midge Ure and the boys from Ultravox. Remember, 2 comes right after 1. I think this is the first Top of the Pops outing for the video. The fake widescreen bits which bookend this video were designed for 4:3 ratio televisions, so they now look weird when played back on genuine widescreen TVs.

Barbara Jones: Just When I Needed You Most [31]. Back in the crazy days of 2014 I was fairly rude about this song by Randy Vanwarmer. "Walter the Softy whines about being dumped by his girlfriend. Sensible girl." This is still a lousy, passive aggressive song -"you left me because you were miserable, why didn't you stop to consider my feelings?"- but at least putting it to a reggae beat has given it a spark of life.


Coast To Coast: (Do) The Hucklebuck. [39]. The lead singer of Coast To Coast looks remarkably like the Fast Show's Charlie Higson. The result is I keep expecting the stage to be invaded by Mikki Disco. Scorchio!


Gillian: Mutually Assured Destruction [32]. After the power-chords introduction it's a bit of a surprise when the lead singer of Gillian starts singing in a quavering falsetto. "From where I stand/I see a blind man on a hill." Things become a bit more generic after that for a song which manages to be both bog standard rawk and a sincere if gloomy plea for nuclear disarmament; "From where I stand/I can watch the bleeding children cry." Cheer up mate. It may never happen. (Ed; Ha ha, he's called Gillan of course fact checkers)


George Benson: What's On Your Mind [50]. The Gillian caption runs over a freeze frame of the band at the end of the performance. This has been done in the past when a performance is repeated from an old edition to avoid showing the wrong presenter, but that's not the case here. Something must have happened to make the footage unusable. For the George Benson number Legs & Co dance in front of a smoky backdrop.


Freeez: Southern Freeez [34]. You've got to admire the disinterested way the lead singer tosses her lines out over the audience. I haven't seen this level of studied indifference since the glory days of The Stranglers.


Beggar & Co: (Somebody) Help Me Out [53]. There appear to be about fifty people dancing on stage in the long shots across the studio; and they're all dancing their own way.  It's glorious chaos of the kind not seen since the last time the promo film for Earth, Wind & Fire's Boogie Wonderland was played. 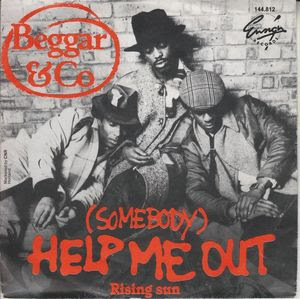 Kelly Marie: Hot Love [54]. Spike Milligan used to describe a dance called The Cocking Of The Legs. "The man assumes the position for a Highland Reel, and then at the sound of 2/4 or 6/8 tempo he raises his right leg and leaps all over the room with one hand up in the air and one on his hip. We played 'Highland Laddie'; at once the floor became a mass of leaping twits all yelling 'Och! Aye!'" I'll bet that's what discos looked like when this Kelly Marie song was played.


Top Ten Countdown: This week Richard Skinner says goodnight before launching into the top ten. This week the captions shoot in from the right hand side of the screen and stop in the middle; exciting.


Number one: John Lennon, Woman. A second time out for the less contentious Top of the Pops version of the promo film. The closing credits play over the top of the film and The Maggie Stredder Singers are back, credited with Vocal Backing. I wonder where they contributed?


Performance of the week: Beggar & Co: (Somebody) Help Me Out


Peter Powell: "Hello! And welcome to another edition of Top of the Pops! You're very welcome to watch along with Ultravox and Roxy Music, and Madness! Also Quo who open up the show and who better! Something that I like about you baby! Here's Status Quo.


Status Quo: Something ‘Bout You Baby I Like [19]. A reliable if uninspired way to start the show. Status Quo are... well it's all in the name really. Down at the front of the stage a couple of blokes headbang away. I guess they are having fun.


Roxy Music: Jealous Guy [6]. Brian Ferry is looking very sweaty and twitchy in this promo film for Roxy Music's tribute to John Lennon. He will insist on pulling "sexy" faces as he sweats and squints at the camera. Form an orderly queue ladies. For the exit.


Kim Wilde: Kids In America [43]. Fortunately for Brion Ferry, Kim Wilde is here to give a master class in smouldering for the camera. Speaking of cameras, the picture gives a particularly nasty lurch as the camera zooms out at the start of the first chorus. Some poor audience member has just been clonked on the head. 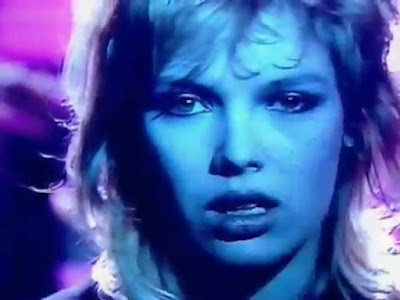 
Madness: The Return Of The Los Palmos 7 [7]. Madness almost get lost in the crowd surrounding the stage. Suggs and Chas Smash are standing on the raised podium but the audience press in so tightly around the sides that the pair seem to rise up out of the crowd as if they were on stilts; perhaps they were. That would be an appropriately nutty thing to do. At one point one of the guitarists mouths something at the camera. I don't think he says anything more dangerous than "oi" but when he does it again the result is a quick fade to another camera and no more close-ups for that man.


Kelly Marie: Hot Love [31]. This song's got such a weedy chorus. Everything's there for this to be another infectious disco track like Feels Like I'm In Love, but as soon as the chorus starts all the energy drains away. Check out how much better Feels Like I'm In Love is on Youtube. Watch the promo film Top of the Pops never showed in which Kelly and the boys dance round London while bemused onlookers stand at the edge of shot and wonder what's happening.


Ultravox: Vienna [2]. Stalled at number two, what record could possibly be stopping this song from getting up to number one? This is another airing for the video because Midge Ure can't face coming into the studio for fear of bumping into Joe Dolce.


Kiki Dee: Star [40]. What to do? Top of the Pops has built an enormous pillar with the letters K-I-K-I-D-E-E spelled out in light bulbs. All that money spent and it's going to waste because Status Quo won't have the thing on stage. Luckily Kiki Dee has released a single so Michael Hurll's folly can be put to good use. Weirdly I have a very strong memory of this performance. I've got no idea why, except that I must have been fascinated by the Kiki Dee Lightbulb Tower. Towards the end of the song there's a key change, and at the same time the studio lights change so that a spotlight shines on Kiki Dee. Just as this happens a man in a green shirt sticks his head out from under the scaffolding at stage left. He looks a little worried. Is he checking to see if some of the bulbs have blown?


Top Ten Countdown: No multi-coloured Top Ten caption again. Has it gone for good? All we get is a spinning TEN or NINE to indicate the chart position. BBC Boffins have now worked out how to make this word spin and change colour at the same time. Next year the Sinclair ZX Spectrum will be released.
Number One: Joe Dolce Music Theatre, Shaddap You Face. Joe Dolce can't make it in to the studio so here's the video for  Shaddap You Face. As the closing credits roll Michael Kelt is credited for Visual Effects. I wonder if he built the Kiki Dee light tower. Could he have been the worried man in green?


Performance of the week: Kim Wilde: Kids In America.