A few notes on the Hunger Games finale. Missed this at the cinema so pleased to catch up finally having enjoyed the first three films. My overall impression though was that the finale would have been better as one film rather than being dragged out to two. The result of doing that means the second half of the story feels like another franchise altogether. Admittedly Hunger Games was never a laugh fest but the contrast between the gluttonous selfish Capital and the grey careworn districts made for compelling opposites. Yet the colour drains from Mockingjay the longer it goes on and this becomes wearing after a while. Part one lingered too long in limbo, seemingly underscoring the same points again and again. I’ve not read the books so perhaps this plays out better on the page than it does on screen. So Part 2 surprisingly continues in the same vein; the heroic poster advertising the movie is as much a misdirection as all of the news feeds from the Capital we see in the film. Maybe that’s the point. 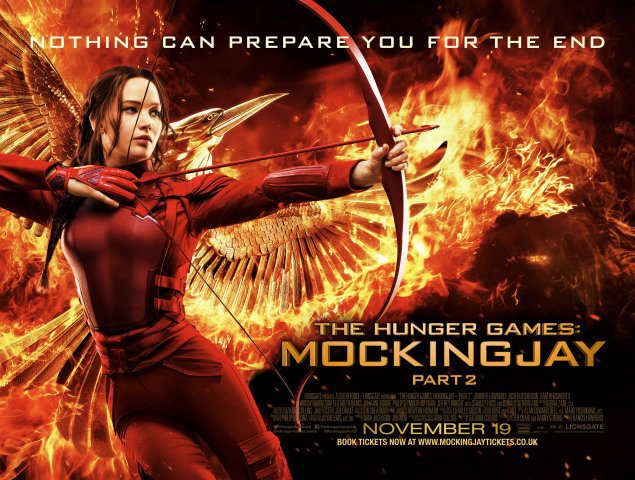 It is a more compelling film than part 1 though. Because we are at the story’s end there is a desperate weariness to our protagonists’ journey from the war torn districts into the Capital. It’s weird that the hitherto invincible regime of President Snow appears to crumble so easily allowing Katniss and co into the centre with little effort. It’s when they get there though that the troubles start. There’s a darker attempt to echo those Hunger Games which, while never kind, at least seemed to give competitors a chance. Here, in one of the film’s standout sequences horrible black oil pours into a space between sealed buildings and a character is hoisted and gutted in mid air by some nasty metal traps. Elsewhere we meet `mutts`, who are supercharged Gollums with big teeth. There’s a mesmerising action scene in which our heroes are decimated by these monsters. Its about as far from superhero slugouts as you’re liable to get in a major film.
The story’s central point has always seemed to be the manipulation of the masses by media whether for competitive thrills or political advantage and these themes carry through effectively in this film. The added layer is Katniss’ growing realisation that she cannot win by bold speeches alone and needs to indulge in a little subterfuge of her own. After all she- and we-realise that Katniss is used like a weapon and could easily be abandoned once her usefulness is over. Bleached out and listless Katniss is really not inspirational character propaganda has turned her into but it is her relationship with the post brainwashed Peeta that gives the story an emotional core. If you’ve watched the first two films you’ll find this –and several other incidents- heartbreaking. The fact that Jennifer Lawrence delivers a performance as if she is in a serious art picture helps give these things a real truth. Josh Hutcherson too, often the overlooked actor in Lawrence’s shadow does a great job pouring out Peeta’s bitter confusion.  I have to mention Donald Sutherland as well, purringly brutal in his big beard right to the (surprising) end.
The film does have a happy ending but it is earned, surely, by the characters that make it to that end, not necessarily the ones you expect. If I’ve seemed a little harsh it’s because The Hunger Games is that rare best- an intelligent `big` movie with something to say but three rather than four films would have been ample time to tell it’s intriguing study of oppression, rebellion and courage.
Posted by John Connors at 23:03