There have been lots of versions of the perennial Peter Pan story but few have really improved on the original book perhaps because it’s a tale that now feels old fashioned espousing another time. This 2015 tv movie tries to root the story in the present day centring on a girl called Lucy Rose whose recurring heart condition has brought her into Great Ormand Street hospital for a vital operation. This is, of course, the same hospital to which Barrie left the royalties from the book and it entrance has a bronze statue of him. Thus she is aware of the Peter Pan story from the start. Adrian Hodges’ adaptation leans heavily on the power of storytelling over children as Lucy reads the classic text to other young patients. As her own condition worsens and she is rushed into the operating theatre, the events of the book play out in her head using people we have already seen as the characters. 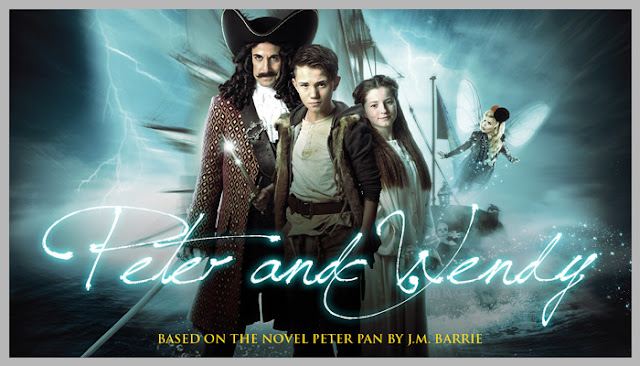 So as she becomes Wendy, her fellow patients become the lost boys and kindly surgeon Dr Wylie is transformed into villainous Captain Hook with his medical students becoming the other pirates. Her own mother becomes Wendy’s fictional parent. Its not a new idea but nonetheless pushes the cast into entertaining performances though it’s visually that the production benefits the most from the idea as the two scenarios start to mould together. This is best realised in an island made of hospital beds were Pan fights Hook and in a final confrontation in full costume in the ward where Rose and the kids have been treated.


There are weaknesses though- it’s hard to see why Lucy would visualise Wylie as Hook when in real life he seems unduly caring and she’s encouraging her mother to ask him for a date. Also there is no real life parallel for Peter which stands out because everyone else has one. Maybe this symbolises Peter being the boy who never grew up and therefore would have no such equivalent or perhaps it reflects him being just a fictional character whom Lucy latches on to. Yet Hodges suggests a vague romantic attraction between Peter and Rose/ Wendy which you assume will play out at the end in school or something but it never does.


Stronger is this interpretation of Hook, an often over played role, but one which Stanley Tucci captures perfectly. His Hook is a former public schoolboy prone to self pity and also acts of sudden violence. He makes awful jokes which his band of henchmen (including the ever funny Rasmus Hardiker as Smee) feel forced to laugh at. The actor really catches the character as you feel he should be played. The kids are well drawn too- Lucy balances modern and traditional; Hazel Doupe refrains from making her the archetypal moody teen, instead both she and her mother (Laura Fraser, excellent) are trying to hide their worries from each other. Peter is imagined as a Northern lad with access to Neverland’s secret supply of hair product and Zak Sutcliffe is always convincing. Paloma Faith is on hand as a bolshy Tinkerbell with (necessary) subtitles. 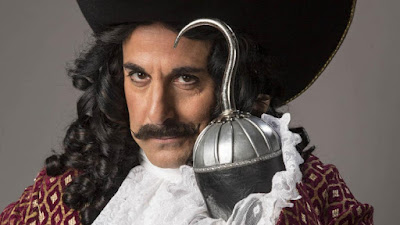 When this was first broadcast over Christmas on ITV it was in an evening slot and there are moments of violence that would be unsuitable for younger children. Some of Tinekerbell’s words are replaced by stars on the sub titles for good reason too! There’s also an unexpectedly sad moment near the end which seems to have come out of the blue and rather goes against the grain of the messages we’ve seen.
Being a TV movie there is a certain scaling down of matters, most noticeably in Neverland which compares frugally with the recent big screen Pan-orama. Yet this brings some ingenuity – the secret hideout underneath a tree is an idea any child would like. There is a certain drift during the middle all concerned bring the production to a climax with inventive action and with emphasis on the resourcefulness of Peter and bravery of the kids. In that respect Peter and Wendy is respectful of the source material while being inventive it its interpretation.
Posted by John Connors at 22:49