Top of the Pops double edition!!

15/11/79
Kid Jensen,"Hello there! And welcome . This week as we look at the chart we listen to Dynasty with I Don't Want To Be A Freak."
Chart music: Dynasty, I Don’t Want To Be A Freak (But I Can’t Help Myself) [26]
The Jam: The Eton Rifles [4]. Still brilliant. This week The Jam make do without the Four Silly Asses. There's a nice camera move at the end of the performance with a pull back across the studio from The Jam to Kid Jensen who launches into his introduction to the next song while the camera pans around him; unfortunately the next song turns out to be... 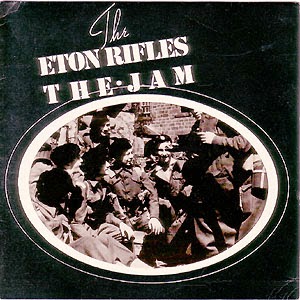 Cliff Richard: Hot Shot [46]. Ecch! Someone's put Cliff Richard's on a podium and angled the camera up at him. The resulting groin-level shot is horrific as Cliff stands hands-on-hips swaying like someone doing a bad Cliff Richard impression. And what's he wearing? A brown shirt, a brown tie, brown trousers and brown shoes. Even his skin is a leathery shade of brown. Weirdest of all are the camera shots which reveal the entire studio audience exiled behind the scenery and sitting on the ground. Were they all put on the naughty step for flicking the V's at the future Sir Cliff? "I'm having fun," sings Cliff Richard at one point which is more than can be said for anyone else.


Donna Summer & Barbara Streisand: No More Tears (Enough Is Enough) [14]. "It's raining, it's pouring..." go the opening lines of the song. Disappointingly the next words out of  Barbara Streisand's mouth are not "the old man is snoring". Neither Donna Summer or Barbara Streisand are in the Top of the Pops studio so Legs & Co frolic in their place.
Thin Lizzy: Sarah [27]. A repeat from the 01/11/14 Mike Read edition.
The Tourists:  I Only Want To Be With You [43]. A straightforward cover of the Dusty Springfield song. Odd to see someone as determinedly individual as Anne Lennox involved in such a bog-standard copy of someone else's work.
B. A. Robertson: Knocked It Off [15]. Rubbish
Suzi Quatro:  She’s In Love With You [11]. A second repeat from the Mike Read edition a couple of weeks ago. In fact tonight's show is heavy on repeated songs; The Jam, Thin Lizzy, B. A. Robertson, Suzi Quatro, and The Ramblers. It would have been less noticeable in 1979 because there was a skipped J*mmy S*v*l* edition sandwiched between Mike Read and Kid Jensen.
The Moody Blues: Nights In White Satin [41]. "The third time of issue," according to Kid Jensen. Why not try writing a new song Justin Hayward? Lighting director John Farr indulges his artistic side. Everything is lit blue, with white lights picking out individual members of the band. Do you see what he did there?
Kool & The Gang: Ladies Night [16]. A murky NTSC video recorded at the Soap Factory Disco in Palisades Park, New Jersey. The heads of three ladies emerge from a sea of dry ice at the front of the stage. 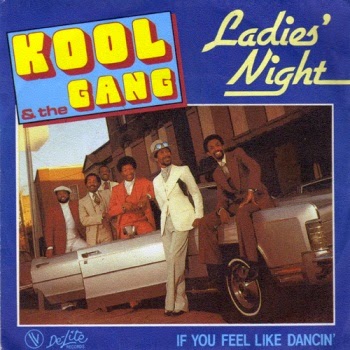 Secret Affair: Let Your Heart Dance [38]. Secret Affair last appeared on another Kid Jensen presented edition of Top of the Pops. He must be championing the band behind the scenes. Good for him.
The Ramblers: The Sparrow [13]. The backing singers are all over the place. They only have to sway left and right, and they can't even manage that properly. Kids are getting out of time and bumping into each other. Frankly it's a mess. Someone buy the group a metronome, and don't let them leave the studio until they've done it properly. (John fact- This song was written and produced by Brian and Michael of Matchstalk Men `fame`. They also wrote a song for Ken Dodd. They have no mercy.)
Showaddywaddy:  A Night At Daddy Gee’s [48]. Showaddywaddy are dressed up in all their finery and they seem more colourful than normal. Maybe the lighting is different, or they've all changed their washing powder but the colours on their coats seems more lurid. Vision Mixer Carol Abbott keeps playing with the Quantel's freeze function. In 1979 this looked suitably amazing; now I keep thinking my hard disc recorder has crashed.
Number 1: Dr. Hook, When You're In Love With A Beautiful Woman. "When you're in love with a beautiful woman it's hard". No more viagra for the lead singer of Dr. Hook.
Closing titles: The Isley Brothers, It’s A Disco Night (Rock Don’t Stop) [24] Performance of the week. Secret Affair: Let Your Heart Dance.

29/11/79
Peter Powell, "Hi! And welcome to the music and the action for this week's Top of the Pops!"
What Peter Powell isn't telling is the reason why he is appearing in sound only. The BBC's on strike again; the same strike which knocked out the Doctor Who story Shada. Top of the Pops has been reduced to a show compiled from old clips and promo videos by a demarcation dispute over who takes responsibility for switching on the Play School clock; apparently this depends on whether it's classed as a prop or a special effect. Last week's show was affected by the same strike, but that was presented by D*v* L** Tr*v*s so it's gone unrepeated.
Chart music: Michael Jackson, Off The Wall [25]. For some reason the top thirty band pictures are all black and white. Presumably someone in the BBC Graphics department was showing sympathy for the strikers by refusing to work in colour.
The Gibson Brothers: Que Sera Mi Vida (If You Should Go) [12]. Peter Powell's links sound very flat. Obviously it's difficult to work up the same enthusiasm without the studio atmosphere but I wonder if there was an issue with the sound recording as well? The band's name is captioned on screen at the start and end of each performance, is it possible there was some doubt about whether it would be possible to record even the audio links? Meanwhile The Gibson Brothers video is a visual nightmare. Everyone's wearing neon and leaping around the studio. Also, a hideous flickering wipe is used to transition between shots which is very bad for the eyes. 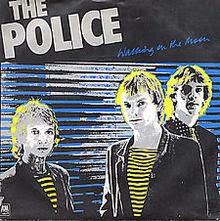 The Police:  Walking On The Moon [5]. NASA porn. Sting and the lads are on location at the Kennedy Space Centre and clowning around in front of various pieces of space hardware. At one point Stewart Copeland is allowed to start drumming on the nozzle of one of the Saturn V's giant F-1 engines; he's probably not going to damage it but somehow this seems oddly disrespectful. Pop fact, none of the NASA stock footage used for this song shows any astronauts actually walking on the moon. (John fact- None of The Police were ever actually on the Moon.)
The Tourists: I Only Want To Be With You [22]. A repeat from the Kid Jensen 15/11/79 edition.
Status Quo: Living On An Island [36]. All Status Quo official promo films feature the band rockin' out in a warehouse cunningly disguised to look like a concert stage. Living On An Island is no exception exception however a bored editor has spliced in some nice footage of penguins.
Blondie: Union City Blue [21]. More terrible sound quality, the cymbals sound weirdly hissy and at some points are so loud they almost overwhelm the rest of the song.
Thin Lizzy: Sarah [24]. A repeat from the Mike Read presented show on 1/11/79.
Rose Royce: Is It Love You're After [34]. Rose Royce have a go at covering Theme from S-Express by S-Express but after getting the first few bars spot on they give up and start playing something else.
The Moody Blues: Nights In White Satin [23]. A second repeat from the Kid Jensen 15/11/79 edition.
The Skids: Working For The Yankee Dollar [32]. A conceptual mess of a video. A compromise brought about because everyone wanted something different so all they lumped all the ideas together. One member of the band wanted a first world war trench set, another wanted some sexy women, and Richard Jobson wanted to have lights stuck to him.
Donna Summer & Barbara Streisand: No More Tears (Enough Is Enough) [3] . A third repeat from the Kid Jensen show. Having quickly checked last week's  D*v* L** Tr*v*s show, it's out there online, it looks as if Legs & Co were sent to Ealing to film their performance for Herb Alpert's Rise. That can't have been an option this week.
Pink Floyd: Another Brick In The Wall (Part 2) [26]. That fantastic opening pan across the London skyline was filmed from the top of Turnpike House, a giant block of flats next to King's Square Gardens, Islington. Why not go into Google Earth and have a look at how the view has changed in the intervening decades.


Number 1: Dr. Hook, When You're In Love With A Beautiful Woman. Captain Peacock: "A glass of water please for Mr. Humphries...and a tranquillizer for Mr. Lucas".
Closing titles: The Isley Brothers, It’s A Disco Night (Rock Don’t Stop) [14]. Performance of the week. Thanks to this strike hit show I can abandon my obsessive adherence to the studio-performance-only rule and go for Pink Floyd: Another Brick In The Wall (Part 2).