Guest Post: Oliver Wake
Sixty years ago this week, Britain experienced one of its earliest major television drama controversies, when the BBC screened a dramatisation of George Orwell’s dystopian masterpiece 1984.* In view of this, and recent talk of at least one new film version of the novel in the works, now is a good time to look back at how 1984 has fared in its five television and film adaptations. 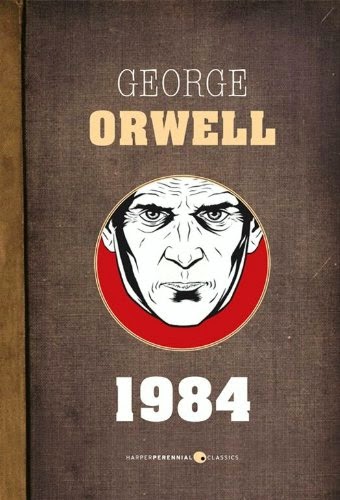 Perhaps surprisingly, America made the first screen version of the novel, with the CBS network bringing it to television in 1953. Coming at a time of heightened anti-communist fervour, Orwell’s warning against the most extreme forms of Socialism must have appealed to television executives, but in translation to the small screen it lost most of its political dimension. Running to only 50 minutes, the live television play is more of a distilled essence of the novel than a true dramatisation.
Given the conservative nature of 1950s America, it’s unsurprising to find that William Templeton’s script downplays all the seedy and horrific elements of Orwell’s vision. The torture scenes are cursory and the interior of Room 101 remains unseen, its infamous rats reduced to mere menacing noises off. All references to sex are eliminated (ironically, the ‘anti-sex league’ becomes the ‘anti-love league’), and the word ‘Socialism’ is conspicuous only in its absence. Lacking a vocalisation of Winston’s realisation that he loves Big Brother, even Orwell’s final confirmation of Winston’s defeat is effectively omitted, softening the conclusion significantly.
The BBC were next to take on Orwell’s novel, in December 1954. On the strength of their science fiction serial The Quatermass Experiment, which had thrilled and terrified the viewing audience, 1984 was allocated to the team of dramatist Nigel Kneale and producer/director Rudolph Cartier, ensuring an uncompromising approach. Indeed, their television production included all the horror and sordidness that its 1954 audience could tolerate, and more besides. It became an overnight media sensation and cause celebre after provoking unprecedented complaints.
Although again a live broadcast, it was given all the resources of the (admittedly still primitive) BBC Television service and a generous two-hour duration, resulting in a significantly more impressive production than the CBS version. With an excellent cast that included Peter Cushing as Winston and Yvonne Mitchell as Julia, and a script that pulled few punches in its depictions of torture and the privations of Orwell’s ‘Airstrip One’, this 1984 was both compelling and faithful to its source.
It’s also worth noting that it was this production more than anything else that brought Orwell, the novel 1984 and its terminology (Big Brother, ‘thought police’, etc) to the British public’s attention. Although it may be fanciful, one contemporary newspaper report quoted 1984’s publisher claiming 20,000 extra sales of the novel in the week following the broadcast. 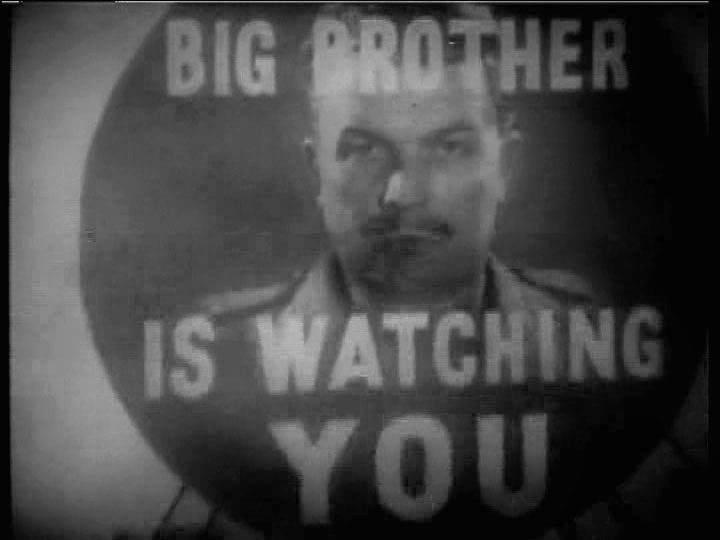 Little more than a year later, the first film version of 1984 arrived, its box office no doubt boosted by the sensation of the BBC production. Director Michael Anderson’s film was labelled a ‘free’ adaptation, signposting that liberties with Orwell’s text were to be expected. With Templeton on the writing team (co-writing with Ralph Bettinson), it reused chunks of his CBS script and was again a much enfeebled version of the novel. The political dimension is largely missing (even the ‘Prole Sector’ becomes the less overtly political ‘Peoples Area’[sic]) and the essential torture scenes kept very light. The casting of the clearly robust Edmund O’Brien as Winston, a character Orwell described as a physically pathetic figure, was also unhelpful.
Interestingly, two names are changed for this production. O’Brien becomes O’Connor – a change of no obvious significance, making it odd that it was changed at all – and Goldstein is renamed Calledor. The CBS version had also renamed Goldstein, to Cassandra, and in neither case is it clear why, but it could have been to avoid the Jewish associations of the name (which were instead played up in the BBC 1954 version). The look of Big Brother himself, in his depiction on posters and screens, is also changed. Taking Stalin as its model, the novel described a figure with a dark moustache but here he is clean shaven and nondescript. This too was done by the CBS version, which had used a stylised painted face rather than a photographic image, and also the second BBC production.
Most unusual, however, was the way the film’s ending was re-written, but only for the British market. While the version distributed overseas concluded roughly in line with Orwell’s own fatalistic ending, Brits instead saw Winston and Julia suddenly break their conditioning, publicly decry Big Brother and be shot dead, each reaching out a hand to the other as they die. The decision to amend the ending just for the British audience may have been in reaction to the controversy over the BBC version. One of the main complaints – and the one conceded by the BBC – was that its conclusion had been entirely without hope. The new ending is hardly a happy one, but in showing Winston and Julia’s love for each other overcoming their conditioning, it does include a glimmer of optimism.
In fact, the ending filmed for foreign distribution also differs from the novel, but only slightly. Rather than his solitary realisation that he loves Big Brother, Winston instead joins in with a crowd enthusiastically chanting “long live Big Brother”. It’s a minor detail, but it could be argued that this indicates Winston succumbing to the herd instinct of conformity rather than experiencing a genuine feeling of love for Big Brother, which would be the greater defeat.
Intriguingly, the softening of their conclusions occurs to some extent in all the big screen adaptations of Orwell, his downbeat endings clearly not translating well to what is primarily an entertainment format. The animated Animal Farm of 1955 gained the beginnings of a new revolution against tyranny at its end, as does the 1999 live action/animatronic version. In 1997’s Keep the Aspidistra Flying, Gordon Comstock’s ultimate acceptance of family and domesticity is given a wholly more positive spin than the novel’s portrayal of it as a prison of conformity. 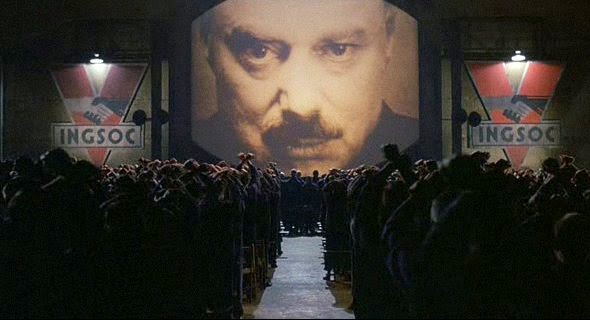 Kneale’s 1954 TV script was revived for a new BBC 1984 in 1965. Whereas the script itself underwent minor updating, these were largely cosmetic in nature, with the flexibility of pre-recording enabling Kneale to cut and rearrange scenes which had previously been arranged to accommodate the logistics of live transmission. However, its realisation reflected the passage of 11 years since its original production. For example, the torture of Winston uses almost-psychedelic lighting effects, making it look more like The Avengers than a prophesy from 1948, when Orwell wrote his novel.
Director Christopher Morahan also reduced the ages of Winston and Julia, casting youthful David Buck and Jane Merrow. He reasoned that, as it had not yet occurred in the real world of 1965, the atomic war that ushered in the regime of Big Brother must occur in the next few years. Given this, the characters had to be young enough in 1984 that they could not recall life before that time, which put them in their twenties, rather than their thirties as in the novel. It was the last time an adaptation of the novel could credibly locate Orwell’s nightmarish vision in the real-world future of its contemporary viewers.
Nearly twenty years passed before another version surfaced, with Michael Radford’s film in the year 1984 itself. No longer a futuristic tale, Radford chose to dramatise the novel as the 1940s vision that it was. Using many of the real locations of the book and embellishing little, there’s nothing in the film that Orwell himself would not have recognised. It benefits from a strong cast, with John Hurt’s Winston comparable to Cushing’s electrifying turn before him.
Radford later recalled a film distributor suggesting that he give his screenplay a happier ending than Orwell’s novel. In fact, the ending we get, while ostensibly as in the novel, also allows for a happier interpretation. Whereas Winston’s new love for Big Brother may be best vocalised as “I love Big Brother”, as in the BBC versions, here it becomes “I love you”, as he turns away from the image of Big Brother and towards the direction in which Julia has recently departed, leaving the object of his love ambiguous.
The film’s main weakness is simply that, in 1984 itself, its story could no longer shock and disturb – like the 1954 production had – as a prediction of the future. Any new film will face the same problem, and whether it can be addressed by shunting its story further into the future (2084, perhaps), or by more extreme adaptation, remains to be seen. It will be particularly interesting to see how they handle the novel’s ending and whether a film can be made that doesn’t dilute or replace it.

*For convenience, I’ll be referring to the novel and its adaptations as 1984, rather than Nineteen Eighty-Four as is more properly the name of the novel and some of the adaptations. When not it italics, 1984 refers to the year itself.