2014, available to buy. Written and directed by Stuart Murdoch / Starring Emily Browning, Olly Alexander, Hannah Murray
For about seven years while still fronting indie group Belle and Sebastian Stuart Murdoch was also nurturing an idea involving girl singers which evolved into this film released earlier in 2014. As such it is written as a labour of love that marks a directorial debut as well even though as he admits he has no experience in either field.  The result, while inevitably showing occasional flaws, is a surprisingly involving work. It takes a little too long to get started but once it does some charming moments ensue. 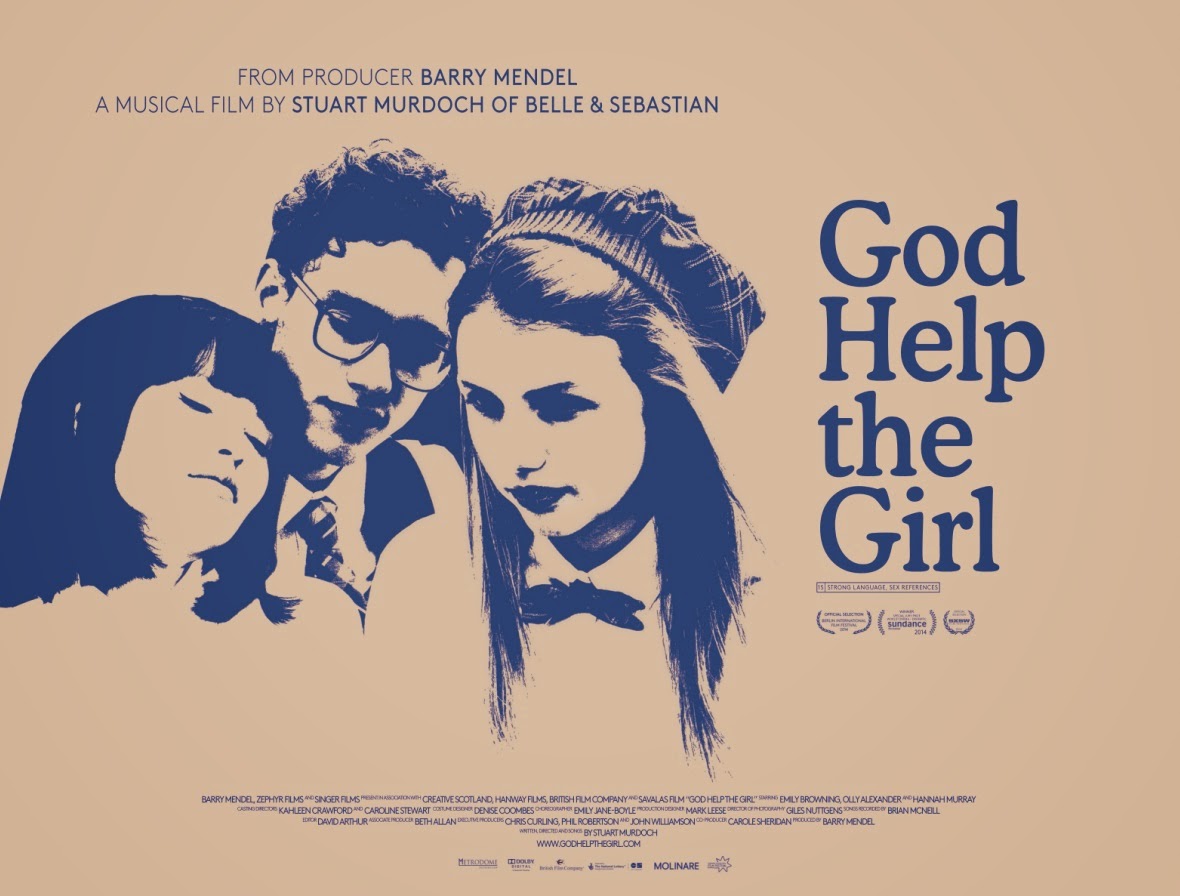 Eve is being treated for emotional problems in hospital but yearns to escape back into the world sneaking out to go to gigs. She writes songs that are like floods of words tumbling from inside her head but until she meets James the world’s least likely lifeguard and also a guitarist who has never fitted into bands he’s been in. Along with his friend kooky Cassie the trio gradually coalesce into an actual band.
The first thing you have to get your head round is that the whole thing is shot in Glasgow but there’s nary a Glaswegian in sight, All of our three protagonists seem to have been lifted, lifestyle, accent and all, from somewhere like Oxford. Secondly it’s unclear what year we are in. There are mobile phones but song lyrics are scribbled in books and flyers glued, photocopied and pasted on walls. Social media and the Internet are absent. So I’m guessing it’s around the millennium. Equally odd is how quickly the nascent band comes together complete with additional guitarists, drummers and even strings. This is after it takes a rather overlong 45 minutes to get to the point of anyone mentioning forming a group. Set against the urban locale of dingy halls and sweaty clubs it is rather incongruous to say the least and surely does nothing to represent the city in which it is filmed.
Yet there is something good here. Emily Browning as Eve holds the screen with grace, never going over the top with a role that might easily inspire some crazy overacting. Instead she internalises Eve’s problems in a manner that totally convinces. In an un-showy way it is one of the best performances in a film I’ve seen this year. Thanks to Murdoch’s decision to allow some improvised dialogue the conversations between the main three flow very easily making their relationships believable though some may tire of their self absorption after a while.  Olly Alexander’s James is endearingly quirky and his true feelings for Eve remain under the surface until an excellent scene where he kisses her and she says simply “It’s too late for that”,  It’s touches like this that mean the film avoids being too saccharine and it could have gone further down that route. The relationship side of things ends up being more interesting than the group because the narrative eschews any of the nitty gritty of that which means the middle section can seem more surreal than real.
I have to confess to having next to no knowledge of Belle and Sebastian’s music so assume that the songs here are similar to their output. There is something about the melodies that sticks with you and in the context of the film they fit very well even if they seem totally opposite to all the other bands we glimpse.  Plus the lyrics seem to narrate the relationships between the trio in a direct manner.
As you’d expect from a first time director and a decidedly indie music film there are some gauche moments (a parallel romance between Eve and a French singer is wince inducing) but equally there are some sparkling sequences notably an extended scene in an old dance hall that is the film’s most accomplished element. It is refreshing too to discover an ending which resorts neither to feel good climax nor shock tactics but simply shows the perambulations of people’s lives rolling on.