BBC1 25/12/14: written by Steven Moffatt / directed by Paul Wilmshurst / starring Peter Capaldi, Jenna Coleman, Nick Frost, Natalie Gamede, Michael Troughton
It is funny isn’t it this Christmas special lark? Once upon a time, Russell T Davies daubed a bit of tinsel and festive cheer across the opening minutes before leading us somewhere else altogether. Let’s face it you can’t get anything less Christmassy than David Tennant and John Simm slugging it out on waste ground. Yet it worked a treat, creating an event, something to natter about over the mince pies. Steven Moffatt’s approach has been much more traditional; caking his episodes in Victorian Yuletide iconography, exploring the mythos and fables of the season and generally doing everything possible except showing us how to stuff a turkey. Yet, they have been unsubstantial birds, his Christmas feasts; looking tremendous, tasting a bit dry, needing a bit longer in the oven perhaps (most of the tree one could be left in the oven!). So what are the chances that with his fifth go he gives us the present we actually want? As it turns out, very tasty indeed.
SPOILER WARNING- Plot details revealed, references to Santa beyond this point 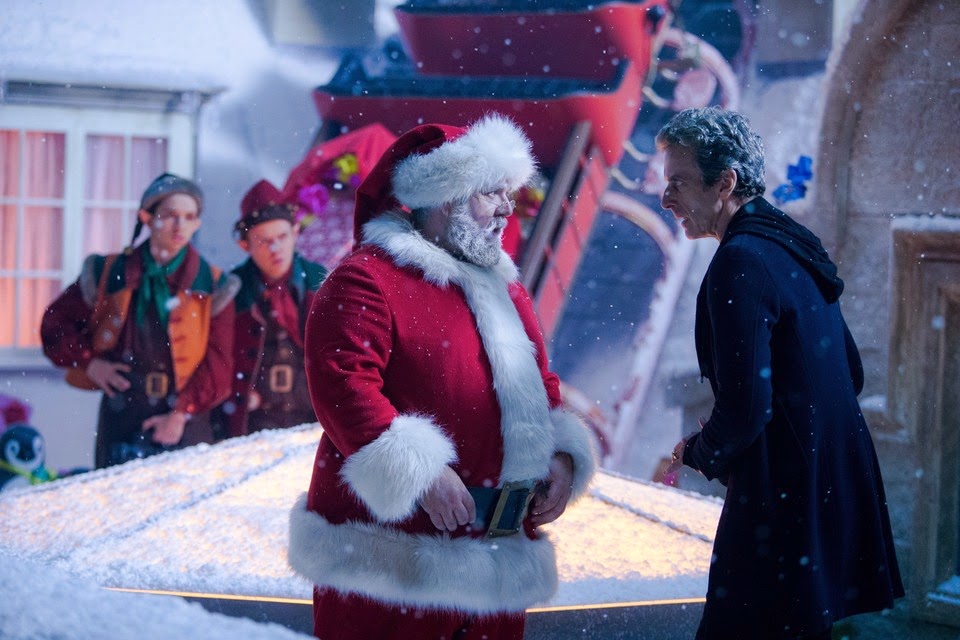 What is Christmas to different people? It’s all sorts really, depending on age, circumstances, and lifestyle and yet we all partake in rituals that any other day of the year we’d do our outmost to avoid. `Last Christmas` may be mostly set on a base at the North Pole (well for much of the time we think it is anyhow) but it says a lot more about Christmas than any of the previous 900 Christmas specials have. Steven Moffatt’s wily script- which really does feel like he spent a lot longer on it than any of the past three year’s festive offerings- explores the season through dreams and memories.
Some rather nasty for 6.15pm  broadcast `dream crabs` (you really think I’m going to attempt their name!?) have infested a North Pole facility that is so like a hundred other bases you’ve seen in the series that this becomes part of the plot later. They only wake when you think about them and once ensconced on your noggin gnaw away while you dream you’re in the loveliest place possible. The resulting illusion they create unfurls like Russian dolls across a series of well essayed scenes in which all the assembled characters are forced to work out what is going on.
There is a fabulous attention to detail- such as the recurring use of the phrase “it’s a long story”, the plot development that is so in plain sight you will kick yourself (or the nearest annoying Christmas monkey) when you learn of it and best of all the self-awareness of the characters in their dream state thrown against the fact they don’t actually realise they’re in a dream state. Moffatt doesn’t overlook the festive melancholy either; his observation that every Christmas is Last Christmas is delivered without fanfare but lingers afterwards. 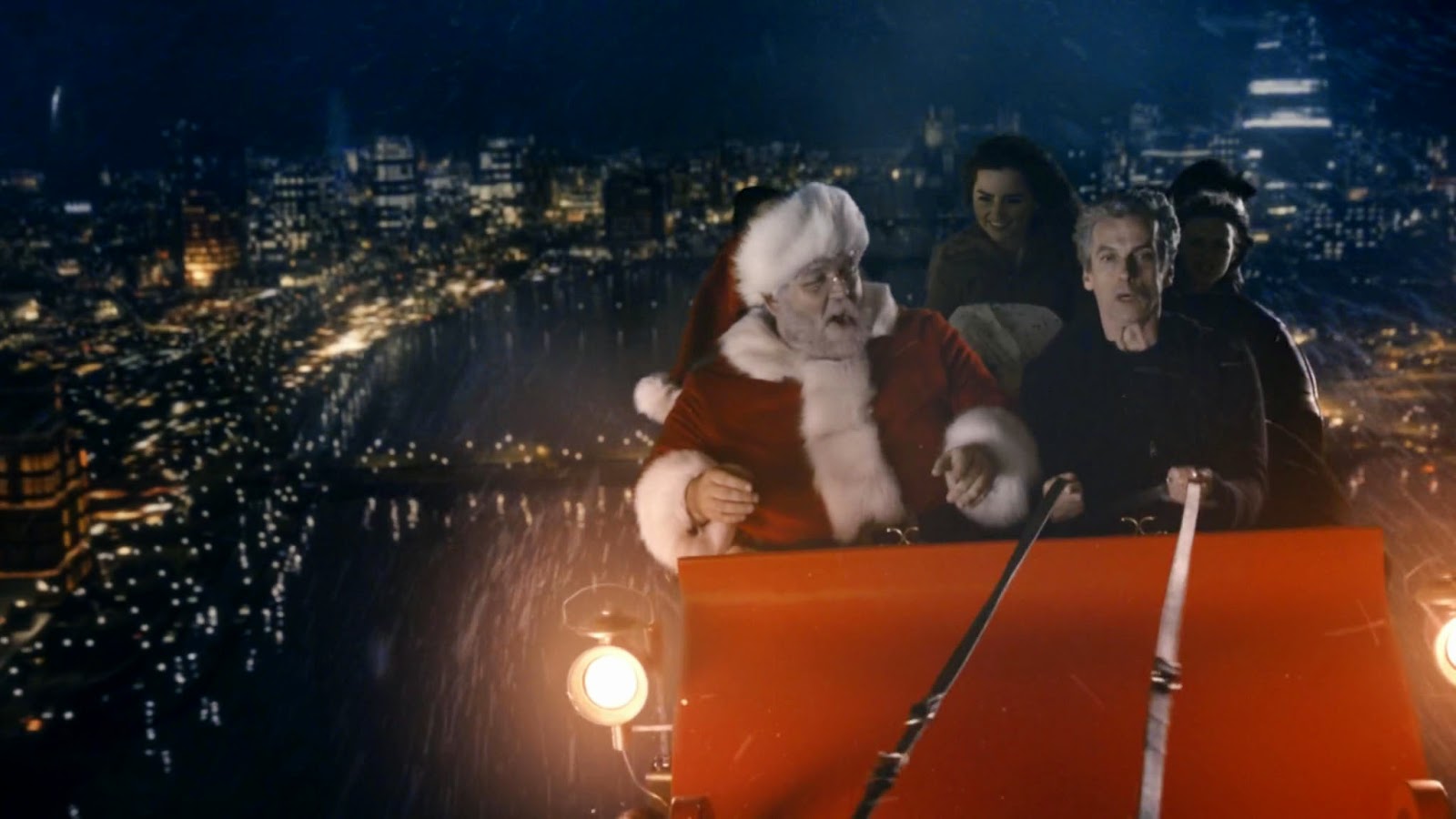 Then there’s Santa played by Nick Frost as a little grumpy but well meaning. Moffatt draws parallels between him and the Doctor with surprising ease. There is no definitive answer to the big question of course and neither should there be, but the suggestion of the importance of the power of belief is a good enough one to please secular and non-secular viewers alike. Some vicars (and others) may choke on their chipolatas though at the sight of the aliens themselves. Owing much to Alien the film they nonetheless show the virtue of stealing from the best and director Paul Wilmshurst ensures we’re as creeped out by them as possible while handling the more expected Christmassy stuff well. To its credit the production contains no children yet manages to skew closer to the child’s eye view of the season than the writer’s prior Christmas episodes. Just look at the Doctor at the end riding the sleigh; that’s Christmas for you, right there. Frivolous festive fun.
Niggles? Would like there to have been a little less of the Clara/ Danny unreality simply because it overplayed the point and especially as the real chemistry at the heart of the show now is between the Doctor and Jenna. Reminiscent of the Doctor’s sparky interaction with the likes of Donna, Sarah Jane or Ian, it’s a believable friendship borne of bizarre circumstance and all the stronger an arch on which to build the next season for it. I’d also liked to have had more of the chippy elves who are like bad tempered children’s TV presenters and some of the underutilised base team. In particular it’s a shame Michael Troughton gets less to do than he should.
Minor niggles though because as a whole `Last Christmas` is by far Steven Moffatt’s best Crimbo special and a great last course for what’s been a fulfillingly creative year for the show.
PS Peter Capaldi and Jenna Coleman are both great but I don’t need to say that in every review do I?
PPS Just did spellcheck on this review and instead of Crimbo I was offered Crambo!! What the jiggins is Crambo???