Towards the end of this breathless movie a city is being attacked in as chaotic a manner as you’d expect. Vehicles exploding, people running, buildings collapsing and so on. Having been in the midst of all this our point of view is slowly yanked skywards allowing us to view the wider extent of it in a memorable tableaux. This is just one of a myriad of moments from director Wes Ball that propel what should be a simple action film into something better. It’s typical of how The Death Cure , the third and final part of the Maze Runner series, never stops moving in exciting and interesting ways pulling the maximum thrills from what is ostensibly a thin narrative.

We’re in a world decimated by solar flares and subsequent infection that has wiped out most and turned others into so called Cranks or as you and I know them zombies. Having escaped a deadly maze in which the first movie was set and following on from the end of The Scorch Trials, the remaining Gladers- now with the help of others- plan to rescue their friend Minho from a train in a daring escapade that occupies the opening section of the film. Being Thomas, the plan is not just to get onto the train and free people but decouple and lift a whole carriage! It gives you some idea of the visual ambition of The Death Cure. Some films would have this sort of thing as their finale but it merely proves to be the first salvo in a near two and a half hour romp in which barely more than a handful of scenes take place in stillness. Mostly it’s running, chasing, escaping out of or breaking into various scenarios.  Soon our heroes are off to find the Last City which as its name suggests is still a relatively intact glass and concrete metropolis protected from the mayhem outside by an “impenetrable” wall. Obviously it will prove to be anything but as an especially over the top gesture by one of the supporting characters soon opens it up. Along the way the Gladers meet up again with Gally- last seen with a spear in his chest in the first film- who turns out to know a way into this supposedly watertight domain. Of course he does! 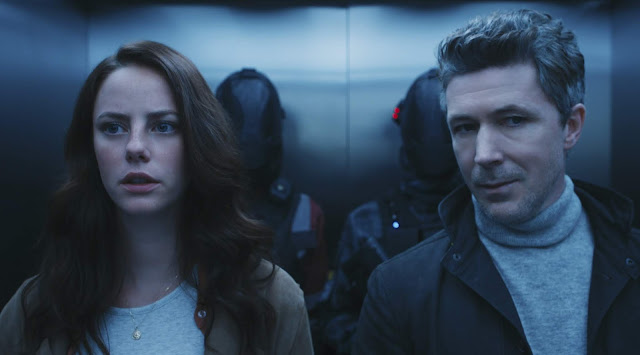 You see, while the sheer momentum of the film is absorbing and exciting it means you don’t have to stop and think about the sheer convenience that serves most of the key developments. Most obviously there’s the fact that Thomas and co turn up exactly as the people’s rebellion launches courtesy of a handy self sacrifice of a character we don’t really know much about. Gally just happens to spot them in a crowd of thousands. There are times when its difficult to track Teresa’s chain of thought too- is her flip flopping out of divided conviction or just to push the plot along? And I still think calling the antagonist’s organisation WCKD is too obvious even for children.
Each of the main characters does have a bit more than just running around to deal with allowing for a more rounded film than either of the first two. Kyla Scodelario’s Teresa in particular remains a challenging character who will test the audience’s loyalty. Playing against that Dylan O’Brien’s Thomas remains (too?) predictably moral throughout whatever is hurled at him. At times this does make the character seem something of a bland hero and the big speech you expect him to give at some point never materialises. Newt (Thomas Sangster) who has been the sidekick till now has his own dilemma to resolve and this leads to the film’s most emotionally charged scenes as he struggles to contain the infection which has reached him. Aidan Gillan’s sneer was made for Janson a villain who personifies the film’s forward motion as he never gives up. 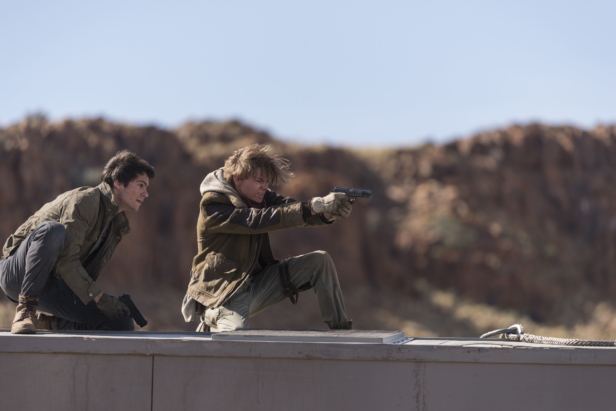 After the raid on the train, there are a number of stand- out scenes including a peril fraught  journey through a Crank infested tunnel, Minho’s nightmarish experiences and the last section which takes place inside the Last City and in the gleaming corridors of WCKD's headquarters. Wes Ball has a way of shooting the whole thing to pick out the most desperate scenarios, the people at most risk and he successfully conveys the random brutality and jeopardy that occurs. Yet he saves the very best till last juggling multiple character narratives as the city is assaulted. Several times you think we’ve reached a final showdown only for it not to be over just yet!
The film does save space too for some more cerebral moments though these are stated with the sort of broad arguments that seem normal in an age when even the US President communicates by Tweets. WKCD’s methods may be questionable but their aims are understandable enough. No doubt intended to mirror well known corrupt regimes of the past, from a UK standpoint they seem indistinguishable from the US secret service at times. Laying out the motivations in a little more detail here does also lead one to question how they justify the whole Maze scenario of the first film which incidentally is barely referred to here.
The Death Cure is best enjoyed by not asking any awkward questions and treating it like a fairground ride in which case you’ll be thrilled at every turn of the corkscrew.