Star Wars fans- like fans of many things- are never happy. They want new films that are almost the same as the original series yet when they happen they complain of lack of originality. Throw in a curveball and they don’t like that either “it’s just not Star Wars” they moan. This is probably why we end up with Solo, a perfectly serviceable big screen romp but one devoid of any particular purpose. Had it been populated by all new characters it might have been more impactful. Being a prequel though we know at least two of the lead characters and their spaceship will make it to the end so there’s a lack of jeopardy when it matters most. We’re also waiting to spot those throw forwards so we can tick off how Han got this, why he says that, etc. It makes for a curiously flat watch because about 40% of the aspects that can thrill us in a movie are just not going to happen. Whatever scrape Solo gets into you know he’s going to make it. 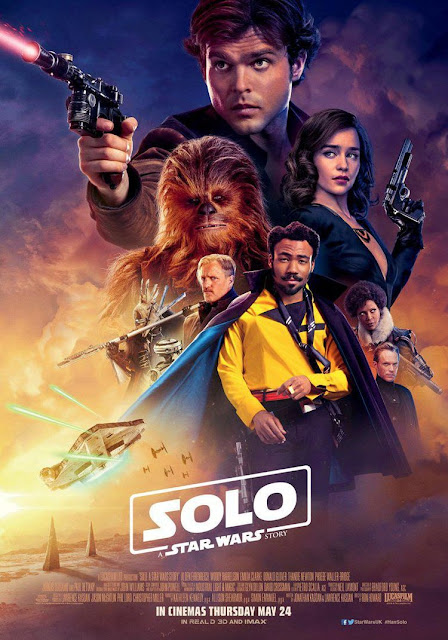 We join the action at an indeterminate point on the Star Wars timeline. Han seems to be in his early 20s so that means we’re at least two decades pre New Hope. Which doesn’t quite explain the presence of a certain character who pops up for a cameo later on but timelines are funny things. Anyway Han and Qi’ra are separated when on the run and we follow Solo’s tricky journey for the next few years including his first (somewhat gruesome) encounter with Chewbacca. Eventually Han and the Wookie team up with Tobias Beckett’s band of adventurous criminals who are a sort of galactic Mission Impossible team. 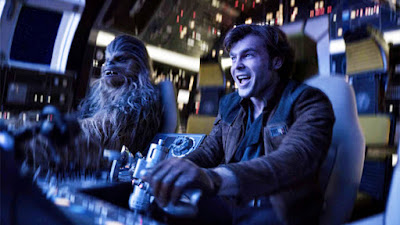 Played by Woody Harrelson, Bennett proves to be the film’s most interesting character and something of a mentor to Solo albeit in a practical rather than vague Yoda way.  Their guarded conversations are good and you can see how Han is learning from Beckett. Donald Glover as Lando also livens up proceedings though tends to be used more as comic relief, the tone set by his preening appearance in a crucial card game. Despite Emilia Clarke’s presence Qi’ra is never really developed with little detail as to how or why she ends up as the right hand woman to antagonist Dryden Vos, himself is a thinly sketched character. Of course what we really want to know is how Alden Ehrenreich manages to sketch the young Han given that we’re all so familiar with Harrison Ford’s version. Actually he does a good job in channelling some of Ford’s mannerisms without attempting an impersonation and can easily be seen as the same person in younger years. Those references to Solo iconography are done well enough including, curiously, how he acquired his surname but it doesn’t overwhelm the film too much.
An escapade on a high speed train that clings to the side of snowbound mountains is an early highlight, an extended set piece that suggests great things.  As it turns out this is an early peak never quite matched by the subsequently drawn out chase sequences packed with familiar flyboy antics and laser battles. Director Ron Howard continues the recent Star Wars films’ trend of slightly more downbeat locales so not everything is gleaming or metallic but it is the story that causes the film to struggle over an overlong two and a half hours. 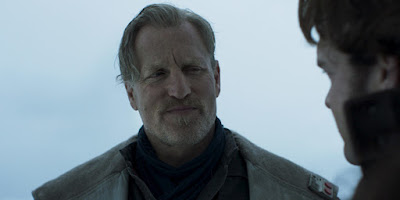 It doesn’t help that the characters are self -serving with their own agendas so we’re a long way from the noble causes and principles that usually mark out this Universe. There’s also a running gag about Lando’s female voiced android wanting “equal rights” that feels topically shoehorned in and not especially respectful to such an issue. That being said the film’s concerns do make a change from the more high level politics of the main films. By the time the team are on their main mission it felt as if this is really where the film should have started.
Overall there is a sense of repetition after a while and a feeling that the succession of double crossings that occurs in the last half hour serves little purpose other than to extend an already over extended story.
Posted by John Connors at 22:59