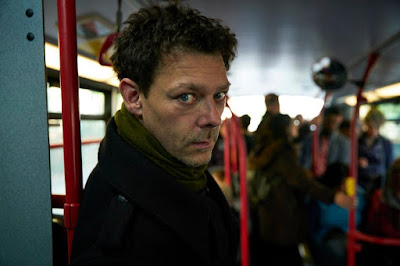 That aspect is actually one of the episode’s weaknesses though. With Blackwood’s modus operendi established as killing `good` people to try and force God to act, his attack outside a hairdresser doesn’t quite fit, especially as he does without his usual mask on. And in this day and age would none of the people inside the shop think to call the police or at least film what was happening instead of standing there looking shocked? Plus at the end the camera does linger several seconds too long on a burning corpse too. I was also wondering about whether Hicks would really threaten to waterboard Father Dennis to try and get him to reveal the identity of the killer. Is Cross suggesting Hicks’s ruthlessness which means he might be seen to be more likely to have killed his partner? 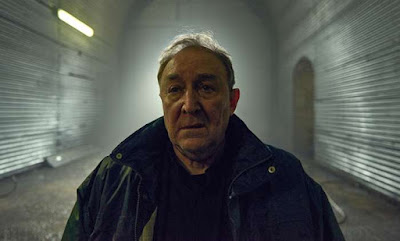 Coyle’s performance throughout is as evil as you like, one you’ll remember. Blackwood’s goading of a charity worker and his smile as he surveys the panic he’s created are certainly powerful. His ultimate demise too is interesting. After a neat diversion which leads us and the police to believe he’s been killed he turns up amidst a crowd of well wishers who have come to support the priest. This in itself is an unexpected turn suggesting that Father Chapman’s faith in human nature is not entirely misplaced. There’s an odd conclusion though when Hicks and Renko allow him to throw a few punches at the now contained Blackwood which the latter seems to find amusing as it confirms his idea that there is no God.


Cross continues to focus on the worst things people will do to get what they want, whether in life or in solving crimes. There’s one scene after Blackwood’s name is given to counter terrorism and pinned on a board only for the camera to pull out revealing dozens of other names already up there. The series is like that; just when you think you’ve got a handle on a character they do something unexpected.

Episode 5: Written by Neil Cross / Directed by Richard Senior/ showing on BBC1 and available on the BBC iPlayer


If the first four episodes maintained the overall appearance of a cop show with splashes of spy drama, this fantastic fifth becomes a thriller. Over the course of the hour Neil Cross flips, switches and re-directs the narrative to create an incredibly suspenseful episode that frequently teeters on being predictable before he takes that prediction away replacing it with something that makes you edge a little closer to the end of that seat. And the last few minutes….


Matters are kicked off by Renko’s absconding son Daniel who has of course been handed a file revealing the identity of his father. Before long that man is lying in a heap of blood with some especially nasty ice pick work re-organising his body parts. Of course we know who he is, so does Renko and so does Hicks but neither of them know the other one knows. Armed with their agendas- hers to protect him, his to find that flash drive- they begin a gripping game that you can’t really call cat and mouse as it’s more cat and cat. Driving it all of course is the sinister Grace Morrigan with Nikki Amuka-Bird’s contained performance being the perfectly infuriating counterpoint to the increasingly manic Renko and Hicks. We’ve seen Daniel commit the crime, we and his mother and Hicks know he’s guilty but somehow Cross’ light heeled script makes us actually root for him as he becomes sucked into a very dangerous place. There are whole big screen thrillers with fewer twists than this and even fewer writers who can choreograph them as well as Neil Cross does here. I know some people may watch this and start to question the likelihood, even the timing of these developments but if you watch this episode with an open mind you’ll almost certainly be pulled in.


You have to applaud the cast as well for the way they make a set of mostly unlikeable characters so compelling. Renko and Hicks’ ongoing mutual mistrust yet need to help each other is portrayed so well by Agyness Deyn and Jim Sturgess who both bring an earthiness to their performances. And as for Nikki Amuka- Bird her stone cold Morrigan would be no more than a James Bond villain were it not for those flashes of emotion that just occasionally cross her face; in this episode it happens in the car when Hicks asks her again about Hard Sun.


What I especially like too is the way Cross also includes a secondary plot based around Hicks' wife and his former partner’s wife. Their simple conversation over a cup of tea may appear to be a respite from the tension but in its own way it is just as important. Then there’s the final reveal which comes so out of the blue I think I actually spoke to the device I was watching it on! I’m not normally the kind of person who talks at the TV but this is such a superb and sudden reveal it spins the dice once more. Neil Cross says he has five series of Hard Sun planned but he may already have penned the best one…..