Season 15@40 There it sits, unloved, at the foot of many a fan poll almost from the moment it was shown. It came bottom of the Doctor Who Appreciation Society series vote in 1978 and has remained rooted nearby ever since. With `Underworld` there is no leeway. It’s hardly even Marmite; in this case nobody likes it. So, why is this? Has anybody in fact really watched it? Well, I did. And do you know what? It’s the best Doctor Who story ever. Ok, I’m exaggerating but it is certainly not the disaster it is often described as. I think this may be the first time I’ve actually watched it properly because I saw things I’d not noticed before.


I took in the story for example. Like a lot of Doctor Who from this period, it’s based on someone else’s story; in this case the Jason and the Argonauts legend yet it actually covers it’s sources rather well. Yes there’s the origin of the names (Jackson = Jason, P7E is Persephone etc) but again this is a trait of all 1970s Doctor Who. Don’t think for a minute that names like Sutekh or Krynoid or Morbius are original. What I mean is the simple but effective way Bob Baker and Dave Martin reassemble myth as serviceable fantasy so that when someone says “invisible fire breathing dragons” you get lasers or the map of the caves is tree shaped and so on. 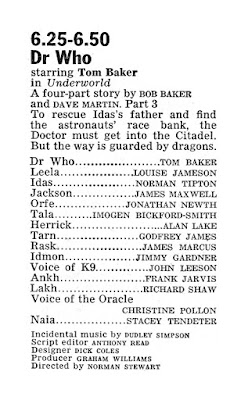 I like the way the narrative is so busy even if it does include some staples of the series of the time. The fact that episodes 1 to 3 are only about 21 minutes long each seems to make the entire story fast moving. Given the problems associated with making of the story, Norman Stewart’s direction is generally strong and one surprise is a large number of extras in part 4. Of the cast, Tom Baker and Louise Jameson dominate as you’d expect while you do wonder why an actor like Jonathan Newth is given a less prominent role; he might have made a better commander and you have to commend Alan Lake’s enthusiasm for his part as Herrick. Of the Trogs, only Norman Tipton has enough screen time to make an impact which he does effectively even if they forget to give him any lines towards the end.  I did wonder why the Seer’s soldiers had to wear what look like executioner’s hoods even when sitting at their desks though the imagery is interesting. Maybe this `look` originates from an earlier version of the plot?


The `quest` story is one of the standard narrative ideas that a Doctor Who story could only depict if it was at its conclusion unless you spread it over a whole season like the Key to Time. The Minyans lengthy Quest is seen at its conclusion here but there are a lot of other elements in the script even if not all of them are explored as well as they might be. The idea of descendents of a technological race de-evolving into primitives has been used on the show before- not least on the previous season’s `Face of Evil`-  but `Underworld` shows us three distinct sets of people. On the one hand there’s the so called Trogs but there are also the Seers’ guards and the Seers themselves.


Perhaps Part 4 could have explained a little more as to how this division occurred and particularly how the Seers developed metal heads. I think those heads are one of my favourite pieces of design in the whole of that season; suggesting a steampunk mentality and perhaps a machine based life form. We never find out and we don’t see enough of the excellent design.  In a 1978 interview script editor Anthony Read said: “The computer created them. They were servants of it and were the equivalent of high priests in Greek legend.” So, that’s the explanation but it could be clearer in the script. 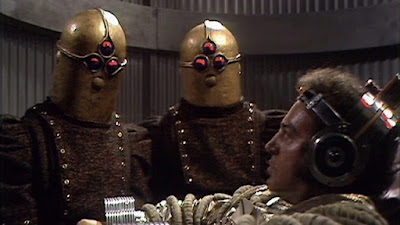 Bob and Dave were the 1970s go-to team for ideas that the series production values could barely contain. You wonder whether this was deliberate, whether the producers were testing the limits of visual effects by commissioning the duo who would surely include near impossible to render elements into their scripts. `Underworld` is actually atypical Bob and Dave because they were asked to write something that did not break the bank so they just had the formation of a planet and lots of caves.


Famously the story breaks new ground by rendering the caves on blue screen utilising a technique called Colour Seperation Overlay, already a staple of the show. In pre CGI days this was how it was done and contrary to reputation, the effects here are no worse than many a Doctor Who story and better than others. You only have to recall the dodgy looking sequence in `The Green Death` when the Doctor is rowing through a sea of giant maggots to see how such an effect can draw attention to its own flaws.


There is some blurring of limbs from time to time but much of the blue screen work in `Underworld` is of a very high standard. Some eerie sound effects and an echo on the speech gives the whole thing a surreal quality.  I’d say that counts as a huge success, probably much better in fact than had they used cardboard rocks. The end result looks strange and for its time quite a notable achievement for the team.  Moreover you soon get used to the look which seems to give the story a breadth that others lack. Obviously it would have looked even better to have filmed in actual caves but this is a better substitute than sets would have been. 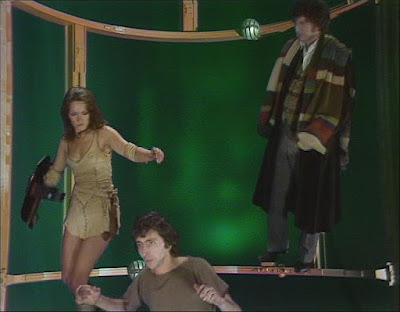 Nowadays each story seems somehow linked to a greater plot but in the 1970s Doctor Who was for the most part a series of unconnected adventures that would occasionally acknowledge the programme's past. `Underworld` adds an important fact to the heritage, in that it is said that the Time Lords’ actions on Minyos - which went wrong – actually caused their policy of non- interference, the very same policy which the Doctor rebels against. If someone wrote this story today this would be the kernel of the plot; the Doctor inevitably finding himself having to face the same dilemma that the Time Lords got so wrong all those millenia ago. What is delightful about the old style series is that a fact like this is dropped into the dialogue and left to simmer in the viewer’s mind. One criticism of the plot would be that all of this does get lost by part 4.


The DVD release back in 2012 included some fascinating footage of filming in which we see such delights as Tom’s irritability, the odd way the entire set seems to move around through the camera and how sparse a view the cast really had when on set. The documentary attests to how time consuming a method of filming this was and it’s a testament to the cast that none of this frustration shows through in the final performances.


Look at the ratings too episode one got 8.9 million, episode two improved slightly with 9.1million before part 3 went back to 8.9million and –gasp- the final part was watched by 11.7million. That makes an average of 9.6million. So you see it wasn’t so unpopular after all!
So what did fans think of Underworld in 1978 then.....? 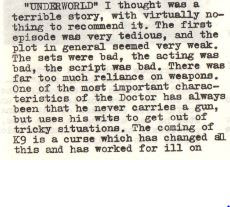 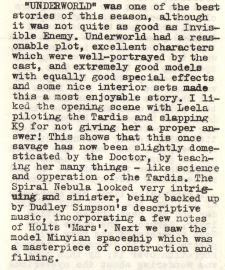 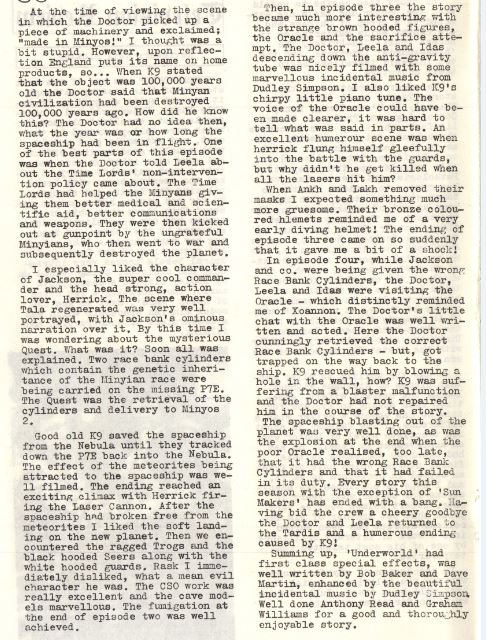 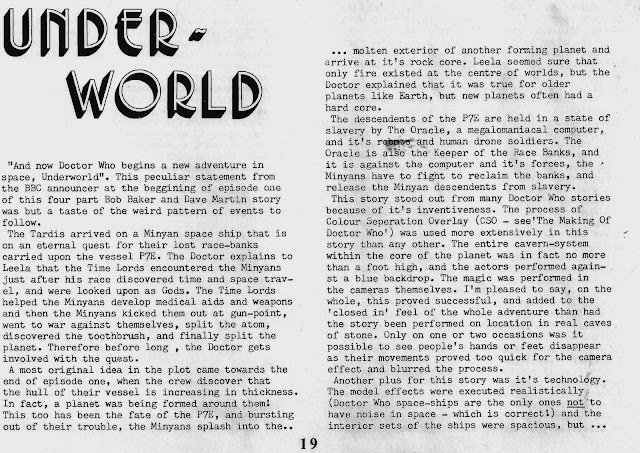 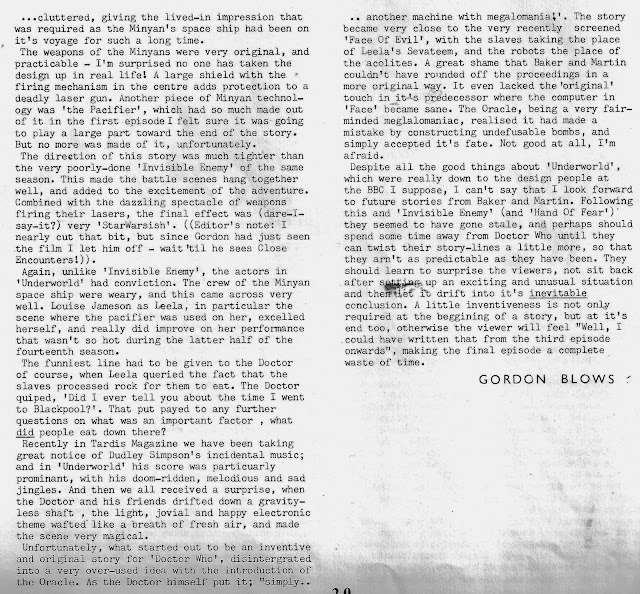 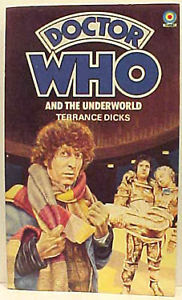