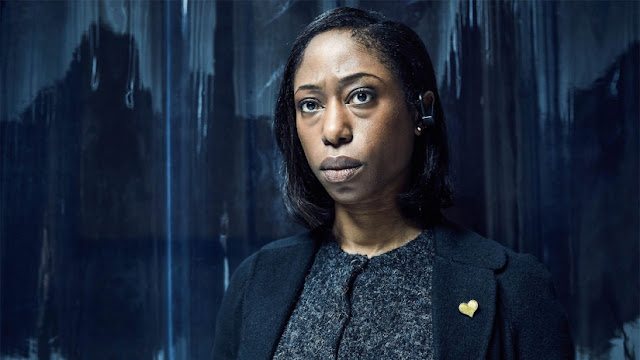 Then in quite a masterstroke we cut to a month later and even though it leaked the Hard Sun story has been successfully dismissed as a hoax by the government. Only a few cranks we’re told believe it. On the face of it you’re watching things that may be only slightly more likely than the goings on of a sci-fi series but the threats seem harder, the peril more immediate. Plus if you consider it, it’s quite easy to hoax large audiences online these days. It reminds me of the first instance of this when as 9/11 was playing out there were people who believed it was a hoax.
It’s partly the scenario yet writer Neil Cross has to find ways to make those in the know care about the future. After all would people really expend so much effort blocking information whilst drafting elaborate preparations for what would effectively be project managing the end of the world? Of course they would; it occupies their time and stops them thinking about it. Grace’s cold efficiency only just masks her fear. Crucial to this is remembering the wordless scene in part 1 where before we knew who she was we saw her paralysed with fear upon first seeing the Hard Sun file. The actor- who has played this sort of role before and would actually be quite un-nerving to meet in Waitrose- does manage, if you pay attention, to show glimmers of that fear even when threatening innocent people and directing a mob. It’s such an understated performance many might miss it and just see her as the antagonist. 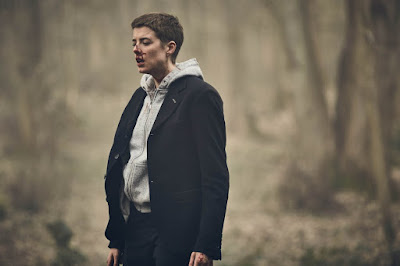 Likewise Cross weaves Hard Sun into a storyline involving a serial killer. We’re spared little of the gory details as he slaughters several yet his motivation is driven by the information that the world will end in five years. The second stunning sequence takes place as Renko and Hicks try to stop him killing his two kids whom he has taken from his estranged wife. Set in the woods with handy horror film fog lurking (when do you ever see it in real life?) it’s just as tense as that opening sequence was.
Neil Cross has said he has a five year plan for the series if it gets strong enough ratings to carry on and that the end will be no cop out. He’s certainly set up an intriguing dynamic between the two main characters whose motivations and viewpoints are opposed but as Hicks tells Renko “you’re the only person I can talk to about this.” The irony is they hardly ever tell each other the truth about any other aspect of their lives.

Episode 3: Written by Neil Cross / Directed by Nick Rowland/ showing on BBC1 and available on the BBC iPlayer
If the first two episodes spliced pre apocalyptic drama with serial killer mayhem, this masterful third sees Neil Cross unfurl another level to what is becoming a fascinatingly tangled set of circumstances. Through the actions of mentally scarred Thom Blackwood he looks at the nature of religion. In a scene that would probably have Christians gulping into their tea he chooses a confessional to have Blackwood unravel the teachings of the church. No doubt these are things many non religious people think but Cross’ macabre take is to have Blackwood pick random victims to kill because they are good Samaritans in order to see if God will do anything to save them or punish him. Not that you’d agree with his actions but like all great antagonists his argument in of itself is persuasive. He has seen the worst of humanity working with refugees and felt an absence of God. Now he wants to call Him out, to challenge him. Played with disturbing intent by Richard Coyle this is a character whose story lends a different focus to the impending apocalypse. Director Nick Rowland adds a menace with some interesting shots and Coyle is matched by Dermot Crowley’s refreshingly portrayed Father Chapman. You expect tv drama priests in this kind of situation where the very essence of their beliefs are tested to crack but Cross writes him as a stubbornly determined man. A later scene sees him refuse to name Blackwood even when presented with photos of the victims and told others will die. The questions this raises are of course too big to be confined to one episode so this is only part of Blackwood’s story but it is perfectly matched by the ongoing cat and mouse game between Renko and Hicks. 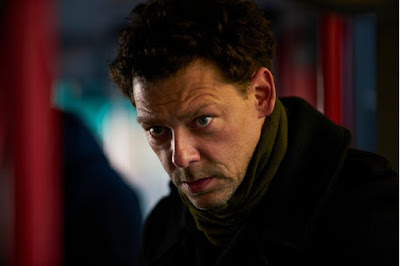 While she is now becoming convinced either that Hicks is innocent or that it doesn’t matter if he is or not, he is on the receiving end of a visit from the spectral Morrigan acquiescing to her demands to help her get information in order to protect this family. You might argue that Cross has placed too much narrative ballast on Hicks; the impending arrival of a new baby is bound to soften his edges but it brings up the question of how far people will go to protect their loved ones.
Production wise this is winningly filmed from the opening shot that follows umbrellas to the depiction of the murders and the presence of Hard Sun related graffiti dotted around the city. The outbursts of violence are ugly and terrifyingly realistic notably when Renko’s son tries to kill himself. Each episode is crammed with developments and revelations yet Cross manages to keep a focus on each part of the plot. It makes for absorbing viewing because you don’t know what might happen next; the palpable sense of a city becoming confined and frightened is there in every scene.
Posted by John Connors at 23:11