Where exactly is Electric Avenue?


By the time his single `Electric Avenue` was released in 1983, Eddy Grant had already had a long career which began in the Sixties when he was a member of The Equals who had several UK hits including `Baby Come Back`. He was also a songwriter for artists such as Prince Buster. After leaving The Equals in 1971 he began a solo career during which time he also worked as a producer. `Electric Avenue` arrived after a string of hits including `Walking on Sunshine`, `Do You Feel My Love` and `I Don’t Wanna Dance`. The sound on these is unusually sparse for a successful artist of the Eighties when bigger and bigger production was the order of the day. `Electric Avenue` is especially tightly produced- in fact there’s a sound that could easily be a piece of elastic stretching that re-appears several times! The controlled, minimalist feel of the song enhances its lyrics which reference life in the London area of Brixton. However when he declares “we’re gonna rock down to Electric Avenue” where are they going? 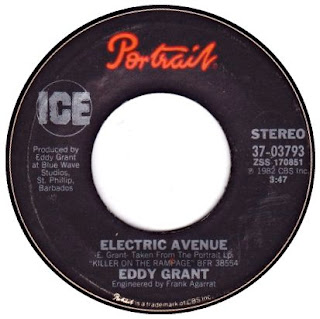 Electric Avenue is actually the name given to a shopping area in SW9 in London. It was once a well known shopping destination, famous across London. Back in the day the area was considered to be a place for high fashion with its walkways and the proximity of branches of Bon Marche and Quin and Axtens. In fact it was sometimes called `the Oxford Street of the South` until the post-war era. The nickname came from the fact that in the 1880s it was the first shopping area to have electric lights installed which allowed retailers to remain open after dark a hitherto unheard of thing with the gas lighting that had been used till them.


The song itself is about the Brixton riots a century later and was always going to be a tricky one to squeeze into a pop song without it sounding angry and shouty yet `Electric Avenue` achieves it perfectly by painting a handful of vignettes depicting the sort of life that led to the tensions. The lyric acknowledges “on the street there is violence” and by mentioning something seemingly as mundane as there being nowhere to hang out washing it gives it a real feel for the everyday problems people who lived there endured; an unexpected yet telling comparison. In the second verse Grant likens the area’s inhabitants to “soldiers” who can’t afford anything advertised on tv despite working hard and in a reference to, presumably the government declares “deep in my heat I abhor ya” before introducing the even more serious issue of being unable to get food for their children. 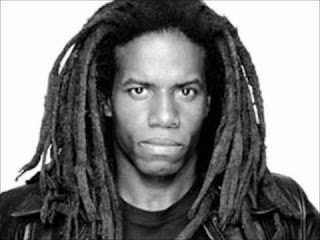 The third verse has him asking “who is to blame in this country?” but never in the song does he appear to actually approve of the violence though some have interpreted the chorus “We’re gonna rock down to Electric Avenue, And then we’ll take it higher” as a reference to rioting. On the other hand it’s been suggested that this refers to smoking something strong to try and forget the hard times.


The video shown on the BBC4 TOTP repeats lately uses something similar to the posterize effect you get on phones to add a menace though for some reason Eddy is sitting down for the whole thing watching tv. However there are other versions on YouTube without this effect. The film doesn’t really capture the song too well as it wasn’t even filmed in this country and depicts lots of people riding around a Caribbean town on motorbikes.


There’s an interesting addendum to the song in that last year Eddy Grant re-opened the area after a refurbishment turning on the lights of Electric Avenue and the public were indeed invited to rock down to Electric Avenue.  He said: “ It’s a huge privilege to return to London, the city where I grew up, to be the guest of honour for switching on the lights at Electric Avenue — the street that has great cultural significance, not just for inspiring my song.The street has truly returned to its former glory and will be a great hub for the local community.” 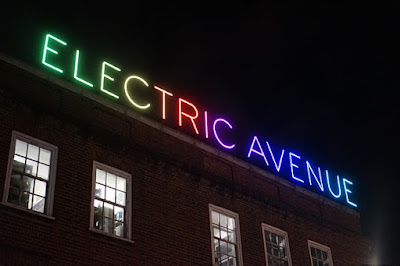