With a King Kong movie nowadays the issue of whether the giant ape itself can be convincingly rendered is no longer relevant because of course it can. The question is – what do you do with a brilliantly realised enormous animal? Peter Jackson had a fair go at it a while back but his film was overlong and took half an hour to even set off to sea. Kong Skull Island is brasher, less arty, certainly more tongue in cheek but definitely more to the point. Our first sight of Kong is within five minutes of the start and after half an hour we’ve made landfall on the lost island after getting through the perpetual storm that surrounds it. This intensity is maintained throughout with thoughtful reverie kept to bite sized exchanges and no character safe. Ones you think will obviously make it to the end don’t and vice versa. 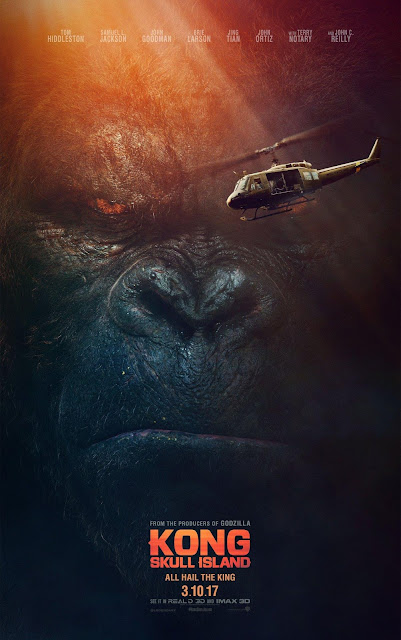 Raaarrghhhhh Spoilers will bite your head off after this point!


The film does ask us to accept increasingly far -fetched developments- the wreck of a plane being turned into a boat in particular- and the various beasts considerately attack one at a time but the momentum drives everything forward unstoppably through several heart stopping sequences. If you want a serious film this is not it- check the name again!
The characters are fairly generic though wise casting means actors make them work anyway. So we’ve got the zealous explorer trying to get government help for an unlikely expedition but its’ John Goodman so we’re interested. There’s a photographer (with a seemingly never ending roll of film) who will obviously be the film’s conscience but she’s played by Brie Larson so she’s likeable and doesn’t even scream! There’s the survivor who has been stuck on the island since World War 2 – the action is set in 1973- but as its John C Reilly we’re entertained. In fact he steals the film especially as he’s hooked up with a deadpan indigenous tribe who neither speak nor smile. Their presence- and a mention of giant ants that’s never followed up- suggest some trimming was done to make a leaner film. Oh and there is Samuel L Jackson selling the role of a weary Vietnam War veteran who doesn’t want to go home and becomes obsessed with killing Kong. It’s one of those deliciously manic Samuel L roles that we all like. For a hero there’s Tom Hiddleston as a tracker who seems rather laid back about it all. Whether it’s the actor or the writing, he’s the only person who doesn’t seem to embrace the period setting.

The other characters make less of an impression with the exception of Shea Wigham’s  laconic Cole and Thomas Mann’s wide eyed Slivko. Most of course are there to be variously skewered, squashed, hurled, crushed, swallowed or otherwise decapitated – and not just by Kong as there are other dangers lurking on the island. This turns out to be used to much better effect than it was in the Peter Jackson film where the other creatures detracted from the main story. This time their presence turns Kong from the aggressor into the potential protector. The only reason he attacks the soldiers in the first place is because they are lobbing seismic charges about in what is his home.
As the name suggests there’s nothing especially subtle about this film though the flecks of period music and a rather lovely cine filmed coda alongside the credits do add a little extra depth. Some may interpret the destruction of the US helicopters as symbolic of the all but official defeat in Vietnam but then again it may just be there because it looks cool. You’re never sure with this sort of film. Mind you having Goodman’s character declare “Mark my words, there’ll never be a more screwed up time in Washington,” takes on a more amusing context right now though surely a few years back the script writers could not have envisaged there would be such a time. The script adds some strong notes on man’s failings- both Goodman and Jackson’s behaviour pay testament to that, but its difficult to believe that our first action in a new locale would be to drop bombs especially for the benefit of scientists.
The film manages to maintain the enormous strength and primal qualities of Kong while making us root for him by the climax. Even the traditional sequence where he sees and doesn’t harm the girl – and later come to her rescue- is convincingly set up without trying in any way to humanise the ape. It remains a savage creature but develops a dignity too. 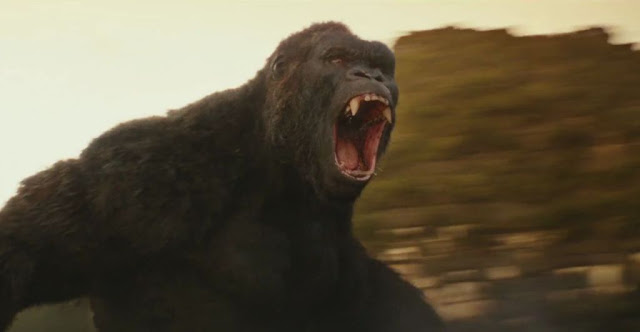 The action is edited with pin sharp precision and some excellent sound effects work with the motion captured Kong as good as any mo-cap thing we’ve yet seen. This Kong is ginormous too- an early scene that has him standing in front of a red rising Sun really captures that size. A sequence where he takes out the Army helicopters in a chaotic fury is awesome.  The others creatures are as impressive including an eerie giant spider, a log like locust and the big lizard things that provide the main threat as matters progress.  All the way through director Jordan Vogt-Roberts finds ways to make the action interesting and exciting.
The film is a thrilling ride that will keep all but the most curmudgeonly entertained from the first minute right up to the post credits scene.