Mrs Tyrrell and the huge block of cheese


Mrs Tyrell grew increasingly grumpy at the prospect of having to carry a large heavy wedge of cheese to work each day. Her husband did not even offer her a lift as he travelled to work early by gyrocopter leaving his wife to struggle with the cheese on public transport. This was in the 1950s when cheese was of course much heavier than it is now. She did try to use a taxi but in those days cheese was banned from taxis so unwilling to jostle for position on the tram and risk the cheese falling on the floor, Mrs Tyrell started to walk to work. Accompanying her were two friends Mavis and Alma who would each take it in turns to lug the block for a while. 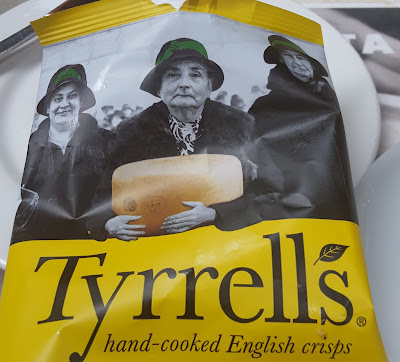 They’d all met a few years earlier when the three of them bumped into each other when trying on the new trendy monochrome –with – a - green ribbon hats. The other ladies eventually got a job in Tyrells Crisp Emporium where they became crisp tasters. This was a much sought after job as they had to eat every hundredth packet to leave the production line and they carried on until they became too wide to fit inside any building.
The decision to put Mrs Tyrell on the current cheese and chives packet could be seen as something of a joke amongst her descendants as she was a well known campaigner against chives. “I will not have them, cannot abide them, do not recognise their right to exist” she once said. However many years later her grand children took advantage of new rights for chives to include them in their crisps. Some though feel that Mrs Tyrrell would be pleased. “She came from a generation that viewed chives with suspicion” said her granddaughter last year, “but if she’d understood chives more I think she would approve.”
Posted by John Connors at 16:46