A refreshing change from the superhero and special effects driven films dominating 2016’s cinemas, this sequel about a team of magicians who use their skills to expose corruption is just as intriguing as the first film. It teases its characters with twists and turns and also its viewers by explaining some but not all of the tricks we see. So for example a scene in which a character appears to have control over the rain is then explained to the audience watching as being a trick involving lights and large fans. Then the character is seen to fall backwards into a puddle and all that is left is his coat. So how did he do that? We never find out. This literal and conceptual sleight of hand means NYSM2 maintains the momentum of it’s predecessor. 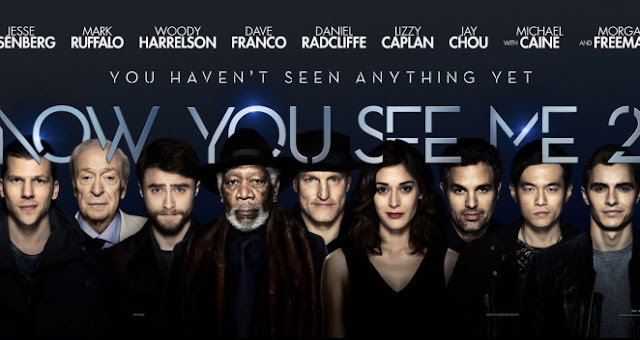 We’re 18 months past the events of the first film and Thaddeus Bradley is incarcerated (rather snugly as it turns out) apparently determined to have his revenge on CIA mole Dylan Rhodes who is working for the group of magicians known as the Horsemen. They are scattered and in hiding but soon have a new mission that turns out to be nowhere near as easy as they imagined especially as a new antagonist is prone to playing a similar kind of trick on them. Walter Mabry is played by Daniel Radcliffe though thankfully the narrative declines to acknowledge the actor’s previous involvement with a different sort of magic. As the plot builds a cat and mouse game unfolds reaching a climax in London on New Year’s Eve.
Obviously the risk of this kind of movie is that is simply becomes too clever for its own good and the viewer gets left behind. While it is sometimes difficult to see what is at stake (it’s all businesses and distant money) and you find yourself trying to second guess the next trick, the joy of the production lies in its sense of fun. Whenever it threatens to get too clever, there’s a humorous moment or a fun aside that brings it back down.
New Horseman Lula played by Lizzy Caplan is a sparky addition to the cast adding an irreverence to proceedings while Jesse Eisenberg’s Daniel Atlas remains the sort of role the actor fits so well. Mark Ruffalo’s Rhodes is such a slippery character but the actor works hard to convey his humanity. There are plenty of surprises and the bold use of large locations peopled with hundreds of extras pays dividends. Woody Harrelson has fun too with a dual role including McKinney’s eccentric frizzy haired twin.
Inevitably it can’t quite match the freshness of the first film but there is much to enjoy in a film that has plenty of neat tricks to pull and has more to offer than exploding buildings and fights.
Posted by John Connors at 22:22