Looking through my 1986 Diary! 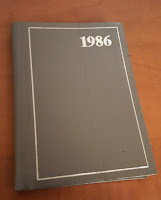 Oh my word 1986 was thirty years ago and I can remember it like it was last week. Or can I? To put this to the test I’ve unearthed my diary from that year - itself a relic from the days when people had diaries. Think of them as blogs that you wrote with a pen and which had- unless you were unlucky- one view. How did all this even start? As you do sometimes, I drift back in time. Not literally of course, that time machine is still in its box in the shed, but I mean in memory. Mostly this seems to be random; it’s amazing what you do or don’t remember almost as if your mind is filtering for you. Anyway the amount of actual tangible stuff I have from my past is fairly limited as I appear to have followed a persistent scorched earth policy when it comes to momentoes and the like. I will clearly never have any valuable antiques. Yet the weird thing is that when you come across something from the past it looks different from what you remember. For a number of years my polling station was my old primary school. The voting booths were in the main hall and they fair filled it up, this supposed hall. There it was with about four polling booths, the polling clerk’s tables and it was full and I thought `we used to get the whole school in here!` How did we do that?


Course, we were small and needed less room but that’s the boring answer. Perhaps the real reason is something to do with folded light? Anyhow here I am about to open my 1986 diary with its anonymous grey cover and silver border. It was bought from WH Smiths, which is still going! Reading all this stuff - in a couple of cases life changing events - penned in little sentences as if I was writing `Walk the dog, buy milk` or something is remarkable. Just these small diary entries trigger all sorts of responses. Yet I can’t stop reading it. Like a book I travel through the whole year from the fact that by the 4 January I was literally travelling somewhere else to meet friends. That month there was heavy snow, my boss was sacked, I saw Mel Smith and Griff Rhys Jones perform at the Royal Court, I had a meal with David Saunders and Matthew Waterhouse, I saw the Adrian Mole musical, I went to two local group meetings and went out drinking on 12 separate nights in three different cities. That was just January.
I should explain that at this time I was helping run the Doctor Who Appreciation Society (or DWAS) but will try and keep references to that to a minimum. I was also working full time but not earning a lot. So how, you ask, was I able to go out or away so often? The answer is that I had generous friends. Or I was stingy. February came next (that hasn’t changed either) and amongst it this month was seeing my mate’s band Absaloot play live. Twice this month. Here’s a thing; when you know someone who’s in a band or writes songs there is an unspoken obligation to go and see them perform at least five times. Five is about as long as you can reasonably be expected to be loyal. It doesn’t matter if their speciality is Greek death metal ska, you still go. Abasloot incidentally were synth based and wrote some good tunes. Another of my friends, Alec, was living in Africa at the time. We corresponded and it was interesting to read his viewpoint on events at home and his horrifying tales of poisoned water over there. He brought me back a carving which I still have to this day. I’m not sure that it should but it makes me feel secure, this carving. 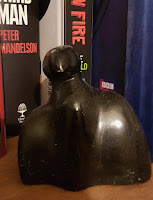 March saw me back in London and at the Fitzroy Tavern. This was / is a pub where Doctor Who fans would meet on the first Thursday of each month to chant “Kroll! Kroll! Kroll!” Just kidding, it was to drink and make fun of each other. Tavern nights were great back then; I recall one time having three separate drinks on the go as I moved between three different groups. Secretly though this was a way of keeping in touch with people but also not drinking too much as each pint lasted ages. I saw Rowan Atkinson too. Not at the Fitzroy but on tour and he did a lot of Not the Nine o’Clock News stuff. This was also – and I can’t believe I put this in- the month of the infamous newspaper headline `Freddie Starr ate my hamster!” 13 March in fact. I went to Nottingham this month as well to visit their local group. I did this from time to time, visited local groups as that was my area of responsibility in the DWAS though how responsibly I carried it out I wouldn’t like to say! I doubt if these trips had the same sensible behaviour as when the Pope called round in his Popemobile. Anyhow the Notts bunch were crazy mad lovely people and I was in a pub called the Owd Boots it says. And I drank whisky and lost my voice for about an hour.
Best move on to April which saw me back in both London and Nottingham. Should mention that the latter’s local group organiser Nick Pegg has become my assistant in the DWAS to produce a sort of newsletter thingy despatched to organisers so I was there often. In those days I didn’t even own a typewriter so any typing had to be done by someone else. So I sort of discovered Nick Pegg for which I’m sure both David Bowie and the Daleks were grateful though I'm absolutely sure he would have been discovered anyway! Another weird pub name pops up here- the Queen’s Head and Artichoke. 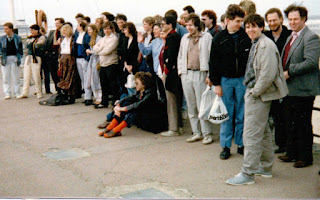 May. What can I say about May? Well there was our local group convention called MonsterCon with an army of guests including Debbie Watling, Carole Anne Ford and William Russell to name three of many. I recall William Russell meandering around the hotel trying to find out the football results because there was a Cup Final on. He was just like an older Ian Chesterton but less sarcastic. A week later it was the annual Blackpool gathering which shall remain censored because, as we know, what happens in Blackpool stays in Blackpool. It was always a glorious weekend, kind of like the Tavern on acid.  You can't see me but I am on this photo of us all somewhere at the far end. Seasonal weather of course as you can see.
In June I saw Elvis Presley. Well I saw a play called Are You Lonesome Tonight? which starred Martin Shaw (yes, TV's Judge John Deed) as the King aka Elvis. I do remember that Michael Keating was in it too. This month saw a DWAS Event called Early Days but all anyone can recall about it is the stifling heat. It was a mega hot day like today in fact and we were in an airless building and we all sweated like pigs- you can see the photo of us barely alive. I’m with John Ryan to my right and Neil Hutchings opposite. 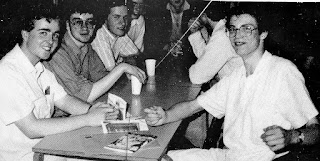 Which brings me to July 1986 where I spent six days in Nottingham (told you they were lovely people). Nick’s parents had a large house in which they generously agreed to put several of us up. It was located in a quiet village a few miles outside the city. It was an idyllic place to spend what remains one of the favourite weeks of my life. Not that there wasn’t partying especially at a club called Easy Street and I'm sure, though there's no reference to it in the diary, that the colours of our clothes were bright. I do recall Nick owned a stripy green suit once described as "looking like a packet of Mint Imperials!"
August saw news that DWAS co-ordinator Tony Jordan was resigning and a rumour I was going to replace him. Ha! I didn't start that rumour btw.  I should mention that for the past 18 months or so we had been waiting for actual Doctor Who to come back after it's axing by Michael Grade. Come September the hiatus, as it came to be known, was over and at the PanoptiCon convention we sat down to watch it. 700 of us with fevered anticipation, balloons and party poppers. The first ten seconds were amazing! The remaining 24 minutes and 50 seconds were not so amazing. I recall some of us went up to Marble Arch station the following day to digest rumours the episode had been watched by 10 million people which it turned out it hadn’t. Later that month I went to Aldbourne where the Doctor Who story `The Daemons` was filmed to try and raise Azal again. This is a pilgrimage many fans have made over the years and it’s amazing how little the place had changed in 1986 though at that time of course only about 15 years had passed. I went there from Leicester in a minibus and we also went through some of the locations for `Mawdryn Undead`. It was my birthday and I got a bettong, sort of. It’s an animal that seemed to Nick and I like the most ridiculous but under promoted animal in the world so I adopted one for a year. I wonder what happened to it? Last I heard it was a cultural ambassador at the UN! This particular week ended back in Liverpool watching the film Aliens.
Bizarrely October seems to have little in it which is probably a good thing for my wallet and my fingers right now typing all this! In November there was another Merseyside convention MonsterCon 2. Who organises two events in a year? Not me actually, but the Merseyside local group. It was held at the Adelphi Hotel later to be made famous in a tv documentary. Faded grandeur is the best way to describe the place where some bizarre things happened. Someone even tried to flush a handbag down the toilet. The thing about both these events was that there were people in monster costumes lurching about which also helped with publicity. December was Xmas and Colin Baker was sacked. Not sure these two can be related can they? I did go to the Crimbo Tavern and when I got home there was a bus strike. Of all the stuff in this diary and indeed mentioned in this post, the most embarrasing item has to be that on 30 December I went to see Marillion.
So that was just a flavour of 1986. The diary is meticulous if brief. And all of it, the good and the bad – and there was bad- is there written down in this diary. This is nostalgia and it is a powerful tool. I wonder what to do with the diary anyway. I could chuck it in the bin but then again I can’t. Perhaps I should put it back where it was. Reading it though has been a revelation and shows that time travel is Ok in small portions I suppose. And that 1986 was a good year.