If you had to name one item of food without which the entire Western world would collapse into complete anarchy and chaos then it would have to be chips. Without chips the community would stutter and stop. Health experts are usually right, if a little prone to panicky outbursts, but they are wrong about chips being unhealthy. They are (as long as you don't cook them in a vat of oil) full of vitamins and energy and they are good for you. Granted, too many chips are not good for you but that is true of anything. Even broccoli. What is important though is what sort of chips you are served. There are a lot of variations on the form, including soggy, dry, fat, thin or crinkled. There are oven chips, straight chips; in fact it's reckoned there are at least sixteen different varieties. Scallops are nearly chips and would be more popular if they were called Nearly Chips. Then there's the salt and vinegar equation. Salt? Vinegar? Both? Neither? A dilemma and a half. 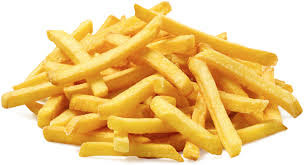 Many of course make chips at home but if you go to a chip shop there is the question of what wrappings they use. Newspapers are rarely seen wrapping up chips these days which is a shame because your meal used to be both delicious and informative. However it is essential the vendor uses a sheet first rather than just places them in the white paper otherwise they'll be too greasy for words.


If you're not in a rush, choose a chip shop were you can eat your catch inside because it can all be a bit problematical outside. If it's raining, the fish might re-animate with all that water. If it's sunny, pigeons will steal your chips.
Once I was sitting scoffing some chips and a pigeon started marching up and down in front of me. This was not just a bird meandering about but a bird with a very definite purpose in mind and that was to have chips. It wasn't going to pay of them, oh no. It was assuming I was going to give him some chips.  It kept cocking its head sideways to see if I'd dropped any on the pavement. It did everything but stand there tapping its foot and tutting. When I'd finished, I dangled the wrapper over the edge of the seat for a few moments - only to drop it out of reach into the waste paper basket. We both learnt something that day - I discovered that pigeons can't swear and he realised that a little stealthy, cunning and nonchalance is needed. I felt guilty afterwards till it occurred to me how overweight my feathered interloper was.  It needed a croissant rather than any more chips. 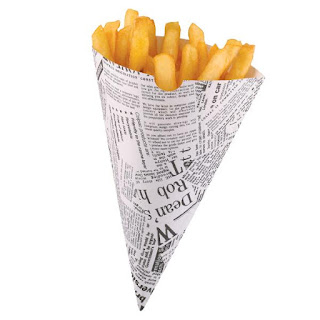 The real criminals of the modern chip age though are french fries. These are like chips and some people even think they are chips but they are not. Indeed there are some which taste as if no potato was involved in thier creation. A lot of fast food outlets serve them because they only use up one potato a day or something. French fries taste of nothing at all and certainly not potato. Why do you think they lash so many funny condiments on fast food? It is because it has no taste without them and you'd need a barrel of ketchup to get some flavour out of french fries. Next time you're hungry, get some chips and share them only with a respectful, slim pigeon. And give the fast food outlet a miss.