One off anniversary special on Channel Four.
TFI Friday conjures up a particular time when it was at the vanguard of a push back towards what became known as Dadrock. Bands like Ocean Colour Scene, Reef and others we’ve probably forgotten would be the musical guests and in many ways this coloured people’s attitude to the show. What TFI was really about was a sort of controlled anarchy. Rehearsed chaos if you will. Looking back its controversies seem trivial- some swearing, making fun of people that sort of thing. It was because it was broadcast at from 6pm that these things upset some though it’s also fair to say host Chris Evans was the target of some ire In those days. Nearly 20 years on much has changed. TFI seems tame compared to some of the outrageous tv we’ve been served since while Evans himself is an establishment figure. Could it still work in 2015? Well yesterday evening on Channel Four we found out.

Promisingly there was no Dadrock to be seen with smart musical choices being more eclectic than the show’s history would have you believe spanning relative newcomers Years and Years, reliable Rudimental and representing the 1990s Blur and Liam Gallagher. There seems to be a missed opportunity here as Damon Albarn has a throat infection so they get Graham Coxon to sing `Coffee and Tv`. If they’d wanted a real exclusive they could have asked Liam! Instead old grouchy has to belt out `My Generation` with Roger Daltrey and try very hard not to smile.
The old TFI studio is faithfully reproduced though Evans’ new presenter’s desk lacks the scratches and graffiti of the old one. The audience were if anything louder than in the old days with a generous sprinkling of star names about. This allowed for a great bit in which the sort of names other chat shows would spend fifteen minutes on were wheeled in and out in about 15 seconds. These include Stephen Marchant, Rita Ora, Ricky Wilson and Nick Grimshaw.
Amongst those present were several grown up versions of kids who used to volunteer for the Freak or Unique feature which often revolved around grotesquely unwatchable bodily contortions. Wiiiiil is there too, seemingly un-aged in 20 years. He’s the producer and people point at him, I was never sure why. Even It’s Your Letters was back which does really date the series when you think there was no email or smartphone in general usage back then. People wrote into the show on paper! Imagine.
What has altered is Evans’ ability to spin a good interview. Throughout the show he barely asks a decent question especially when it gets to the rather overlong session with Lewis Hamilton near the end. Incidentally why does Lewis Hamilton gets a large slot when everyone else is on and off so quickly? He seems to know nothing that is not related to motor racing which is the deadly dullest sport ever. 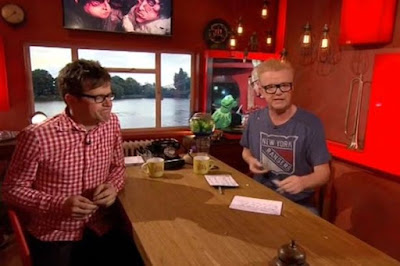 One thing that hasn’t changed though- and if anything is more intense- is the presence of the audience. Because the main area is a bar- or at least an imitation of one- the assembled throng are not entirely sober which adds much to TFI’s appeal especially if its celebrities making idiots of themselves. This is more apparent at the start when a large fan is switched on and bags of feathers thrown into it; the crowd love it though if it happened anywhere else they definitely would not.
About halfway through you start to sense that this Special is partly an attempt to atone for past misdemeanors. Chris Evans frequently apologises to old guests or to viewers and when Shaun Ryder, whose sweary appearances caused the original show to be broadcast with a delay turns up and doesn’t swear the viewer might feel short changed. And as the end approaches so the show continues past its scheduled wrap up in a miasma of blokey car related stuff plus Evans’ mum in a mobility scooter.
It’s all messy and bitty but yet I watched it from start to finish. Perhaps this is what TFI Friday is about; always keeping you waiting in the hope that something interesting will happen yet it never quite does.