The Black Tower
This penultimate episode is all grayed out vistas, twisted trees and tar black birds swarming. Atmospheric and odd it’s unlikely fare for a Sunday evening but those who’ve made the journey so far will surely be satisfied with the destination. In many ways `The Black Tower` simplifies the story drawing the strands together towards a conflict between old magic and Norrell’s supposed enlightened version. As Strange discovers the essence of madness and invites it into his head and enters Lost Hope to rescue his wife, Norrell resorts to making every copy of his former pupil’s book literally disappear. Strange’s invasion results in the Gentleman trapping him in a sort of column of doomy black smoke in Venice. There is a sense that the story is off the leash and heading for quite a climax though some may find all the rolling eyes and shouting contained in this episode less terrifying than intended. 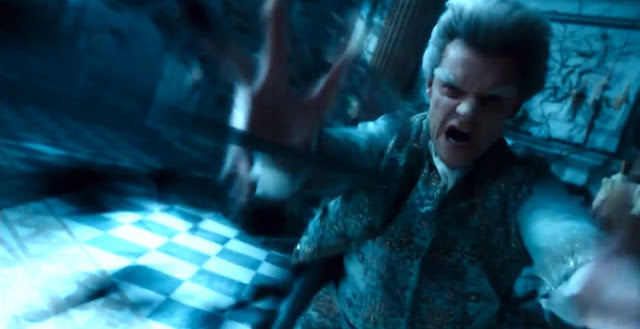 Strange’s descent into dark certainly involves some scenery chewing but Bertie Carvel and director Toby Haynes boldly embrace the scenario making it at times resemble the climax of one of those apocalyptic films. Visually the results are arresting with some excellent effects belying the series’ small screen budget. The emergence of hundreds of ravens from inside mirrors is a particular tour de force. Yet it is as much in the telling that the story continues to reward with several key characters coming into play this week.
Drawlight for example, forgotten languishing wigless in his prison cell, is back for more subservient activity, employed first by Norrell to spy on Strange, then by the latter to relay crucial items on a promise of being saved later. Vincent Franklin’s enjoyable crawling performance is a welcome human dimension amongst the more powerful surrounding characters. Babbling Vinculus turns out to be the Book of the Raven King; the text being inked into his skin from birth. Paul Kaye being Paul Kaye this is relayed with his usual made eyed glare but it is an effective role nonetheless. With all that’s going on around him for once his performance does not seem too over the top. Marc Warren continues to put and preen as the mysterious Gentleman but some weakness is exposed this week. And Stephen Black appears to be a pivotal character in the coming of the Raven King.  Ariyon Bakare’s understated performances have been impressive and during this episode we wonder whether or not he is actually the Raven King?
One of the things we’ve not been privy to throughout the series is what Norrell is really thinking. If we had assumed his self appointed custodianship of English magic was egotistical there are hints in this episode that he really does care and may have everyone’s best interests at heart to some extent. Though he has by far the less showy role of the title characters, Eddie Marsan’s calm tones and worried looks work so well here so as to leave us still unsure what to make of him. The result is an episode that while powerful in its own right also suggests an even better climax to come.