All The Mirrors of the World
With overnight ratings of just 1.78m it would be wrong to describe this series as a hit though one suspects its charms may spread by word of mouth over the coming years. At some point in the future people may re-discover it and perhaps the creative climate of that time will be better disposed. In the meantime those who have dropped out are unlikely to be drawn back by a plot that grows denser each episode. In this fourth installment the differences in outlook between the two principal characters are brought into sharp relief both by the travails of Lady Pole and Strange’s own wartime experiences “on the Peninsula” which he never stops mentioning. It’s an episode that builds on both lead actors’ ability to convey conviction. 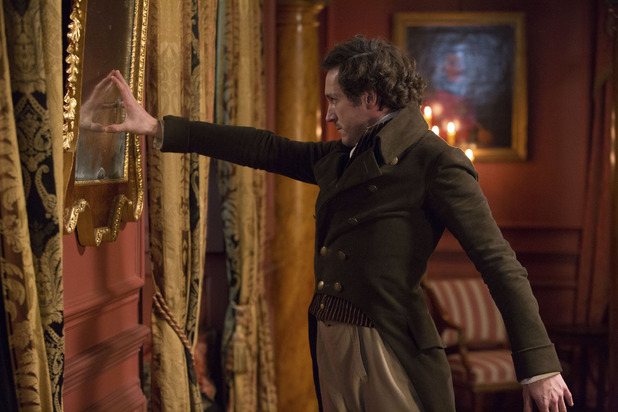 Norrell’s increasing frustration with Strange’s wilder approach to magic is tempered by his seeming need to share his custodianship of English magic with someone else. Strange, too, has conflicted thoughts- he talks of going home and settling down to family life, even becoming simply a theoretical magician. Yet once he steps inside a mirror discovering the mythical Kings Roads – a pathway between worlds- is accessible he is drawn to darker, older magic.
This push and pull is at the core of the episode and both Eddie Marsan and Bertie Carvel excel in conveying it. There’s a wonderfully English scene where the two sit in armchairs in front of china tea cups to debate their different positions. Marson’s droll delivery of Norrell’s sense of responsibility is contrasted by Carvel’s lively interpretation of Strange’s enthusiasm for what he’s found.
The problem the series might have- and perhaps why so many have switched off- is that it is difficult for the viewer to empathise with either side. Though Norrell is self- important he phrases everything with such delicate reason that you can hardly disagree. Strange is a more likeable character but of course he is courting with danger by exploring old magic. Norrell speaks to Strange like a parent to a wayward child, Strange is like a rebellious teenager. The narrative does try to offset this by way of Strange’s wife Arabella whose very human concerns- both for her husband and for her friend Lady Pole- add an emotional level but with Norrell there is no sense of his life outside magic if indeed there is one. On the other hand when Strange publishes a scathing review of Norrell’s book it seems their working relationship is teetering on the brink. Scenes the two lead actors share are engrossing and you could watch them all day.
Perhaps a more identifiable element to this episode is how Strange encounters echoes of his fame. While initially portrayed as a humorous character thanks to Vincent Franklin’s expansive approach, Drawlight has turned out to be a desperate man paying off debts.  His work for both magicians has been rather like a publicity agent but to his own advantage as well. His false claims about Strange’s actions lead to an amusing scene where the latter is confronted with someone who claims to have been mentored by him. How useful to be able to step into a mirror rather than catch a bus or cab!
Norrell’s recurring mantra that “magic cannot cure madness” comes to the fore this week as well with the duo assigned to try and cure mad King George who we find with a frightfully overgrown hairdo sitting at a piano. Strange’s wish to persevere with the situation again puts him at odds with Norrell.
It seems as if he’s not the only person attempting to disprove Norrell’s assertion as John Segundas ends up looking after Lady Pole whose actions last week trying to kill Norrell have had her certified.
Strange’s sojourn into the Kings Roads is visually interesting and seems to continue the theme of imagery involving ravens and trees. These trips to this other world provide the series’ richest vistas like paintings come to life.
In the end however many civilised disagreements they’ve had, Strange and Norrell appear to have reached a parting of the ways with Norrell viewing his now former apprentice as an enemy who must be discredited.

Email ThisBlogThis!Share to TwitterShare to FacebookShare to Pinterest
Labels: All The Mirrors of the World, Bertie Carvel, Eddie Marsan, Jonathan Strange and Mr Norrell BBC, TV