BBC documentary goes behind the scenes at KFC.
You’d be hard pressed to imagine it is possible to accumulate three hour’s worth of interesting material on the running of the major fast food business KFC without considerable repetition and you’d be right. What would have been an interesting two part or even single documentary is stretched too thinly across three weeks resulting in an unfocussed programme containing a lot of tiny detail but lacking much wider perspective. There are some funny moments and interesting characters but this food is definitely not fast.  There is also the odd habit of flashing up short sequences of thousands of live chickens waddling around a huge barn every so often as if subliminally reminding us that many chickens were harmed during the making of this production! 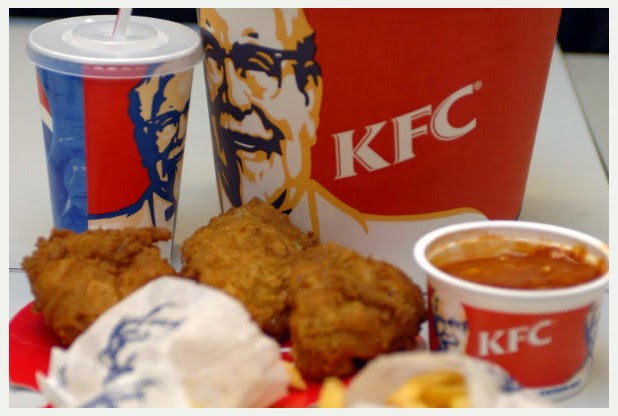 We do learn that figurehead Colonel Sanders was real; there’s even some footage of him looking as if he is straight out of the American Civil War. We discover that the headquarters has rooms with funny names and employees have to test new ranges and compare different types of cheese. We see the rather arbitrary recruitment process which seems to rely more on personality than ability even requesting potential employees to create a rap about the company. Not a wrap, a rap. We meet people at the customer facing level of the company who’s often less than enthusiastic tales seem to counter management talk of opportunity and advancement. More than anything the cameras linger in various branches to view the tedium of slow days and the pressure of busy ones.
The more interesting aspects of the series show an internal inspector whose powers are sweeping yet whose demeanour is smiley and calm. He routinely grades branches and if they score under a certain percentage they are officially in “breakdown” which means they are as much in danger as someone in the bottom two of The X Factor. If they fail again the store will be closed and its employees thrown into the fryer. Well sort of.
One thing the documentary does do is reassure anyone whose eaten in KFC that the food is fresh and as healthy as anything fried can be. Every aspect of the process is measured from the warmth of the chicken, the amount of minutes it’s been sitting in preparation and especially how much is thrown away. Part one’s big revelation centres on this waste which amounts to a sizeable daily amount abandoned just because it’s been cooked for more than a set number of minutes without being bought, a wasteful process that is the result of the public’s demand for faster food. . There is nothing wrong with this abandoned food but we see the piles and piles sitting at the back. One enterprising branch decides to donate theirs to charity but in a telling piece of security camera footage we see people scavenging in the bins at the back for this food, an indictment of the country politicians might care to watch at the moment.
The big centrepiece of the third episode is a new range of pulled chicken. The woman who runs the company’s huge distribution warehouse wonders aloud exactly what many viewers are thinking; just what  `pulled ` implies and it turns out it’s strips of meat taken off the bone and then cooked in an oven rather than fried. As the F in KFC stands for `fried` this is a radical step. We see a Glasgow branch piloting it with staff trailing around the streets trying to sell this concept to people whose prior knowledge of and enthusiasm for pulled meat is non- existent. Yet it soon takes off when word gets round and by the end it’s outselling the fried stuff. Perhaps one day there’ll be a name change to KPC.
It’s not all positive spin though, with plenty of time given to local opposition to a new KFC though this is so polite it would even be too nice for one of those Sunday evening serials. The objection seems to amount to the look of the place and the sort of people it might attract rather than a particular dislike of chicken. It’s easy to mock of course but would you like a KFC adjacent to where you live?
The series is overlong and less interesting than it could be but it does unearth a few nuggets and at least confirms that the food you might get from KFC is freshly made. Nobody mentions how messy a KFC meal is though. Perhaps some matters are just too sensitive for public consumption.