Yikes, it’s the Sixties in microcosm! The opening sequence of this unusual episode features that jaunty music and those dolly birds plus bold colours that are mandatory in every Swinging Sixties drama. Except it’s supposed to be 1970 so it must have seemed just as surreal to viewers then. These gaudily attired gals procure sweets to two City gents as writer Dom Shaw’s look at advertising begins. As with a number of episodes there is something of the now about The Devil’s Sweets while at the same time it sits rather comfortably in it’s period setting too.

Doomwatch is apparently having a lean time of it with the usual viruses and melting plastic so the team has been temporarily seconded to the Ministry of Health to investigate smoking. It seems unlikely that such a highly trained group would be employed to what is essentially basic research but Quist is on it like a Ninja ordering everyone about as usual. The narrative features quite a lot of the put upon secretary and `factotum` as she describes herself Pat Hunnicutt. Seems there is a brand of cigarettes called Chequerboard that has bucked the downward sales trend in London by increasing its sales by nearly 50%, all of them women. Quist wants to know why, though John Ridge looks like he’d rather be watching paint dry. What follows may test the patience because only the least attentive viewer will have realised what’s happening but of course Quist needs evidence.
Cue Ridge doing one of his surprisingly easy espionage missions and a lot of questioning of the university researcher and ad agency guy involved. Which of them is the real villain? That is left shrouded from view till the end. Shaw’s script also includes some observations of then current thinking on smoking which seems to have started on the now very familiar path we walk down these days.
The trouble is that in its attempt to be realistic the episode dallies in too many scenes of research exercises and positioning phone calls, stuff that gets edited out of modern dramas. Nonetheless it does prove John Paul is rather a good `on the phone` actor. Several times the camera lingers on him pretending to talk to someone on the phone, a skill that is probably harder than you or I imagine. Ultimately this attempt to sacrifice melodrama for verisimilitude does make matters drag a bit and all of the fun really is in the first few minutes.
Presumably Don Shaw was fostering a dislike of advertising when he penned this but the narrative tilts more towards scientists as it goes along.  Pat is subject to a lot of tests and complains of a headache- working with Quist and co you’d imagine that was an occupational hazard. However when she ends up in intensive care the risk is ramped up giving the episode a hard edged ending you don’t expect.
This seems to be a trait of Don Shaw as his previous episode also shows - 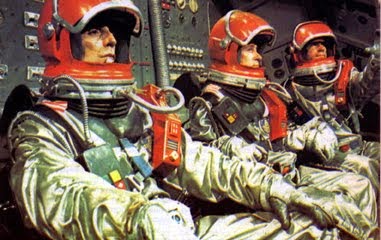 Re-Entry Forbidden sees an English astronaut on a pioneering nuclear powered American space mission is at the centre of Don Shaw’s psychologically themed episode which starts where a lot of other shows would end with a re-entry crisis. Rather than drag this out too long the narrative soon moves to the more intellectual question of what caused a near crash the effects of which could have been catastrophic. Was it something as technical as a malfunctioning warning light or was it something as difficult to spot as a mental issue involving the astronaut? Over much of the episode we are kept waiting to discover the truth.
Seeing as this was made in 1969 space travel would be on everyone’s minds and it’s certainly the case that Doomwatch lives up to its title by offering something other than a celebratory take on the subject. Instead Shaw’s script examines whether someone could pass rigorous tests yet still end up manning a spacecraft with some undiagnosed mental condition. Of course you do wonder whether something like paranoia could really escape the gimlet eye of NASA testing and having learned that Dr Quist knew the pilot as a student you wonder how come he didn’t spot something like this? Even so the tension which the episode brings works well enough to over-ride this anomaly.
In fact not a lot actually happens, we watch the pilot Dick Larch (though the poor sound quality of the recording makes it sound like a more unfortunate name) as he endures tests, gets tetchy with wife Carol and doesn’t take kindly to Quist trying to ask too many questions. You wonder where it is all leading and there are times when it doesn’t seem to be leading anywhere much at all flitting between serious conversations and people watching screens. On the other hand it is refreshing that no need is seen to introduce some livelier sub plot involving some stolen item or a car chase just to keep our attention.  See this episode through and you’re rewarded with a shocking last five minutes.
There is an attention to detail as well to help sell the plot even extending to the involvement of the BBC’s real life science guru James Burke, at the time one of the best known television faces as well as an appearance by Michael Aspel. Mostly though it’s small things that make a big impact; a light, a coat, Larch’s reactions and most of all those then very familiar mission control type screens.