Though Doomwatch is a well known marker in the road of much praised series it hasn’t had the same exposure as some others hence its reputation is more received wisdom than fact. With some episodes wiped and the remaining ones never released on DVD or shown anywhere in a long time this reputation has been fostered by a small band of loyal followers. Now over 45 years old the series is long overdue a re-assessment so that’s what this series of posts is doing. After all at the time it was a big enough deal to get a stunning Radio Times cover (below). Don’t ask where we got the episodes from, we’ll just obviously say John Ridge got them for us. Doomwatch then is an organisation whose remit is to investigate technological issues that could be a threat to mankind. Nowadays it would be called the green agenda but the series deals with all branches of science and beyond. 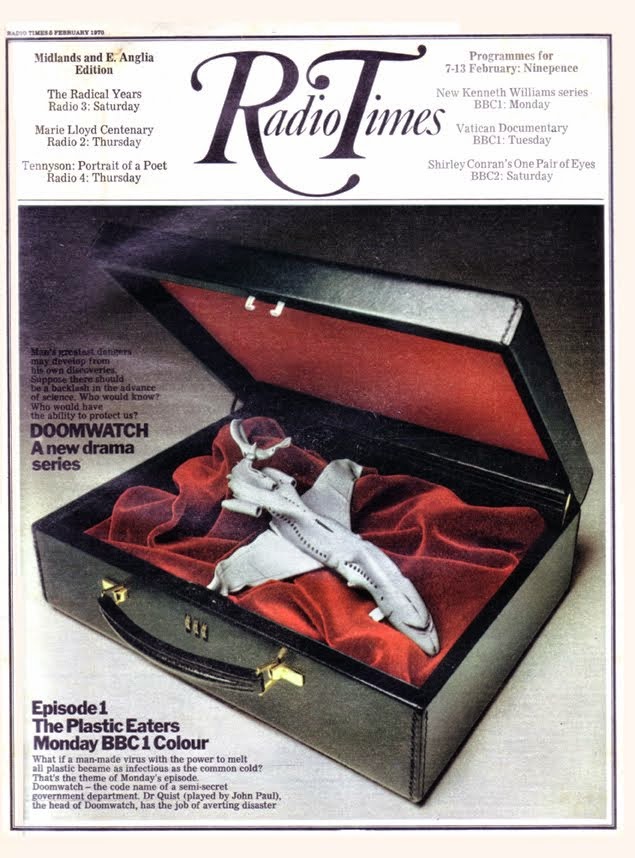 Heading up the team is Nobel prize winner Spencer Quist whose own past work seems to have shaped his views as a scene in this episode suggests. John Ridge is a former espionage agent who is called upon to do the field work here, breaking into a minster’s office and later a research centre. The latter sequence incidentally is one of the occasions when the series shows it’s age as the simple act of getting through one wire fence is enough and not one security camera is seen. Furthermore when his identity is suspected he’s left alone in a top secret lab while someone checks! There’s also the Sixties all purpose computer which is one of those enormous things with revolving discs and a loud engine. Like a lot of programmes at the time it’s used to extract whatever information the plot requires presumably being one of the first to have Google installed. However these are small niggles in an otherwise tight plot that keeps turning this way and that to maintain interest.
This episode is the scene setting opener of the series, first shown in 1970, and concerning a plastic eating virus that has somehow got out of the laboratory and seemingly caused a plane crash. Any doubts that this might be too earnest and studio bound a venture fly out of the window in the first ten minutes. The episode is razor sharp, packed with dialogue spoken at approaching the speed which those old 1940s films used to reach. You’ll be surprised perhaps to discover it is the work of Kit Pedlar and Gerry Davis whose forays into Doctor Who were noted more for their ideas than conversations. Yet this script is sparkling and direct with a loquaciousness you rarely find in modern tv. It’s an attention grabber right away. The second thing it has going for it is a certain devilish delight in the subject so we are treated to shots of bits of an in -flight aircraft melting over passenger’s heads or leaving a squelchy mess on the floor. I’d imagine if you had a flight booked back in 1970 and saw this you’d be thinking of cancelling. This quasi realism brings a tension to the final section in which Toby is stuck on a disintegrating plane as it tries to land.

The third asset that springs to the fore are some of the characters. The episode is populated by the kind of actor who always makes an impression even if we may associate them with a signature role. Here, the government Minister whose complicity in what occurs is superbly unpeeled is played by John Barron better known as CJ from the later Reginald Perrin series. He is within a hairs breadth of saying “I didn’t get where I am today by hiding the development of mutant plastic.” Equally voluble and pushing the programme’s main thrust is the formidable Spencer Quist something of a ringer for Jon Pertwee’s Doctor Who save for the fact he doesn’t wear velvet. With his older man’s quiff, brusque manner and insistent hectoring of government figures the comparison is clear though of course we should remember this was made around the same time as the third Doctor’s debut. Perhaps John and Jon got together in the BBC bar and made it their mission to talk down to everyone! Quist must have been fin to write as he cuts through waffle and gets to the point however senior an official he is challenging. The only character who doesn’t make much of an impression is Toby Wren who is left looking worried, perhaps because he is wearing an outrageous cravat. This is scarier than the melting plastic at times.
Clearly Messrs Pedlar and Davis felt passionately about such issues but were able to sculpt a drama out of what could easily be a scientific paper. How accurate the science is a matter for a scientist but the threat is sold to the viewer convincingly enough. With no incidental music it is the strength of both the dialogue and the choreography of key scenes that makes The Plastic Eaters a fascinating and absorbing production.
Posted by John Connors at 19:13