Episode 12: It’s time for Will, Henry and Beanpole to stand trial which means an array of more silly hats amongst the village dignitaries. White fezzes are one thing but one woman tops even the Mayor’s imitation cake with her amazing headpiece that includes two large leather flaps underneath her chin. What possible use- even in a dystopian future- could such a fashion have? One feels it is the village tailor who should be on trial for crimes against millinery. Anyway after the costume department have exceeded the boundaries of taste, the trial itself is shorter than all the walking in and parading about. Daniel, the guard who’s been following them for the last two episodes whisks them away in a cage. 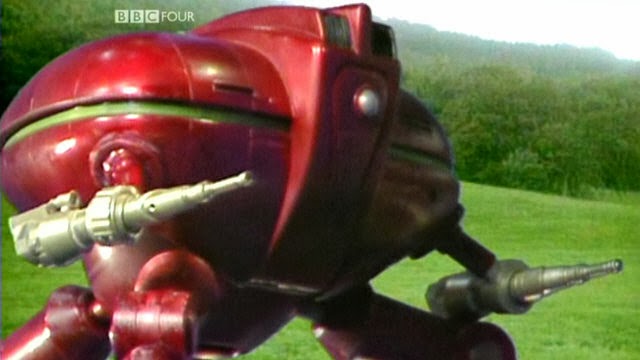 Their escape is as brutal as it is unexpected. The series has largely contained what is commonly referred to in the film industry as “mild peril” but this is a breakout episode in that respect. The boys decide to throttle Daniel with a belt, leave him to die, go joy riding in a stolen cart and topple a Tripod for good measure! All this particular Tripod is doing is standing about minding its own business but they show it no mercy. Whatever was in the village broth, it certainly seems to have turned our heroes into, well, heroes! Even Beanpole, normally the French voice of reason, is complicit in these acts though it is Henry who gets the job of scaling the rocks to set the trap.

The sequence does reveal that they’ve been carrying grenades ever since Paris so could have used them on the hat loving villagers. Or indeed the jabbering wood dwellers last week. The Tripod attack tests the special effects people whose work has thus far been used relatively sparingly. While there is no escaping the difference in size between the prop foot and the supposedly full height affair, clever editing, direction and music makes it suitably tense. And who doesn’t experience a tinge of excitement when the scene cuts to a number of other Tripods all making their way to the scene. Some of them are even red which either means they have a hierarchy or else they’ve been using too much wine. It’s a climax that befits the penultimate episode of the season and the boys’ shock is as nothing compared to ours as we realise the series is actually getting good!

Episode 13: If last week’s episode suggested some sort of action packed finale it doesn’t come to pass. There is one brief well staged scene where the trio are pinned down by Tripod fire in the middle of the night but after that matters take a less exciting turn. With the White Mountains in sight, the boys are captured by what appear to be outlaws loyal to the Tripods and interrogated for ages recounting their adventures so far which they make sound a tad more exciting than they were. Turns out the inquisitors are actually the Freemen and the interrogation a ruse to force the trio to reveal their true intent lest they be secret agents sent by the Tripods.  Clearly written as some sort of intense psychological process, the filmed result is scrappy and exposes the actors’ limitations though Peter Halliday relishes his role as the interrogator.

Matters conclude with a rousing speech by the Freemen’s leader that inspires Will, Henry and Beanpole to volunteer to be taken by the Tripods (having spent 13 episodes running away from them!) provided they can win another tournament thereby gaining entry to the City of Gold in which our antagonists live. Cheekily, there is a model of the city which the Freemen have made which you just know will be what will be actually used to portray it via computer effects next season!

The episode just manages to generate enough interest for anyone to check out the second season but lacks the sort of thrills a finale might reasonably be expected to have. Like much of the season it awkwardly translates what would probably seem much more dynamic on paper and suggests a more expensive, edited film would be a far better way to portray this story. The three leads are likeable enough but too often seem almost casual about their epic journey and their inexperience shows whenever they are called upon to display emotions. They are hardly helped by the volumes of expositional and observational dialogue they are required to speak. As a result the viewer is detached from the drama for long stretches. Visually it looks better than you might expect and clearly has a comparatively large budget but that alone is not enough to cover for the lack of a heart in what remains a clinical rather than inspired adaptation. On the other hand, there are some incredible hats!