Episode 3: It starts with Black Guards stealing fruit to chuck at Will and his non speaking fellow prisoner in the pit. At this rate the town’s green grocers will soon be broke. Of course, Beanpole just rescues Will from the pit in his usual useful way and they are chased through the town but the boat has already left. You’d expect Beanpole to build a boat but in something of a remarkable shift, the boys end up was waiters as the wedding of the mayor’s daughter serving chips to some of the people who were probably trying to stone them hours earlier. Disappointingly the headgear in this town is nowhere near as radical as previous ones though both Will and Beanpole end up sporting slightly ridiculous looking bibs. It makes you wonder what happened to the actual waiters who had presumably been booked for this function; are they locked up in a cupboard somewhere?


The action packed first half gradually gives way to the wedding banquet but there’s a sting in the tale when it turns out the Black Guard leader who’d been after them earlier arrives. Will’s reaction for some reason is to hide under the table, surely a more noticeable act than just leaving the room? Matters take on a farcical turn as he tries to escape his concealment. Another leap of faith is required when the boys are smuggled out of the do in the bride and groom’s luggage which probably means most of the happy couple’s clothes have been left in the hotel. All of this has been organised by two girls that Will and Beanpole happened to meet earlier hanging around the docks and who possess an air of desperation.

The owner of the venue who hires the boys is Pat from Eastenders and you’re just waiting for her to shout “Get out of my cheaper than it looks from the outside hotel” but she doesn’t. Instead she spends much of the episode giving them and us her life story in a mostly failed attempt to make us interested when we know full well we won’t see her again. There is no actual reason why she helps the boys, especially after she’s rabbited on about how her husband died defending the Tripods. It’s easy to forget the Tripods actually, there’s no sign of them this week hence the episode has a season one feel to it and it’s as much of a relief to us as it is to Beanpole and Will when the boat sails off at the end. 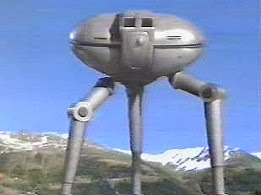 Episode 4:  It’s the games which as we know means tall hats and unconvincingly won sports events. If there were ever three people who look less likely to win them it’s our trio of Will, Beanpole and Fritz. However help is at hand in the form of director Christopher Barry who manages to shoot Will’s boxing convincingly enough to make you believe he could beat taller broader opponents and also facilitates Fritz’s sprint authentically enough.
Unfortunately for both Beanpole and us he sprains his ankle and thus misses out on the prize which means we will miss out on his French genius. He’s become a key enabler of the narrative and it’s odd that the least interesting of the initial trio ends up being the one who will enter the Tripod’s city. John Shackley is much improved this second season but Will is a bit of a blank character who doesn’t really inspire us to cheer him on. Mind you, he’s charismatic compared to Fritz who glowers constantly for no discernable reason; perhaps he didn’t bring his Weetabix with him.

Barry marshals an impressive number of extras giving the whole thing a scale you would never have got from other UK sci-fi in the early 1980s. There are sweeping camera moves that manage to convince us the medium sized sports stadium is full while the distance shots showing the city and Tripods stalking about are very impressive indeed. The sports are a little better than the school sports day feel of season one’s attempt.

After a pacy episode the winning contestants are hoisted in ungainly fashion into the Tripods above providing an exciting climax. As for Beanpole he’s left with the two girls. Maybe he didn’t really sprain his ankle after all..