Advertising has somehow inveigled its way into every aspect of our lives so it was inevitable that it would also creep into some of the less glamorous areas. Disposing of litter is about as far down the pecking order as you can get when it comes to something that can potentially be sexed up or made to look cool but you have to acknowledge that municipal authorities are doing their best. It’s just that the results of the latest two campaigns are either awful or impossible!

For some unknown reason people still smoke and nowadays unless they’re at home the smoking has to be done outside. If you walk past a bar first thing in the morning the pavement is often littered with cigarette stubs and there is now a campaign to encourage people to put these in a bin. Unfortunately it takes the approach of a mother instructing a two year old who can’t talk properly. The line for the campaign is: “Do The Stubby Outy BinnyThing”. Really. Can you imagine anything less likely to enforce our sense of civic duty than such a ridiculous, patronising phrase? `Binny Thing` is the worst bit because plainly nobody in the world- not even a two year old- says `Binny Thing`. If I were a smoker this phrase would encourage me to throw my stub on the groundy place.
A different approach is now being attempted regarding chewing gum. The rather stylish looking posters are a take on Apple’s famous iPod advert silhouettes and suggest different ways in which you can dispose of your gum in a litter bin. However these various suggestions would require gymnastic abilities far removed from the average citizen. They involve various contortions, twists and somersaults that it’s difficult to imagine anyone attempting. Besides, if you do put chewing gum in a litter bin you can just drop it in far more easily than trying  any of the Olympian shapes the posters suggest. Do these ads make the idea of putting litter in a bin cool? The silhouettes suggest young trendy types but let’s face it they are less likely to bother with chewing gum in the first place.

Anti-litter campaigns are historically more basic with simple symbols and short instructions such as “Bin It”, “Bin It, Don’t Sling It” and Suffolk’s wittier “Don’t be a Tosser”.  In the 1970s the prevailing campaign was positively polite; “Keep Britain Tidy “it said accompanied by a graphic of a man who seemed to be splitting apart in the middle. There was also the even more reasonable; “Take your litter home”. The entire thing suggested a kindly reminder rather than an order and probably got the message across far better than trying to make the process look in any way fashionable. 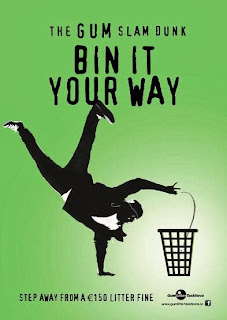 It makes you wonder what they could try next. One age old problem is paper litter, those wrappers and receipts that blow round town centres at night. Maybe we will be encouraged to fold these things in imaginative ways like making a paper glider and sending it whizzing into the bin. An alternative idea might be to make litter bins themselves easier on the eye. They could be pimped up in garish colours or perhaps coated in gold to draw people’s attention, surely better than them lurking in dark black. Perhaps one of those spinning coloured lights could be attached to the top of the bin?

Whatever advertising technique authorities attempt it will be difficult to over-ride people’s ingrained habit of dropping litter. Not that there isn’t a certain guilt involved. You see people opening a sandwich or packet and letting the wrapping fall to the pavement as if they haven’t even noticed it. So maybe there is a little part of us that knows we should bin it but it’s just easier to let it fall. So in all likelihood the advertising campaigns will go on and the only long term solution is to train an army of squirrels to pick up gum and litter and put it in the bins.