A musical about two soldiers returning home directed by Dexter Fletcher and based around songs by The Proclaimers sounds an unlikely fit but it works. Granted the story is often determined solely by navigating from one song to the next yet Sunshine on Leith has a heartfelt charm that keeps you interested and a good cast who make it believable enough. They don’t tell us what havering is though!! 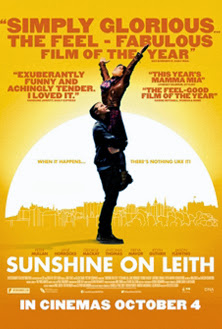 Soldiers Davy (George Mackay) and Ally (Kevin Guthrie) are back in Edinburgh after a tour of duty in an unnamed land (which actually looks suspiciously Scottish in hue) trying to pick up their lives. Davy meets English girl Yvonne (Antonia Thomas) - thankfully there is a minimum of anti English gags- and looks ready to settle down. Ally‘s relationship with Davy’s sister Liz (Freya Mavor) though is rockier because she dreams of broader horizons. Davy’s father Rab (Peter McMullen) has been married to Jean (Jane Horrocks) for 25 years but is harbouring a secret from his past that emerges during the film altering the generally happy go lucky atmosphere that prevails for the first half. It’s no spoiler however to say that it all turns out ok in the end.

Being a musical the emphasis is on moving from one song to another but this is an advantage because most people only know two Proclaimers songs so much of the soundtrack seems new. As the songs are mostly about relationships so it/s presumably easier to pen a script between them and they fit the musical genre. Surprisingly (or not I suppose if you are a Proclaimers fan) the songs often express their emotions far better than the dialogue which sometimes presents too neat a perspective.

However this does mean that some of the narrative’s possibilities are over looked. Both main characters’ thoughts about the conflict from which they have returned is only hinted at a couple of times and they settle back into civilian life a little too easily. Their angst comes instead almost exclusively from their respective relationships so the point of them having been soldiers seems superfluous.

As you might expect, there is strong work from both Peter Mullan and Jane Horrocks as Davy’s parents whose travails are in danger of becoming more interesting than those of their offspring. Horrocks in particular steals the film as she manages to draw far more than the script offers from her role. The younger cast acquit themselves well though especially Antonia Thomas.

Many of the surprises come from director Dexter Fletcher’s un-showy approach that allows the material to breathe. He imbues the musical numbers with interesting but also down to earth settings including some beautiful shots of the city. The results may soften the sharper edge of The Proclaimers’ original versions but stops well short of the camp likes of Mamma Mia. The Proclaimers material is re-worked to offer a variety of musical settings best realised in crowd numbers like `Let’s Get Married`, `Over and Done With` and a rousing take on `500 Miles`. Most affecting though is the perennial `Letter from America` which alters the original with a more tender take on distance and loneliness. Like much of Sunshine on Leith however unlikely it seems, it sort of works.