As the Mara is repelled by its own reflection it seems appropriate for it to appear in two stories which are mirror images of each other. On one side Kinda where bold direction masks a script and design that are both a little rough around the edges. On the other Snakedance, a story where the direction is less inspired but the script and design more polished. Two equal and opposite stories where strengths in one story seem to become weaknesses in the other. 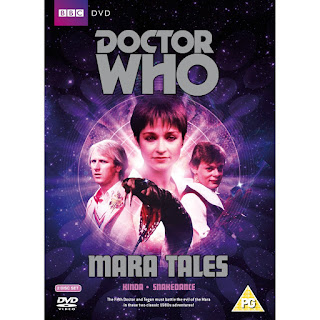 Take set design for example. Fundamentally there's nothing wrong with the sets Kinda uses -the ones for the dome interior are fine- but the jungle is famously studiobound and gives a theatrical feel to what should be exterior scenes. Fake looking studio exteriors are hardly an original sin for Kinda, there were plenty in Doctor Who before -and after- it was made,  but the production team seems to be aiming for Kinda's jungle to appear realistic which just makes the viewer wonder why they didn't take the crew off to Burnham Beeches for a couple of days or go for something more obviously alien. In contrast, Snakedance's planet Manussa, despite being a hotch-potch of other people’s sets, feels like a real place in a way that few stories can equal. Although it’s probably that mixing and matching of different styles which gives the world its depth. Taking it away from the uniformity of design which sometimes leave studio worlds like Logopolis looking like one of Star Trek’s planetary mono-cultures.
Lighting also plays a part in establishing the relative realism of the two worlds. Like a lot of 80s stories the lighting in Kinda is flat with nothing to really distinguish interior locations from those which are supposed to be outside. On Manussa however locations are lit differently -and changed subtly to suggest different times of day. Look at the moment when the Doctor steps out of the TARDIS for the first time, it's a short scene but great use is made of shadows falling on the TARDIS to give the impression of a hot, dusty world. And Part Three's prison scenes benefit massively from some interesting use of shadows and set design to give the room a sense of depth. Although this does mean the bog standard futuristic silver prison door disappoints more than usual because it jars so badly with the rest of the set.

One place where the lighting in Kinda is really effective is in the difference between the “real” world and the Mara's dark places of the inside (if I wanted to gain bonus psued points I'd probably claim that these are the only interior and exterior locations which need to visibly different for story purposes). Starkly illuminated from the side and electronically enhanced to look washed out these scenes have a unique atmosphere. And again, what works in one story is less effective in the other. Snakedance spends much less time in the Mara's dimension, just a short scene at the beginning of Part One, but Fiona Cumming gives us a considerably less interesting (but probably simpler to achieve) shot of Janet Fielding standing in front of a black background.

On the whole Fiona Cumming's direction of Snakedance is less exciting than anything Peter Grimwade gives us in Kinda. Grimwade mainly brings pace and excitement to a script more interested in the people inside the dome than the Doctor but he also gives us memorable moments like the long zoom into Tegan's eye to show her journey inside her own mind. That's not to say that Fiona Cumming is a bad director, she just doesn't compare well to someone like Grimwade, her direction on Snakedance -as on Castrovalva, Enlightenment and Planet Of Fire- is more workmanlike and less stylish; although Snakedance does start off with a striking series of jump cuts towards Dojjen and his blue crystal.
The only aspect of production where neither story gains an advantage on the other is casting. It's excellent in Kinda and Snakedance, from the regulars, to the guest stars, right down to the smaller parts. In Kinda Simon Rouse takes first place as Hindle giving probably the scariest portrayal of madness in Doctor Who while in Snakedance Martin Clunes grabs most of the attention as the arrogant and bored Lon (and makes me wish someone had cast him as George Macdonald Frasier's Flashman, sadly it's too late now).
So two stories, equal and yet opposite. Both very good examples of Doctor Who but if you prefer one then it's most likely to be because of some aspect not handled quite as well in the other.

So which is better?