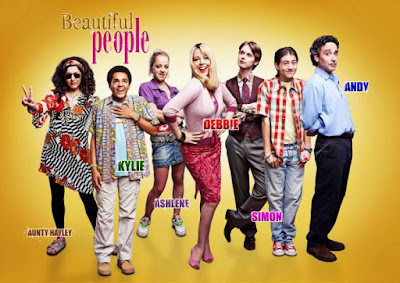 Everything about the series is one step beyond real, yet rooted in a familiar reality. Whether you get all the references or not, you’ll laugh anyway. See, the show is designed to appeal to a certain viewer but really it’s a broad comedic experience in the tradition of eccentric families from the likes of Arrested Development all the way to the excellent kids 1990s series Wild House and many other examples. Provided you don’t mind the campery (and so many people watch Glee now that we surely expect songs and sequins in every TV series!) you can luxuriate in it.

1997 Simon’s aim is simple enough- to move to London “and live amongst the beautiful people”. It’s implicit in the first series that he doesn’t know he’s gay yet but equally obvious he will be. His family indulge this behaviour; inevitably it gets him into difficulties at school.  In the first series Simon doesn’t seem to have quite joined the dots; Debbie frequently refers to him as “different” yet in the last episode it is clear she doesn’t believe him to be gay. It takes until the concluding episode of the second series for the subject to be even spoken out between them. Simon’s best friend Kylie – well his name is actually Kyle but only his mum calls him that- is even more pronounced and the two sashay thorough life with ambition, show tunes and fashion never far from their minds. Of course, like every teenager Simon doesn’t realise how good he has it in some respects. His camp behaviour is thriving in a family environment that fosters his outlook; indeed you could almost say he’s been brought up that way by his extravagantly garrulous peroxide mother Debbie Doonan (a tour de force from Olivia Colman) and quirkily ordinary father  Andy (Aidan McArdle, wry and understated). If the show were simply about Simon and Kylie it might be a little wearing but the fact is they are two of the more sensible characters in it! 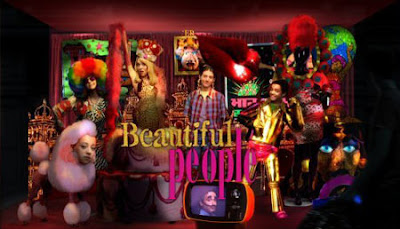 As we work out by episode one of course, but which is only relayed by voice over at the end of series two, Simon is already living with the `beautiful people`.  Here he is nurtured and relatively free- when he finally does go to London he finds it to be dull and grim. It’s notable how in the second series he is back from New York seemingly content to return to the place he sought so long to leave. Yet despite carrying this baggage the show never becomes sentimental or preachy about such issues.This is not about a kid struggling either with his sexuality or because of it, but a show about a kid who covets a lifestyle that seems far away and in the meantime is determined to live it.  So, rather like most teenagers then.
The comedy is broad, occasionally crude, sometimes biting, but rarely mean. Jonathan Harvey has created a crackling collection of both spoken wit and visual jokes and a true sense of the late 1990s which was an odd sort of time. The plots- whether derived from Doonan’s book or dreamt up by Harvey - are the stuff of great comedy, especially in the second series’ more ambitious reach. The mood is frivolous, likeable yet underscored by realism. Simon and Kylie never do pirouette their way to the top like Billy Elliot, instead each episode concludes by returning them to the mundane tribulations of family life.

The series also delights in using traditional sitcom tropes and making them fresh, particularly the husband and wife sitting in bed reading and chatting thing that we’ve seen a zillion times. With Debbie and Andy however, this is used as an aside, a comment on what’s happening. Oh and Andy’s a plumber but look at the intellectual books he reads. There’s the visiting in law; in this case one episode is devoted to Andy’s mum – played with gusto by Brenda Fricker- whose benign Christian outlook has been usurped following an operation by a nasty streak a mile wide; Simon christens her Narg.  It’s a hilarious episode, so much so that her fate at the end will still have you laughing. One episode has Frances Barber as a supposedly worldly wise teacher who seems to epitomise the boy’s dream life. Then there’s Aunty Hayley. Not really an Aunty at all, she is Debbie’s blind ex- hippie best mate who is determined to live life to the full, Played like a whirlwind by Meera Syal she is the reason why you should never watch the series while drinking a coffee because she will say the most outrageous or silly thing and there goes your coffee! Mind you Harvey writes his characters so well that every once in a while, you’ll notice a sadness to Hayley that takes you aback and only goes to make her more likeable. Not that it is allowed to last too long.

Of course, there’s also the neighbours- Kylie’s mum Reba is played with all the strength of a bull by Sarah Niles and Harvey make us want to dislike her. She spends much of the time trading insults with Debbie- and these sessions are worth watching it for alone- or hitting Kylie over the head and calling him “batty boy”. We don’t learn the background to her story till season 2 but it does surprise and you begin to understand her and the fact that, really, she does love her son. Two other very amusing characters are the Scouse headmistress who speaks like Cilla Black and starts most sentances with “I’m not being funny but…” and Stacey Bile, the modern artist who adopts Debbie as he muse in an episode that also features a statue of Kate Winslett and Hayley attempting to drive!

One aspect of the series that does loom large is mortality. During the 12 episodes, three characters die, each of them in tragi-comic circumstances, including someone being impaled on a model of the Eiffel Tower and someone else killed by an exploding microwave. Doesn’t sound funny but it most certainly is! Then there’s a riotous funeral when Debbie’s gin loving hairdresser Tameka is buried and Hayley ends up being pulled into the grave by her guide dog. Yep, still funny! Even funnier is when  Tameka Empson who played Tameka returns in the second series as Johoyo an even less skilled but more eccentric hairdresser who doesn’t even know what scissors are. Tameka Empson’s  outrageously large performance is one of the highlights of the series.

Needless to say there are plenty of near the knuckle outrageous sight gags, notably the Fit Farka (words cannot translate), the constant stream of insults between characters and pretty much anything Aunty Hayley says. Harvey also includes some very simple humour that works so well, notably the conversation between Debbie and a neighbour in which they constantly call each other by the wrong name.

Music is important to the show of course and there are many musical highlights on a well considered soundtrack. As you might expect there are several faux musical sequences, not all of them meant to be taken seriously at all. There’s nothing though to touch the joi de vivre of the sing off as the different families on the close prepare to take their children to the school musical audition- this is Glee without the ultra polished performances but with fun.  Young Simon gets to duet with the real Elaine Page at one point and there is really funny glimpse of the family performing an imaginary Eurovision song. There’s some clever use of television too- notably during the episode set around Princess Diana’s death and also on one occasion in each series when Simon and Kylie contrive to find themselves in both Live and Kicking and the Eurovision Song Contest! Harvey blends the different strands of he series well - in the second Simon’s sister Ashleen’s pregnancy is an undercurrent all the way though to the last episode when it takes centre stage. He is also sure to balance his portrayal of events meaning Simon ends up as a sympathetic but not wet character.

There are subtle differences between the two seasons- Simon is noticeably more mischievous in the first, he and Kylie openly criticising a student teacher’s looks in  almost the opening scene and in the third episode  Simon’s trick of fooling his mother that she is hearing prophetic voices is the cause of much trouble. By the second series Simon has become more sure of his preferences and therefore more dissatisfied and restless with his life as he sees it.

There are many, many more highlights but the best thing to do is watch it and enjoy them for yourself. It seems there will be no third series which means that these 12 episodes will be treasured and hopefully discovered by more people as time goes on. As Simon himself would declare they are “the epitome of fabulosity!”