The War of the Worlds Episode 3 review

“Somethings got to happen soon” says Amy mid way through a drawn out siege but I wouldn’t bank on it! I’m not sure what to make of this closing episode at all as it feels like a large chunk of storyline has somehow been removed from what should surely have been a 4 part series. Then again the pace of episode 3 is so languid it sometimes feels like there isn’t enough material to fill it. If the results stop short of the epiphany that Peter Harness might be expecting his audience to have then it’s affecting enough on an emotional level. However it is very slow indeed and some crucial moments of tension just don’t seem to work. Can hiding under a reasonably tall table really mean a whopping great Martian won’t spot you? Where is the `let’s pull someone from under the table` drama? Harness certainly goes for the profound aspects of the scenario but when it comes to the scares or the action this episode is lacking which is a shame. 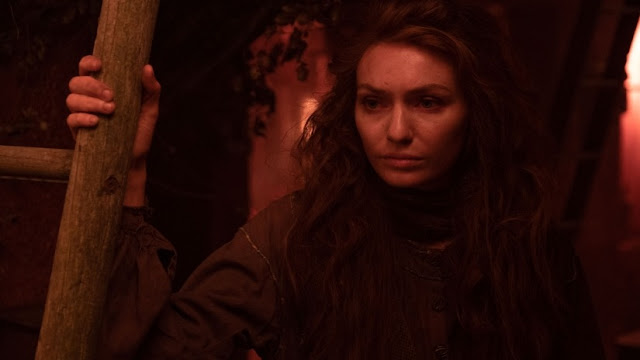 So our characters are pretty much where we left them last week- holed up in an abandoned refuge in the post invasion time and struggling through the post- apocalyptic world long after the Martians themselves have been defeated, a victory they don’t even show us. Actually the problem with HG Wells original book is its ending and nobody has really been able to bolster it over the years. I recall that Tom Cruise version puttered out similarly. Why can’t someone write an exciting ending to this story? The ingredients are there but just like Wells himself adaptors seem to come undone at the climax.
If you happened to watch this on its BBC` broadcast it probably didn’t help that it followed a particularly gloomy episode of His Dark Materials meaning viewers who watched both had two hours of unrelenting grimness. It was never a good idea to schedule these two series back to back or even have them released at the same time of the year. Yet you can’t blame scheduling for the content of the episode. Sometimes- and this applies to a number of the year’s keynote dramas- writers and producers seem to forget we do want to be entertained as well as given thought provoking material. Relentless darkness and downbeat themes without a lighter counterpoint are a turn off for a lot of viewers. Given an opportunity to bolster what has always been an unsatisfactory ending, the team could have resorted to a clichéd but dramatic scenario wherein Ogilvie and Amy brew up something that will see off the Martians but have to get inside their lair /hive/HQ to deliver it.
Credit Peter Harness though with an attempt to frame a science versus religion debate as we sail towards that end. The scientists, the thinkers survive whereas the politicians, the soldiers and even the maids die. You could feel that there was something more Peter Harness wanted to say but nobody said it. I just hope it wasn’t “war is stupid!”
It turns out to be Ogilvy who is the key character and when he tells his thrilling escape story you wonder whether the whole thing might have been better centred around him. He comes up with the answers and sure enough the almost final shot is of literal green shoots suggesting a happyish ending. Yet equally its hard to imagine that no other characters at all has thought of this.
The other thing I realise now its over is how relatively little we see of either the iconic war machines or the Martians themselves. This may be a budgetary thing or is it that Peter Harness isn’t really that interested in them? Well HG Wells wasn’t and in that sense the production is faithful enough using a heightened threat to emphasis good and bad human qualities. Then again why go to the bother of war machines and scuttling aliens when you could just do a nuclear war drama? There must be something interesting about Martians!
There are some powerful scenes – George’s sacrifice to save Amy and also Amy’s monologue to her dozing son about the world as it was. Rupert Graves’ performance throughout has been unashamedly large and entertaining and Eleanor Tomlinson’s been faultless (even if the character has seemed reluctant to make any decisions). Its just that I expected a lot more from this third episode which seems to drift for too long.
So part 3 doesn’t spoil the sterling work of parts 1 and 2 but neither does it fulfil the potential they raised. I think there’s a missing part 3 somewhere- a hectic, chase a minute drama that would earn the production the right to end so slowly. Like buses there’s be another War of the Worlds along soon I’d bet so maybe next time….?