Trickery and deceit are on the agenda this week as Lyra tricks King Iofur, Boreal does his best to fool Elaine and the final scene suggests that Asriel is most definitely not to be trusted either. Punctuated by some well composed landscape shots and a powerful battle between two mighty bears the episode is a bridge to the finale that starts to draw all the strands together if a little too hastily at times. 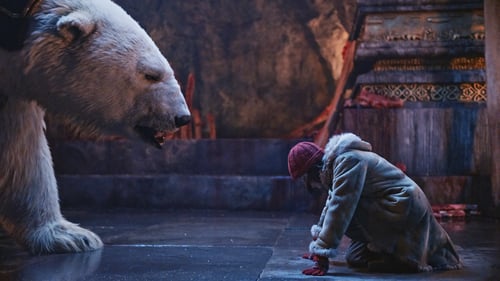 The episode shows just how Lyra is as wily as her antagonists as armed with a little information from a slightly handily present prisoner she plays on the Iofur’s self- centred nature spinning quite a yarn about bears being able to have daemons to convince him to take on Iorek in single combat rather than have his guards cut him down. If this gambit seems a tad contrived it does play well allowing Dafne Keen to shine yet again in a different manner to last week. Voiced by Peter Serafinowicz, Iofur is a mighty screen presence and again you can only marvel at the high level of facial expression the creatures convey. Interestingly director Jamie Childs chooses to show the climax to this fight in the background of a cowering Lyra, a lovely nod to the literary origins of the story. The polar bear’s palace looks magnificent, stone steps, pools of blood and carved ornaments aplenty. Even a decade ago you’d imagine a production would struggle to produce this sort of set but here it is completely convincing
Nonetheless the narrative seems a bit rushed compared to the measured pacing elsewhere with Iofur’s desire to be more human passed by in a few lines when it’s a significant driver of his actions. In the end it felt like we’d never got a chance to understand Iofur before he was killed. And didn’t someone say a few weeks back that bears are nearly impossible to trick?
Elsewhere there’s more demonic behaviour from Mrs Coulter with Ruth Wilson relishing the opportunies the role presents. Whether screaming like an animal or charming her way into persuading Father McPhail to let her accompany the Magisterium’s mission up North she is believable. Her oddest scene is her meeting Sister Clara in the ruins of the facility. Unhinged and vengeful one moment, regretful the next this was a confirmation of Mrs Coulter’s instability.
News does seem to travel fast though; Iofur’s demise is soon common knowledge. I’d suggest that had the Will Parry storyline not been drip fed into this first series it would have allowed a little more time for the main story. As it is that storyline continues to seem like something from another production altogether though this does emphasise the different worlds by using a different palette. As a thriller the story sparks this episode as Will finally starts to be more pro-active ending up accidental killing an intruder in the house and this is actually how we first meet him in the books. Now we’ve joined him at the place he enters the written story I’m not really sure if those additional moments have added a lot that couldn’t have been told at the start of a second series.
There’s a chilling quality to the reunion of Lyra and Asriel when the latter spots Roger suggesting that something like the sort of terrible experiments we witnessed last week are still being carried out by Asriel at his isolated facility. Everything is in place for a gripping finale.
Posted by John Connors at 10:19