This excellent concluding episode has the rhythm of a feature film with sweeping action sequences interspersed with quieter character moments. It successfully brings the plots together as both Lyra and Will’s storylines seem to converge and clues are lain for the already confirmed second series. In some ways it has the most straightforward plot of any of the episodes as the Magisterium converge on Asriel’s isolated mountain bolt hole he struggles with the conflicting demands of his ambitious scientific work and feelings for the daughter he thought he’d left safely back in Oxford. 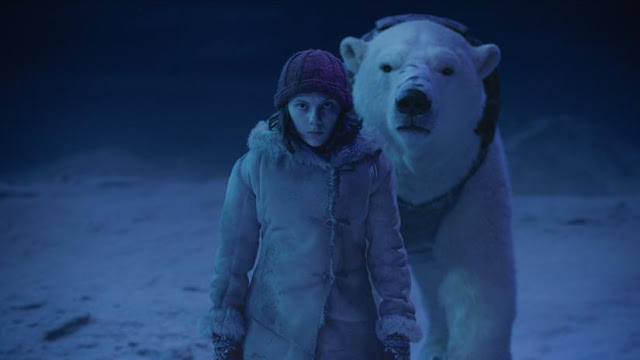 At this juncture its difficult to say which of Lyra’s parents are worse and the episode shows their similarities. Both are involved in the study of the mysterious Dust though to different intents; Mrs Coulter to further the reach of the Magisterium, Asriel to overthrow it. Both are prepared to use innocent children to further their work yet recoil at the thought of any such harm coming to Lyra. Both have also justified this work in similar arguments. Unlike the film adaptation which more or less ignored them the religious connotations are underlined in this episode. Dust is presented as an allegory for original sin or more and when Asriel lists the ways in which religious tenets can be used to control the population you realise why Philip Pullman’s original books were so disliked by the real church. The author did his work though and history offers plenty of evidence to support his ideas about religious control.
For the audience any sympathy we might harbour for Asriel as some kind of maverick freedom fighter evaporates when he uses poor Roger- surely the sweetest kid ever to inhabit a story- as a means to enable his movement to the fabled other worlds. Even without having read the books this move was predictable but even having read them the way the production mounts it leaves you thinking that perhaps it won’t happen. Somehow. Lyra’s struggle to reach the summit in time is the series most edge of seat moment but it all ends in tears. The visual use of a physical blade- even though the process is all wires and static - seems to make it even more brutal to watch. It’s a bold gambit for what is ostensibly a young adult story but a rewarding one nonetheless. Life can be cruel and stories aimed at younger people that try to pretend its not are probably doing more harm than good.
You have to praise Lewin Lloyd who has brought Roger to life in such an honest way which makes his demise even more shocking and once again Dafne Keen who has a lot of different things to convey this week and manages each with such skill. It is rare to see young actors able to be so natural and nuanced yet totally in tune with the moods of the drama. Two examples- the playful scene with the two of them in their impromptu tent is so childlike and normal contrasted with the way Lyra struggles to comprehend Asriel’s single minded intentions. 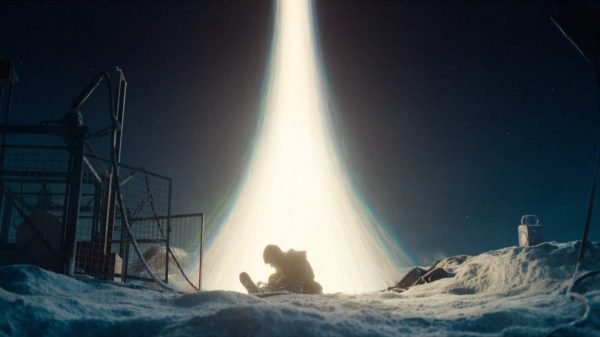 There’s plenty of visuals large and small to admire with scenes of airship artillery pounding the snowy mountain tops as bears fire back right down to the beautiful photogram of the northern lights. The effects in the series have been outstanding and the production has successfully created an alternative world with subtle touches rather than a full on steampunk vision. It is interesting to note that the credits have a different director listed for the `real world` scenes which revolve around the search for Will.
As mentioned before the decision to bring his story forward – made partly it seems due to Dafne Keen’s restricted work hours- has had mixed results as its seemed to drag in contrast to Lyra’s pacier tale. This is a minor niggle though and it works far better this week with a sense that they are on parallel journeys towards each other as the staircase section in the opening title sequence suggests.
There isn’t a happy ending but there is one that makes us want to watch the second season as both Lyra and Will step through their respective portals leading to wherever. This has been a terrific series packed with incident, ideas and emotion adapted from the novels with skill by Jack Thorne in a way that constantly draws the viewer to new scenarios and changing situations. It easily guides you through what could be an overly expositional tale with enough visual panache to keep you involved and a perfect cast. Though part of one story each episode has had its own sense of identity while maintaining the focus on characters and the bigger picture. One of the best dramas of the year and I can’t wait for the second series.