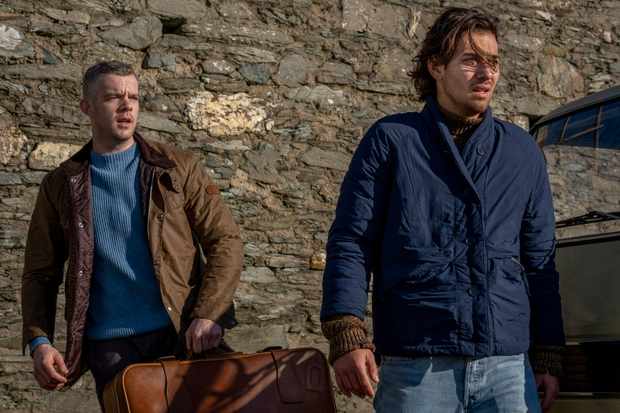 In creating the Lyons family RTD has ensured their chatty demeanour is equally well divided between levity and being bold about serious issues. The fact that Celeste has known about her husband’s affair for longer than a year explains some of her snappier moments perhaps but when the affair is publicly exposed her response and that of Gran are full of raw feelings. In a scene that could seem contrived courtesy of the family link device (a sort of future version of Alexa) over which all significant events seem to play the familiar confrontation between cheating husband and his wife are given freshness and hard honesty. It is such a well played scene especially from T’Nia Miller who pitches the well composed words perfectly. It’d be enough drama for most series but there is more to come. 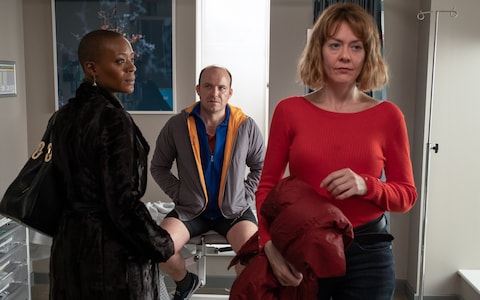 From the shadowy hue of the pictures to the fact that almost everyone they come across seems to just look untrustworthy, Daniel and Viktor’s progress (and sometimes lack of progress) resembles some World War 2 escapade rather than a trek across modern peacetime Europe. Yet the writer has already set a scene of a Europe disintegrating – “the whole world’s on fire” - with revolutions, militaristic regimes and checkpoints. It may be set in 2027 but we have seen this in real life. Long since retreated from the news front line the plight of refugees piled high on flimsy boats unable to properly support them was a familiar sight not that many years ago and has clearly left its mark on Russell T Davies. To us watching the news back then these were faceless people whose situation only seemed to cause a rise in anti immigration and a fever amongst politicians who did not know how to respond except by closing more borders. Now heightened by the presence of two characters we know the final segment of the episode sees that familiar situation play out again and in a few seconds of flash cuts depicting storms, water and chaos the camera pans directly to a number on a beach next to a body. In an unexpected turn it is Daniel rather than Viktor who doesn’t make it.
Its bold dramatically but if it makes just a handful of people rethink their attitude to refugees then it will be even more valuable. It also shows- alarmingly- how some relatively small social tweaks could bring it round again and I don’t doubt it still happens today. The trouble with most politicians is that they operate within an arena designed for politicians – in the series this is why Vivienne Rook becomes popular because she doesn’t – and people react against that. A drama like Years and Years puts names to faces in situations we would perhaps never encounter. Having spent the episode hoping both Daniel and Viktor would get out but suspecting that they might not what actually happened seems somehow even worse. All they wanted was a boring life! Just like the “boring” news the family joke about at the start of the episode.
Almost as a by the by Vivienne becomes PM by the episode’s end and if you think someone could never do that with very few polices and just matey soundbites well perhaps Nigel Farage is watching with some optimism. And as RTD himself suggested in a recent interview Vivienne is also all of us, the modern outspokenness that comes from the comparative safety of our social media.  Or as the famous phrase goes “quick to judge, slow to understand”. A better slogan for our times you’d be hard pressed to find. The further this fascinating series treads into the future the more worryingly familiar it seems.