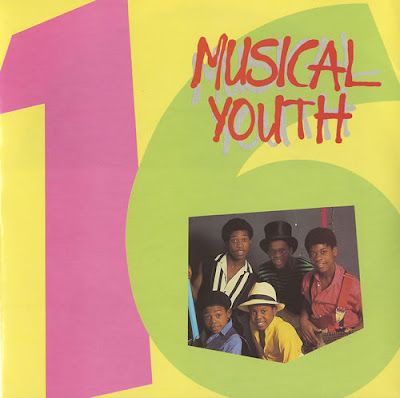 [4] Queen: Radio Ga-Ga. On video. This is the one that uses lots of clips from Metropolis. Roger Taylor flies the Queenmobile between the tower blocks of Fritz Lang's city while John Deacon, second row, gazes around amiably and appears not to notice that someone has jammed a Harpo Marx fright wig on his head. (John- And because this video is so ridiculous and brilliant at once, here it is…..)

[5] Matthew Wilder: Break My Stride. Michael Hurll doesn't have much faith in the charisma of Matthew Wilder. He's lost in a crowd of dancers and audience cheerleaders. It's not clear who we are supposed to be looking at in the initial long shots of the stage; hint, he's in the nasty cyan top and leather trousers. Once the vocal starts it's a little easier to pick out Matthew but he's frequency crowded to the side of shots and is reduced to being a spectator in his own performance. (Fact John- Though he only had this one hit Matthew Wilder continues to write songs and produce to this day. He even wrote a song for Miley Cyrus)
Best British Video Award: It's your last chance to vote! Apparently Plastic Bertrand doesn't qualify for nomination with Ca Plane Pour Moi; not British, released in 1978, and no video. Oh well. I'll vote for Adam Ant's Puss 'n Boots with it's gang of terrifying red-eyed robot mice.
[6] Fiction Factory: (Feels Like) Heaven. Fiction Factory return to inflict fashion crimes on the Top of the Pops audience. The top half of the lead singer is presentable in a Japanese style dark top but the shirt mushrooms over a nasty pair of grey high-waisted trousers. The worst offender is still the keyboard player who wears the same vile patterned shirt from Fiction Factory's last appearance. Can't someone afford to buy him a new outfit? It might feel like heaven but it looks like polyester.
[29] Thomas Dolby: Hyperactive. There's a lot going on which is appropriate for a song called Hyperactive. Unfortunately all the elements cancel each other out and the result is a track that leaves an indelible blank on the memory. The video is a montage of images and video effects that would be implemented more successfully by Talking Heads and Peter Gabriel. Watch out of the bit where Thomas Dolby is pulled apart like Tom Baker in the Doctor Who story The Leisure Hive. 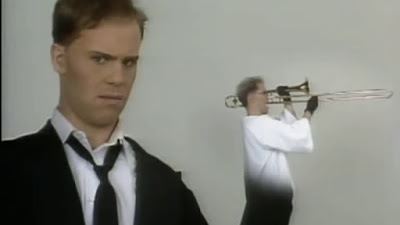 [18] Thompson Twins: Doctor Doctor. Top of the Pops has introduced a new three stage set of captions for more uniform presentation. Stage one is a column of squares revealed by a wipe that travels from the bottom to the top of the screen; stage two, the band name and chart position fades in; stage three, the song title. The limitations of 1984 technology mean that a visible line travels up the screen as the column of squares is revealed. These captions were introduced on the 26/01/1984 edition which was not repeated by BBC4 to comply with Mike Smith's wishes. The Thompson Twins have brought a complicated set of percussion with them. There's kettle drums, weird bongos, and what appears to be a variety of different sized cymbals hanging from a frame. If that lot fell over it would sound like the percussion track to Hyperactive.
Top Forty Countdown: Blimey this goes on a bit. All the way from 40 to 11. Hang on a minute...
[25] Juan Martin: Love Theme From The Thorn Birds. Snipped invisibly by the BBC4 editor who seamless joined two chart countdowns together. Presumably those clips from The Thorn Birds were too expensive to clear. The original chart must have run from 40 to 25, because that's when John Peel takes over vocal duties and if you listen carefully there's a slight hitch in the music. 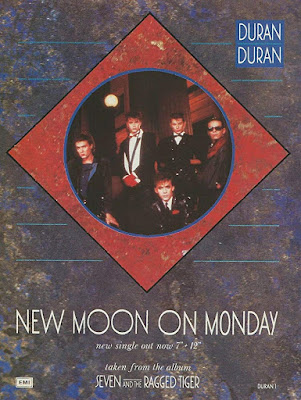 [12] Duran Duran: New Moon On Monday. On video. In Wild Boy: My Life in Duran Duran, Andy Taylor writes. "Our least favourite video of all. Everyone in the band hates it, particularly the dreadful scene at the end where we all dance together. Even today, I cringe and leave the room if anyone plays the video... to be honest, it was just a load of gibberish. The set was dark and cold, and we spent most of the day drinking alcohol. By the time we were dancing at the end I was half-cut. It is one of the few times I’ve seen Nick dance (watch his shoulders moving up and down if you ever get another chance to see it!)." Top of the Pops cuts the video short to spare Nick Rhodes' blushes.
[26] Manhattan Transfer: Spice Of Life. The chart countdown gets to number one and just stops. Frankie Goes To Hollywood is at number one and must not be played lest it corrupt the youth of the nation. A friend claimed at the time to have heard this song but I was not fooled by his lies. In 1984 there were NO other sources of music. David Jensen leaves a pause between the end of the chart and his goodnight speech. It's just long enough to make clear his opinion of the ban.