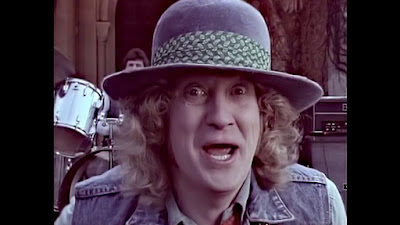 [3] Thompson Twins: Doctor! Doctor! On video. It's all terribly self-conscious and eighties. It's even got ice dancing in it. The most 1984 sport possible following Torvill and Dean's triumph at the Sarajevo Winter Olympics.


[8] The Style Council: My Ever Changing Moods. The Style Council have an uphill struggle to make an impression after Slade's infectious fun and the Thompson Twin's big-haired preening on video. They certainly made no impression on me as a 12 year old. I suspect I wrote their songs off as grown-up music for old people.


[19] Shannon: Let The Music Play. Gone from my BBC4 copy. The phantom editor has snipped out J-hn-th-n K-ng's US Chart rundown, and taken Shannon as well. Presumably J-hn-th-n K-ng introduced the video and there was no easy way to remove his link and leave the song without a visible edit. Has the masked editor been extra busy tonight? Peter Powell's introduction at the top of the show seemed abrupt and Simon Bates was uncharacteristically tight-lipped. Did Simon Bates have a line welcoming viewers to Top of the Pops which included Mr K-ng as one of the forthcoming attractions? 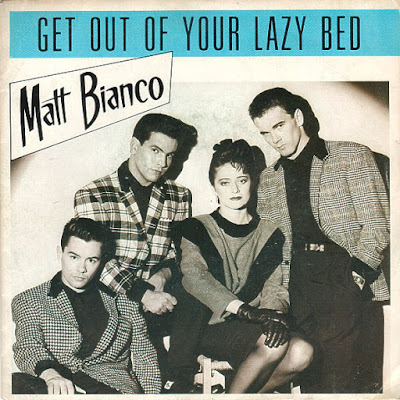 [36] Matt Bianco: Get Out Of Your Lazy Bed. About a month out from their moment of notoriety on Saturday Superstore. Matt Bianco look very now (now being 35 years ago, obv); singer Basia is wearing a sharp jacket and skirt combination with matching v-shaped poncho to emphasise that classic padded shoulders look. Matt Bianco are also the 1984 end of the rockabilly revival which included the Stray Cats, the Polecats, and some bands that probably didn't have the word cat in the title.


[11] Nena: 99 Red Balloons. It's Nena, with the first of 1984's multiple songs about nuclear war; Two Tribes, Dancing With Tears In My Eyes, The War Song, 2 Minutes To Midnight, Hammer To Fall*, and of course It’s Raining Men by The Weather Girls (the men having all been blasted up in the air by the nuclear shock wave). 99 Red Balloons is also the jauntiest of those songs and at 3 minutes 48 seconds in length it's ideal listening if you are in front of the record player when the four minute warning unexpectedly sounds.


*Available on K-Tel's gloomy compilation Now That's What I Call Global Thermonuclear Annihilation, buy part one now and for free you'll also get shown fear in a handful of dust. 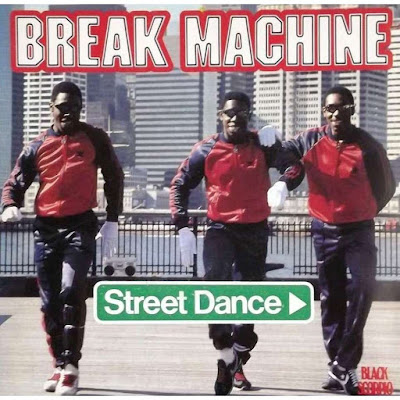 [27] Break Machine: Street Dance. No acknowledgement from Simon Bates or Peter Powell about the non-appearance of Relax; now in the fourth of its five weeks at the top of the charts. It's difficult to convey just how odd this seemed at the time and the longer Relax stayed at number one the more stupid Top of the Pops looked, as if the general public were taunting the show. Like all censorship it was ultimately self-defeating. A friend at school explained to me why the song was dirty, although he was somewhat hazy about the precise details, and all it did was introduce me to a whole new set of concepts. I finally saw Frankie Goes To Hollywood sing Relax on ITV and like a lot of baffled 12 year olds I subjected the song to a forensic analysis to locate the smut. I didn't find it. All that stuff about relaxing and sucking was plainly instructions on the right frame of mind to hoover the house. Top of the Pops ends with Break Machine performing dance moves that wrecked coats in playgrounds across the UK. And watch out for the confused caption which claims tonight's show is copyright 1983.
Posted by John Connors at 22:02