Most puzzling of all is the result of a 2018 survey which discovered up to a third of millennials are prepared to entertain doubts that the Earth is round. YouTube is being blamed for the increase in flat earthers – anecdotal evidence has people claiming they had changed their minds after watching videos on the subject. One video is called `200 proofs Earth is not a spinning ball`. People seem convinced enough by such things to ask questions such as “where is the curve?” and why the horizon always appears at eye level.
Of course thinking the world is flat is a fairly harmless preoccupation and it is interesting that despite their view no flat earthers ever seem to have tested their theory by for example hiring a boat and sailing till they find the edge of the world. However the idea that anyone at all in 2019 would believe such a concept is more than a little concerning when you think what other things people may not believe. For example, a recent report suggested an increase in the number of people who don’t believe the Holocaust took place. Again despite irrefutable evidence. Do they believe the Second World War even happened? Perhaps it’s just wish fulfilment? In which case I’d like to be the first in the queue to not believe we had a referendum in 2016 so we don’t need to leave the European Union!
It is understandable that centuries ago people did believe the world was flat. After all they’d never seen it from above, they had no concept of geography and topography as we do now and if you stared out across the ocean it certainly looks flat. Some of the theories of the past on the topic are a film maker’s dream. People believed such things as the sky being a dome with the Sun and planets embedded in it or the earth riding on air. Or the sea runs out in the form of a large waterfall or just nothing at all.  My favourite one is that the Earth is surrounded by walls of ice which incidentally are guarded by NASA who keep us preoccupied with all their fake space travel and pretend science, the scamps. What happens if you tumble over the edge? It seems you would fall into space or some sort of infinite plane. 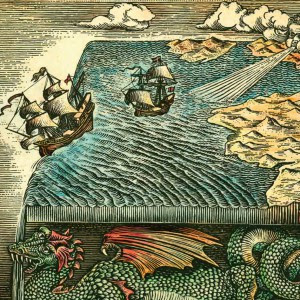 While the idea never completely went away scientific enlightenment ensured most people eventually realised the world was not flat. Now that it is easier for misinformation to spread it seems that easily impressionable people are again believing the concept - in 2016 the Flat Earth Society had 555 registered members.
A convention on the topic held in the Midlands in May last year had more than 200 attendees.  It was here that one speaker came up with a delightful theory as to why aeroplanes don’t just fly off into space when they reach the edge of the world. Apparently it’s because rather like the old game Pac Man they teleport from one side of the planet to the other!! Presumably ships have the same ability. The speaker doesn’t appear to have elaborated on exactly how this happens or why planes can’t just teleport from one location to another thus saving lots of travelling time. Some wags have suggested there should be reality tv show wherein flat earthers utilise various modes of transport and race to find the edge of the world. Such a programme could run for some time.
I suppose this is all symptomatic of an age when we question everything which tends to result in believing nothing either. Yet it is bizarre that in the face of such overwhelming evidence not least their own experiences there is still anyone at all willing to really believe such a theory as the flat Earth.