If you’ve watched any of the BBC this week you can’t have failed to have noticed the advert featuring a sprout. Sprout Boy as he is known is the Corporation’s unusual choice for their festive mascot this year and features in an animated trail for the season.  In a Christmassy mess (a Christmess?) our green hero can’t get anyone interested in him until he stumbles upon a house where all the BBC’s stars live together- I always knew this happened- and is accepted and made welcome. He’s happy, we’re all happy. However one word of caution- surely Sprout Boy is destined for the Christmas table along with other veg and potatoes? He may be celebrating prematurely! I bet an hour earlier the BBC house welcomed Sally Stuffing and now she’s warming in the kitchen! 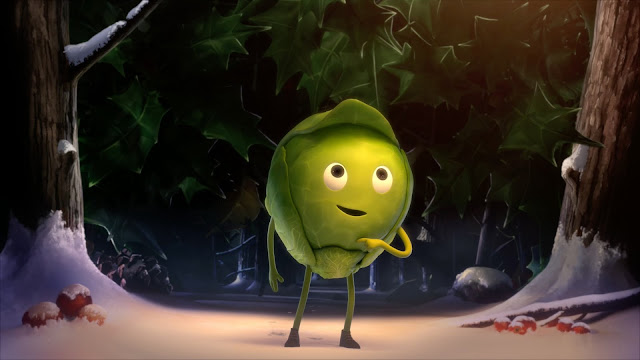 "The campaign shines a light on BBC1 bringing the nation together in their millions through its line up of Christmas schedule programming, characters and talent," says the BBC optimistically. The advert was made by Rainey Kelly Campbell Roalfe/Y&R and directed by Alan Smith and Adam Foulkes with the music recorded at Abbey Road Studios. It’s actually been made in 3D for the 8 people who have a 3D set and features animated caricatures of the BBC’s biggest stars.

It is quite a refreshing change to the traditional yet it also embraces those things with which we’re all familiar this time of year. The decision to use a sprout as the icon is a bold one as this is one aspect of the Christmas dinner that seems to divide people; some like them a lot, others loathe them. Few think sprouts are just OK.
Discussing the concept of Sprout Boy co-director Adam Foulkes has said he is “like a little naïve schoolboy, an eternal optimist. He can’t help but skip everywhere. For some reason it felt right that he would wear little hobnail boots.” Deciding on a sprout was not without careful consideration though as Alan Smith explains: “A sprout is a great vegetable to bring to life but we had to be careful with scale when he stands next to humans. Obviously we had to be able to see him but if we made him too big there was a danger of cabbage confusion. And nobody wants that.” How right he is, one of the biggest problems in modern life is cabbage confusion. By some bizarre coincidence or excellent lobbying from sprouts themselves, Sky has also included sprouts in their festive promotions.


Of course generations grew up thinking sprouts were actually a squelchy mass of soggy green stuff that tasted of nothing because schools used to serve them thus. Cooking for the masses the dinner people would boil hundreds of them before leaving them in a warming tray for way too long. Thankfully nowadays each sprout’s individualism is acknowledged by the cooking process. Recently it was reported that sprouts are bucking the general food trend of getting smaller by actually increasing in size.
Sprouts are good for you too- they contain Vitamin K, C, A and B6, are very low in saturated fat and cholesterol and also a good source of riboflavin, magnesium, phosphorus and fibre. You wonder how it all fits in such a small thing. So the next time you encounter one on your plate; eat it up cos it'll do you good. Of course this could all backfire and people like sprout characters so much they won't eat the actual thing itself!